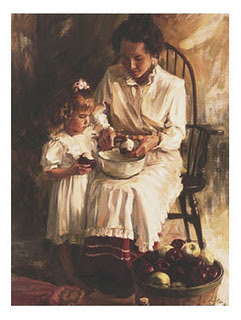 Then there was a woman in Joppa, a disciple called Tabitha, whose name in Greek was Dorcas (meaning Gazelle). She was a woman whose whole life was full of good and kindly actions, but in those days she became seriously ill and died...

Peter got up and went back with them, and when he arrived in Joppa they took him to the room upstairs. All the widows stood around him with tears in their eyes, holding out for him to see dresses and cloaks which Dorcas used to make for them while she was with them...

Then he turned to the body and said, “Tabitha, get up!” She opened her eyes, and as soon as she saw Peter she sat up. He took her by the hand, helped her to her feet, and then called out to the believers and widows and presented her to them alive.
Acts 9:36-41 (Phillips)

I just adore the story of Tabitha (Dorcas).  Have you ever thought how your everyday actions influence others?  I do quite often and this week a book I was reading reminded me of a few women whose lives imprinted on me in the area of domesticity.

As I pondered their influence, I was reminded we often think it is only important to do great things and having a platform which reaches thousands.  But I believe just being a light in a dark world will have major affect these days.

I think once in awhile of my aunt, the one who was married to my mother's brother who also developed Juvenile diabetes in middle age. I was quite small when we would visit their Elizabethtown home but her feminine touches were everywhere... that unique Southern way of combining luxury with lack.

I have to remind myself that generation was born not all that long after the Civil War (or War Between the States according to what side of the Mason-Dixon line you found yourself).  For I came along when my mother was well into middle age and she was also a late in life surprise child.  :)

What was it about my aunt that would cause a young child to recall her some fifty years later?  It was the way her small home was so warm and cozy with those little touches of culture... a little silver, good china, beautiful if somewhat shabby furniture, delicious food, and her precious smile.

She was a true Southern lady and although I only remember one or two visits to her home... and each lasting for only an hour or less... she is one of the women I wanted to be like when I grew up.

I recall my sister Bonnie's mother-in-law, especially during the Holidays as she was the amazing baker and candy maker who blessed all of us with homemade goodies each year.  Except for the occasional new doll... hers was my most anticipated gift.

She was a heavy set woman who wore her waist length gray hair up in a bun.  Most of my memories of her took place in her tiny kitchen, apron around her waist and seeming to have an extra set of hands as she ran to and fro stirring the pots and setting the dining room table and running back to turn down the heat on the pot roast.

She was indeed a maestro in the kitchen.  I didn't spend any one-on-one time with her but just watching as one of her invited guests made me want to bless others with my cooking someday.

I recently shared about another woman whose role as homemaker imprinted on my soul the kind of person I wanted to become... and I only met her "in person" for an hour or so!  She was the mother of a large household of children who were friends with my husband in his teenage and young adult years.

It was her creativity and the way her family interacted that drew me to her and I understood why this home would be such an oasis for my husband from his critical parents.

I have often thought how her faith was manifested in love, compassion, and creativity... and I wanted to be just like her.

So... what am I trying to say?  We influence others by the way we live our lives every day.  Never perfectly, of course.  My sister's mother-in-law could be difficult at times (can't we all?).

But as we set a pretty table, light a scented candle, simmer chicken soup, bake an extra loaf of homemade bread, knit a scarf or crochet a warm afghan, surprise those we love with popcorn and hot chocolate (can you tell it is cold where I live?), send a letter in a card we made, read our Bible, say a prayer, and offer hospitality to the brokenhearted... we influence those whom God has placed in our life.

The three women above had no idea they were influencing a child and later a young wife as they went about their daily activities.  Don't ever think you are not doing the work of God because you have no pulpit... oh, no... for your pulpit is your home!

Picture:  Apple of Her Eye
Posted by Brenda@CoffeeTeaBooks at 11:13 AM

I think yours is your blog, though your home is surely right up there and a part of the whole. Lovely post, Brenda. It has me thinking about those special women and how they made me feel when I was in their homes.

It's a bit chilly and rainy here, too, so there's chicken-corn soup simmering for dinner. I made a batch of your citrus tea cookies earlier today, a lemon version, and I am under strict orders not to tweak the recipe. They are THAT good! (Is the orange version as good? I love orange flavored treats). Thanks for another great recipe.

How's your crocheting going? I can't seem to get started on my knitting projects. I need to paint and repair dog-damage to my garden, so the knitting is on the back burner. The newest dog is a digger and a chewer, unfortunately, and she has been a bad influence on the slightly older golden retriever.

Are you watching Upstairs-Downstairs? I'm not sure I can get into this one.

These are such inspiring words. Several of the "lines" will be a long time in my memory bank. Like the one about your aunt who combined "luxury with lack"...

I would be so happy if someone who visited our home would feel it was warm and cozy with...little touches of culture.

Yes, we DO influence others with our everyday actions. It's important to realize this, I believe.

Nice post about how sometimes we don't know we are influencing people, when we are.

I sometimes wonder what kinds of memories my children will take with them into adulthood because I too have these kinds of memories, random in some ways, about people and how they influenced me. I hope Rachel and Laura will have the gift of other women influencing them as well.

Oh yes, I agree! There are women who influenced me, encouraged me, and probably didn't know it!

I am hoping with my girls to be an influence and also perhaps for other young women.

I liked the line 'Your home is your pulpit.' Very true.

Yes the precious women I admired and influenced me so much had little too. Little as far as wordily things but riches as far as feminine touches and welcoming smiles. Rich in love for others. Their influence was immeasurable. I got to write and thank a few but wish I had taken the time to personally tell the others how much they truly meant to me. Just being around them...as you said, they may never have even realized little eyes were watching and learning. It does take on a different thought of how are we seen to the ones who around us? We are to be light even when we are not preaching...cause the way we live is because of our values we learned from Him. As it should be. good thoughts Brenda. I loved hearing the story about Dorcis again too. Sarah

Beautifully said Brenda...an often overlooked point as well. We never know what influence we have on the world...good or bad. With that in mind, your gentle reminder to make a conscious decision to make it a positive influence is appreciated.
Love,
Tracey
x0x
P.S. I enjoyed your remembrances of women who's positive example have touched your life...such a lovely way to make your point even more clear!

Such a lovely point Brenda...and very well made! We all make our mark on the world and...be it a positive or a negative one...the choice is our own. Thanks so much for the gentle reminder.
Love,
Tracey
x0x
P.S. Please forgive me if this is a duplicate...had trouble posting the first comment!

I love this post because I have women like this in my life, too. A lot of them have passed on to glory and I miss them. I have many, many faults but I do want to be someone who imparts love and comfort and compassion onto others, especially those of my own house (which sometimes is the hardest to do).