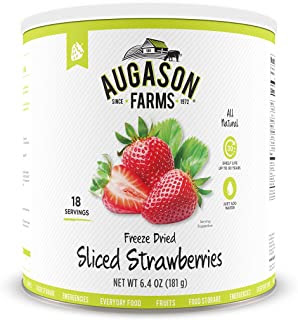 It was around five years ago (a year more or less) when I heard the owner of Augason Farms state that he was concerned about the future of food in general and the freeze dried food industry specifically.  Even at that time, it was becoming more difficult to obtain all the ingredients they needed and he foresaw prices continuing to rise.

A lot of people thought he was over reacting and I have often wondered where there thoughts are now.  He wasn't a prophet, just a wise businessman who could see what was happening in the food industry. If ever there was a time we need to build up a pantry, even a very small pantry, it is now and a couple of headlines prove it.

You may know that Augason Farms closed for awhile to catch up on production and then stopped taking orders on their own website.  I understand that they are still having enough challenges obtaining all the food they need to freeze dry that they are selling their products only through retail at the moment.  I just checked and that continues to be true, all products on their website are "Sold Out".

Amazon still sells their product and even when it is in stock, the prices have gone up so much it amazes even those of us who knew price increases were on the way. I have a couple items on my Wish List to check if there is a sale.

Augason Farms was the first company that is selling mostly retail and now it looks like, at least temporarily, Keystone Meats is concentrating on their retail market.  I checked and all but one of their canned meat products were sold out on their website.  I have heard on various YouTube channels that people are hit and miss on finding any of the canned meat in parts of the country, especially at WalMart.

However, in the Midwest where I live, I have seen both Keystone chicken and beef on the shelves at Meijer and at Kroger this past year.  I don't shop Wal-Mart often enough to know if they were in stock there. Kroger is the only store in the area I know of that sells the smaller cans of beef and chicken but I think you get more meat per cost with the larger cans.

I have seen their cans of pork available off and on and imagine my surprise (and delight!) to find their ground beef in stock at one of the stores in town.  I used most of my stock up budget to buy two cans for the pantry.  They were now $10.00 a can!  However, ground beef has not been available for a year or more and I do like having it on the shelf for quick meals.

I have not heard when and if they will begin selling at their website again.  I have heard, however, to stay away from buying any at Amazon for they were unbelievably expensive.  I checked and it looked like every seller was charging at least twice what the cans would sell at the grocery store and some of them a lot more than double the price.

Another company that is having trouble getting both the ingredients and the employees needed to produce their freeze dried meals is Mountain House.  I heard last week that they have decided to stop selling to retailers and they are doing the opposite of the other two companies, they are going to be selling their products only through their website.

The news report said when their products are sold out of what stores have now, they will not be able to purchase any more.  So, when I was at Meijer for my stock up shopping day this week, I made a special trip over to the camping supplies where they sell Mountain House pouches for campers and there were only about five or six dinners available now and perhaps only a few pouches of each.

I have not purchased any Mountain House pouches since the beginning of COVID when they changed their pouches to hold less product and raised the prices a lot.  If I were going to be climbing mountains and needed their light weight meals to put in my backpack, it would be worth it I guess but I have no plans to climb anything soon.

All of this has reminded me what the Augason Farms owner had warned many years ago.  He saw what was coming and that was before the world went crazy (crazier).

I get a lot of questions on how I fill the pantry given a limited budget and even more limited space.  I thought I'd try to answer the best I can. What I purchase depends on how much I can spend so there were times I only bought a couple packages of 15 Bean Soup beans or a couple packages of pasta.

I would buy white rice a small bag at a time so I could set it aside in case of an emergency.  Although for regular meals, I purchase frozen brown rice.  That may change soon since it has gone from a dollar a bag to $1.50 a bag in just a few months.  I will start cooking brown rice and freezing it myself.

I now have a few bags of just purchased flour in the deep freeze getting debugged and they will replace those three that were tossed "just in case".  I really want to have the most nutrients available when I make bread.  It doesn't matter as much when I make cookies, which is rare these days.

I also make certain I have the ingredients on the shelves to make the recipes I make the most according to the season.  For instance, I need to have on hand various kinds of canned tomatoes and for years now, I have just added newly purchased cans to the back of the flats and use the older cans that are in the front of the two flats.

These days, as I look at the possibilities of what we can purchase in the months to come, I have concentrated on buying one can of some protein when I go to the store and a can or two of a vegetable.  By doing that every week or two, it adds up without hurting the budget.  Except buying two cans of ground beef for $20.00!  I'm glad I have them available when needed, though.

I added some more pasta recently while I could still purchase it at an inexpensive cost.  Even then, it has gone up and I haven't seen any good sales lately.  I have a few jars of pasta sauce but if needed, I can make it from the tomato paste that takes up much less room on the shelves.  I wish I had a separate room for a pantry like I did when the kids were young but we do the best with what we have.

When I arrive home from grocery shopping, I am usually tired so I set aside the bag with the canned goods until I can look at them with the magnifying glass if needed.  I write the month and the year of the Use By date on the top of the can with a permanent black Sharpie before placing the cans on the shelf.

This makes it so much easier to make certain I am using the oldest date first to keep everything rotated.  Even if you do not have a variety of items, I find it helps a lot. I have mostly the basics that my husband and I need weekly.  Except he doesn't eat any of the smoked herring.  With a Norwegian heritage, you would think he would like it.

Now, if you live alone or you do not cook every evening, there is a simple way to stock up a little and not have to think of it all the time.  This is what I would do if I lived alone and did not cook dinner every night.

Purchase the canned goods you need to put basic meals on the table.  It could be tomatoes, vegetables, fruit, some cans of meat, etc.  Then put a box in a place where it will be out of the way and after placing the Use By dates on the top of each can, place those cans in the box.  Add pasta, rice, etc. if you have room.  Then tape up the box and write on your calendar six months from now that it is time to look through the contents of the box and replace items if necessary.

Of course, you can put together whatever you want such as boxes of mac & cheese, cans of soup, pouches of instant potatoes, etc.  Just date them so it will be easy to sort through everything.  If you need them within the six months, you will be very glad you have them.  If not, you can rotate the old out and replace with the new... then use what needs to be eaten soon.

Like I have been saying for a long time... it is better to do a little at a time than do nothing at all because we cannot do everything we would like.

Posted by Brenda@CoffeeTeaBooks at 2:41 PM

I worry about the food I do have stored. It is a bit too much ad hoc. I am squirrelling things away where my mother cannot see them because times are tough enough now. I bought a kilo of Rod River chickpeas and she freaked out. They are very large peas and are supposed to be among the best in the world. These are an Australian product and I try to buy home products first. They are also an power house of nutrition. I things continue as there are I will not be able to afford to buy meat.

Lots of good ideas in this post! I love your method of checking and rotating pantry items every six months.

With love from,
Kelly (Mrs. Kiwi)

Very sensible advice - and pretty much what I am doing. I am a singleton so meals can be very simple if I choose and a can of fruit will be 4 portions for me so I have to keep all that in mind. I estimate that I have about 4 months of food when it comes to proteins, fruit & veg and up to a year's worth of grains, pastas, rice etc. I am now looking at adding variety - things that I might not usually buy but will add variety, plus condiments. I'm now splitting my monthly grocery budget - half for fruit & veg, dairy and a bit of bread - the things that you mostly buy fresh every month - and then half towards more longterm pantry items - especially sale items of things that I can earn loyalty points on - it is a different way of shopping these days.