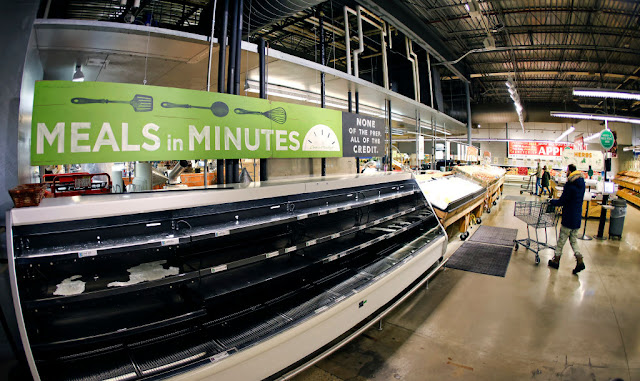 I hope fellow Americans had a good Thanksgiving.  Everything was delicious this year and we had plenty of leftovers for yesterday's meals.  There is still enough turkey left for a Sunday dinner casserole.  I didn't make soup this year and I'm fairly certain my mother-in-law knows all about it in Heaven!  ;)

I had to drop a few boxes off at Goodwill this week that have been sitting in the Study, waiting for my attention.  Since I store some items in the Study when Christmas decorations are out, it was time to give the Goodwill boxes that attention and get them out of the house.

I had talked to my daughter and daughter-in-law last year about what part of my dish collection they wanted and the only thing it seems none of the girls (including granddaughters) would want was my wedding china.  I didn't use it anymore, so I finally sent it to charity where it can bless someone else in time for Thanksgiving perhaps?  My tastes have changed a lot since I was nineteen and engaged.

While I was out, I stopped by Aldi and was ridiculously happy to see they finally had the European foil wrapped chocolates that resemble vintage Christmas tree ornaments. I have been putting a package in Piper's Christmas gift bag each year and it is time for Oliver to get his own package.  A third package was purchased for ummm... me. They make excellent decorations.

The Holiday section at Aldi still looks rather bleak with a lot of empty shelves but I am happy to get the few items I was hoping for this year.  I had purchased all the food items I would need for this week ahead of time to stay away from crowds. So, I have been hibernating and cooking.

I have been asked about favorite YouTube prepper videos. There have been numerous people I have followed off and on but those that remain are the prepper vloggers I have received the most usable information from.

One of my favorite vloggers is Alaska Granny.  She concentrates mostly with stocking up the pantry and talks about everything having to do with food and essentials.  If there is anyone you might want to go back and listen to their former videos, she is the one worth the time since she cares about prepping from the view of a mother and grandmother.

Alaska Granny can be found... here.

Another favorite homemaker style vlogger is Homestead Corner.  She also talks a lot about stocking food for emergency situations, although she will also get into some other subjects.

Homestead Corner can be found... here.

A vlogger who is a Christian and provides good updated information of interest to preparedness is Prepper Dawg (Dawg as in Georgia football fans).  Unlike the other men I will list below, he never uses bad language and usually looks at world events from a Christian perspective.  If anyone can be calming when giving commentary on headlines, it is Prepper Dawg.

Prepper Dawg can be found... here.

Alaska Prepper is very well known among the prepper vlog community.  He is close to a true old time survivalist in his teaching but he is always on top of the world news and knows what he is talking about when it comes to preparedness. If he has used any "bad" language (and I can't recall), it has been very mild.  His vlogs can be long but are very informative.

Alaska Prepper can be found... here.

Pinball Preparedness has been known to use off color language but he seems to make an attempt not to for his more Evangelical listeners.  He was very angry with another vlogger once who made untrue comments about him and let the language filter go... I just didn't listen to the rest. He can be very political but from the standpoint of what he believes is behind our current problems.

However, he has excellent information about what is going on in the world and he doesn't use "language" very often.  Just be aware it is possible.  His vlogs are short but he tends to have two or three a day.  I've learned which type I want to listen to this past year or so.

Pinball Preparedness can be found... here.

Canadian Prepper is also well known and like the two men mentioned above, is a true survivalist type prepper.  He owns a survivalist supply store in Canada.  He knows what is going on from a Canadian perspective but his information is useful for anyone.

He does not come from a faith based perspective and some of what he states may cause fear (the same with Pinball Preparedness and Alaska Prepper) but if you want straight talk about how what is going on in the world will affect you... he is excellent.  I don't listen to all of his vlogs but they are titled in such a way that you can tell if you would be interested in them or not.

Canadian Prepper can be found... here.

I don't listen to any of these vloggers every time they publish a new vlog but I do listen to each about once a week.  I listen to Alaska Granny and Homestead Corner the most.

Like I said earlier, some vloggers have come and gone either because I can't relate (for instance, they grow all of their own food) or because they are too far on the survivalist side of things.  If you have any good suggestions, I would love to hear about them in comments.

Posted by Brenda@CoffeeTeaBooks at 4:56 PM

Yes, a lovely if quiet, sort of weird Thanksgiving this year. Glad yours was a nice Thanksgiving.

One of my favorite bloggers, in the homesteader genre, has begun to urge watchers to raise quail and rabbits. it makes me nervous. 😳

I watch all but one of your list, Prepper Dawg, thank you for pointing him my way! Another one you might like is "City Prepping". I kind of equate him with Canadian Prepper, but maybe not the "scare tactics" that i feel Canadian Prepper presents.
thank you for sharing! God Bless - LynneinMN

I might add Appalachian Prepper. She shares a lot of recipes, shopping finds like Alaska Granny, and she shares carefully her political views. Another one I ran across was Clara sharing her great depression recipes. Unfortunately there aren't many, but she shares some of her stories and is so delightful. Her grandson put the videos on Utube. She also put out a cookbook. Not sure if its still in print. Its called Clara's Kitchen. Actually I think there are two of them. She has passed already. Her legacy lives on. Reading the comments on Utube warms your heart that younger people today appreciate her. Blessing, Lydia