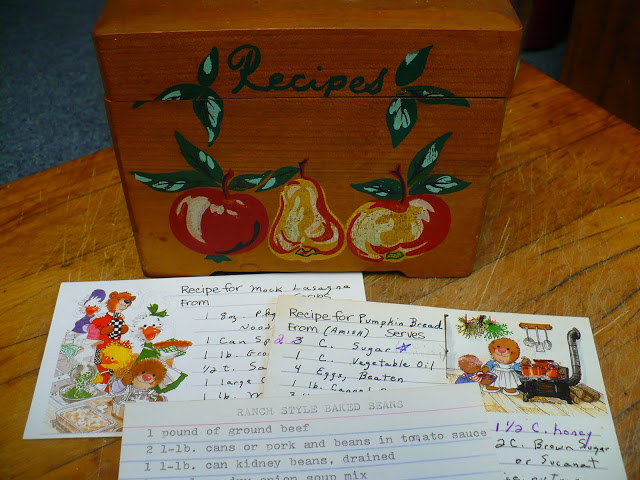 The weather has been miserable recently and I find it difficult to even think of cooking when the heat index is hovering around 100.  It is that time of year that I have fond memories of slow roasted dinners, soups, stews, and hot beverages.

I have been looking through my yellow pantry where I keep baking supplies, along with seasonings and such that I use in cooking.  I had recently used some of my dehydrated onions in the cowboy casserole and realized they were looking kinda' old.  Not bad mind you, just a little tired.

As I thought of it, I realized they had to be three years old (or more) so it was time to refresh the jar.  I only use the Frontier brand of dehydrated onions and they only sell two packages at a time.  However, they are worth buying and sharing the second package, as I've done before.

Although, the dehydrated onions are in mylar (or something similar) bags and the Use By date is three years from now.  So, it wouldn't hurt to hold onto the second bag, either.  Dehydrated onions were a part of several recipes I received from my mother-in-law long ago and they continue to work in recipes today.  However, they can also be rehydrated should you run out of onions and used apart from a specific recipe.

I've been researching dried red and green peppers for awhile now and finally found a source on Amazon where I could buy them in separate bags.  They were always sold mixed together before that.  I buy red peppers when they are less expensive in the summer, slice them, and freeze them to use in eggs, potatoes, etc.  But I wanted a good source of dehydrated peppers, too.  Both of these packages will eventually be emptied into Ball jars just like the dehydrated onions.

I'm thinking the three of them could be blended together, perhaps with sea salt and pepper, for an interesting seasoning.  Hmmmm... will think on that for awhile.  I did see in the reviews where some people were purchasing the dehydrated peppers to blend seasonings, so it isn't an original idea.

I have been looking through my cookbooks again and I will share a few more today.  There will be a few more next week so I don't overwhelm the blog post with too many (in my opinion) wonderful books.

Karin mentioned in Comments last week that she enjoys Jacques Pepin on Facebook and I do, too.  His videos are excellent and he has long been one of my favorite cooking teachers on television.  He is always a gentleman and explains the process of cooking and not just putting together a recipe.

All of his PBS series were good but the one he did with Julia Child was so much fun to watch.  Not only were they good friends but their style was different enough that their good natured quips at each other were so funny.  Not to mentioned, she called him Jack!

He was very young in WWII and was growing up in France when they had to find food where they could at times.  Even today, he doesn't let anything go to waste.  Whereas, Julia was from a more affluent background and because of the work her husband did during the war, they didn't suffer shortages like Jacques' family.  I think that is what is behind most of their culinary differences.  They certainly didn't let the differences come between their friendship.

Another favorite Facebook cook/teacher is Brenda Gantt.  She skyrocketed to fame for the cooking videos she makes on Facebook, which began just as a way to teach teenagers to make biscuits.  She is also a wonderful Christian woman and you don't have to be concerned about bad language, innuendo, etc.

The first book I want to recommend today is one of Jacques Pepin's books, which I believe is his most recent although it is an updated and revised version of an earlier book.  It is called Jacques Pepin: Quick & Simple.  If you ever wondered what a "semi-homemade" cookbook by a famous chef would look like, this is it!

He begins the book with recommendations for the pantry, freezer, refrigerator, etc. and with these basic food items on hand... it gives you most of what you need to put together a delicious meal quickly.  The only bad reviews on Amazon I saw were from people who were appalled that he would use "convenience" foods.  Personally, I do not consider frozen puff pastry a bad convenience food.

If you enjoy a little upscale cooking here and there or only a cookbook that would make putting together a celebration meal easy, this is one for you.  I have a few recipes marked to make when it cools down more, including one that is simply the frozen puff pastry placed around pear halves (I will use apples), along with some cinnamon and sugar.

The only chapter I haven't even looked through is the seafood chapter because... well... landlocked Midwest, you know.  Although, I did grow up on cornmeal breaded fried river catfish.  That is always tasty.  But the chapter is not "riverfood".

Another recipe book I love that helps give me all kinds of simple ideas is Hope's Table.  Since I first mentioned this recipe book on the blog, I have seen it mentioned as a favorite on various Instagram posts.  Hope Helmuth is a young Mennonite wife and mother.  Her recipes are both basic and the kind I would serve to company.  There are nice photos of most finished recipes.

It is the recipe book I keep in the basket with my most used (or currently read) recipe books at the moment.  Along with, The Essential Amish Cookbook, by Lovina Eicher.  I have another of Lovina's cookbooks and gave to a friend a couple of cookbooks written by her mother.  But The Essential Amish Cookbook is my favorite.  It has basic recipes with photos of many of them.

I will share one other cookbook that I go to when I want recipes like I remember growing up and in my young married days (currently I am in my "older" married days).  This cookbook would be a favorite for anyone who loved the recipes in Southern Living magazine.  Which my sister, who then lived in Virginia, sent me a subscription to for a few years... even though I lived in Yankee territory.

It is called Southern Living: Heirloom Recipe Cookbook and it is full of popular recipes from the magazine over the decades, along with many photos of "then and now".  When a photo of the recipe was on the front cover, that is often shown, too.  There are stories behind the recipes in many instances.

If you are from the Southern part of the United States, you will know that this magazine was known for having the best recipes in it.  I always loved the November issue when they would share ahead of time the best recipes for the Holidays coming up.  I used to be able to buy the magazine at Wal-mart but I haven't seen it in ages, not even at Barnes & Noble.

So, I'm wondering if they once again are not letting it be sold above the Mason-Dixon line?  The Civil War is over (aka: The War Between the States in the South).  Please sell your magazine in the North again!

All of these cookbooks have plenty of good recipes for both the new and experienced cook, and everyone in between.  I would also throw in a suggestion that the various Pioneer Woman cookbooks are excellent for newer cooks since they have photos of the process of cooking the recipe.  Especially the first two or three cookbooks.  I gave them as gifts for new cooks over the years.

It is hard to believe but next week includes my stock up shopping day.  Already.  Where did July go?  Although, since it is the hottest month of the year where we live and even though it is my birthday month... my husband and I are both ready for July to end.  Hot and Humid are not words I like, anymore.

I've been forgetting to add these past few weeks... there have been huge clearance discounts on COVID related products in our area.  I have stocked up on various sizes of hand sanitizers for 25 cents each, cloth masks for 50 cents a package of six, large packages of antibacterial hand wipes for 45 cents each (which I also use for cleaning), and quite a few bottles of high quality liquid hand soap for 31 cents each.  The only thing I haven't found is a box of disposable masks on clearance but I keep looking when I'm in a store, anyway.

Image:  My recipe box that stays on the Kitchen counter.

I've read your posts for several years, but have never commented. I learned recently that paprika is simply ground dehydrated red peppers. So combining them in a seasoning would be most delicious.

I've been eyeing Jacques' book for a while now. I watch him on a Facebook video and that man's knife skills are still top drawer. Fingers all still attached lol.

If you watch Amazon you can get Southern Living very cheap....today its $7 for a year. Those types of deals are about the only time I buy subscriptions now. Amazon or Discountmags...they give you the option of renewing at the cheap price as well.

I get subscription offers from Southern Living now and then. I took it a few years ago but it is not the magazine it once was…..are any of them? I bet you could Google Southern Living and see what their offers were. Most of these I get are amazingly low. I have gotten to using recipes from several blogs I follow and when searching for something, I go looking on the web. I find I rarely use the cookbooks I have now. I have a friend who told me about Jacques Pepin. She watches him often. I record and watch the Barefoot Contessa when she is on, Mrs. Brown is a delight, and America’s Test Kitchen on PBS give much more than recipes. Their equipment recommendations are very good, as are their product tastings. Cooks Country on PBS has the same cast. They are fun to watch. We have recently found A Taste of History on PBS. It is such an interesting show and watching the chef cook is a treat.

I love your blog and get so much from it. Thanks for sharing your thoughts with all of us!

Funny how a few weeks ago they couldn't even give masks and sanitizer away, and now we may get the mask mandate back. I bought sanitizer wipes and masks then and Saturday when I went to the store, they were low on the wipes and disinfectant again. It pays to stay stocked up for sure, especially when the items are on clearance!

Great suggestions for cookbooks... And I will admit to Betty Crocker being my go to for all the basics still ♥️