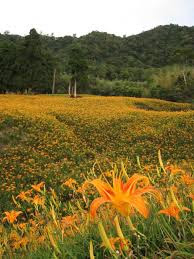 I originally wrote this many years ago but as I have been appreciating the wild lilies growing on the sides of country roads this week, they reminded me of this blog post and of my father.  So, I honor him on Father's Day... remembering the ditch lilies.

I don't have a lot of clear memories of my father since he passed away suddenly when I was only ten years old. However, one memory that I have shared with my husband and children is the clearest of all...that of Dad and the ditch lilies.

We lived in an old farmhouse when I was a small child. It had only enough land for a hand full of animals, some chickens, and a huge garden. It sat across from a grain elevator, at the corner where two gravel roads met. We had a few neighbors, mostly other smallish houses, what we would call "hobby farms" these days. Between us and the various towns in different directions, there were some "real farms" where one would find acres and acres of tall stalks of corn or soybeans growing each summer.

Train tracks separated our house and the tall grain elevator. To this day, I love the sound of the train whistles in the distance. You don't hear them much around here anymore. I remember taking walks with my dad along those roads when the evening had cooled enough to make the gravel more comfortable...for they can get quite hot for little feet. Dad was around 6'3" tall and I was but a little girl when we lived on this gravel road. So it probably is understandable that my memories of both him and day lilies are that they were both huge!

We didn't call them day lilies in our neck of the woods...they were always known as ditch lilies, for they grew wild in the ditches each summer. That's why I was thinking of him this week. It wasn't the gorgeous yellow day lilies growing along our backyard fence, nor the orange lilies next to the house, both planted by previous owners. It wasn't the lilac colored day lilies my husband planted this year. No, it was the old fashioned deep orange day lilies growing in the ditches on the roads I travel most of the time...the roads that take me "to the country". The same kind of lilies that sent us out for a walk in the evening...on gravel roads.

My dad was not an educated man as such. He only finished 8th grade, a practice very common to men of that and previous generations. Back then, many boys had to leave their formal schooling at that age to begin working. However, he knew a lot about the important things of life like flowers, and building things, stopping on trips to take pictures of animals in the field and whatever else grabbed his attention, hunting, fishing, and how to love daughters. People who knew him used to talk about his kindness.

I've been told many times that he cried when I was born because he had wanted a little girl so badly. Since this was a second marriage for both (he being divorced many years and my mother a widow with seven children when they married), and mom was well into her 40s, my siblings thought their mother had died giving birth only to find out he was crying because they had a little girl!

I only had him around for ten years but I learned a lot from him. Not so much in formal learning but the kind that is absorbed by small children, those lessons we pick up when the older folks don't know children are looking and listening. I've been called a kind person, that's definitely from Dad. I love flowers, gardens, creeks, and small creatures of the woods...definitely from Dad...although I prefer to admire the small creatures from a distance rather than having them for dinner. :)

I never had a chance to say goodbye but I've prayed for years that in the hours Dad knew he was dying, he remembered the Gospel and made peace with his Creator. How I would love to know that the tall, gentle man with the hands calloused from "building things" would be there waiting for his girl. I'm certain God will let there be plenty of ditch lilies in Heaven.

Posted by Brenda@CoffeeTeaBooks at 12:43 PM

What special memories with your dad. I'm sorry he had to leave you at such a young age - that must have been very hard. I can't imagine it. I miss my dad, too.

I cried reading this. My father passed away 22 years ago. He grew up on a farm, only went to school till the 3rd grade. But like your dad, he knew many more things than what could be learned in school. I miss him very much, he was 20 years older than my mom when they married, he was 44, she was 24, I was lucky to have him for 36 years till he passed. Thinking of you today...

How precious! I spent a lot of time with my Dad in my younger years -- first on a farm until I was 6 or 7 and then in the car with him as he had a job where he traveled the county and visited farmers. I often went with him to "help" with the paperwork -- we made a good team. And the ditch lilies were glorious on all those back country roads. Sweet memories.

And may God grant you that last heart wish, Brenda.

This was just beautiful, and it was so nice of you to share your precious memories.

Such a beautiful memory of your daddy, and I think we'll be surprised in Heaven about people we knew in our lives. The Bible says that God is love and that we know and understand what love is because of Him. That makes me think that your daddy- who fully understood kindness and love, and so loved his little girl- also knew the love of God in his own life. Around here, we call the ditch lilies "Tiger Lilies", and I marvel every year at their extravagant beauty. Thanks for sharing these beautiful memories of your daddy!

I remember this post, and I always think of you and your dad when I see them here in Pennsylvania! They are growing now and so you are thought of a lot these days!

I too, pray that he made things right with God, and is waiting for his girl! What joy!

This was just lovely! Thank you for sharing it.

What a lovely, lovely tribute to your Dad. Thank you for sharing.

Memories like this are the gathering of roses in winter. What a vivid memory of your Dad!
I also grew up calling them ditch lilies. Mom said that they came from falling off the trucks as they drove down the road. They also had what they called wild asparagus growing in the ditches from falling off the trucks.
Not sure about how much product arrived at the point of drop off it this much fell off. I do know lilies spread.