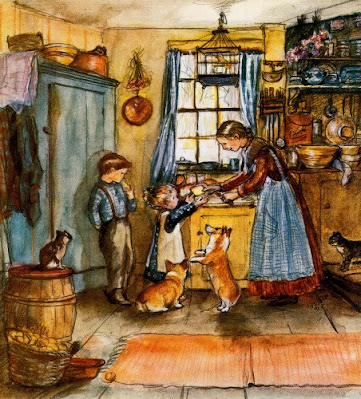 A long time ago, I read an article by Emilie Barnes in the lovely (and alas, no longer published) Virtue magazine.  Her column always provided good information and that particular month, she was talking about little obstacles that get in the way of our being more efficient.

For instance, she wrote that she used to spend too much time looking for a pen or a pair of scissors when they were needed.  Finally one day, she realized that situation could easily be solved by purchasing a package of pens and a couple pairs of scissors to put in various rooms in the house.

The point she was making in the article was that we often have something very small blocking the way of our getting things accomplished without realizing it.  She started looking at other areas where this was happening and as with the pens and scissors, found it didn't take much to remove those obstacles.

It was that article that I thought of last week when I went to the garage to do my laundry and noticed the bag of flour which had been sitting on the dryer since I took it out of the deep freeze... a few weeks ago.

What was the delay?  I absolutely hated getting out the Rubbermaid style container that held the extra bags of flour because of where it was located.  Next to it was the container that held a few bags of white rice, the one with the lid that really didn't fit it so it hurt my fingers to open it.

Well, the more I looked at that bag of flour, I knew something had to be done and what started with throwing laundry in the dryer became what I call a "When You Give a Mouse a Cookie" sort of day... one thing led to another.

Right then, I pulled the container holding the white rice out of the bottom shelf where it was located and with some effort, got it open.  I realized that container was not working and come to think of it, why am I giving prime real estate to the white rice when it is one of my few emergency-only foods?  Hmmmm...

So, I pulled the container next to it out, that which holds the extra flour, put the five pound bag of flour that had been on the dryer in it, and put that container where the rice used to be.

Since that was at the end of the shelving, it made it very easy to pull the container out to the garage floor (bags of flour are not light) and either take out or add a bag of flour with the oldest dates in the front of the container and the newest bags in the back.

Come to think of it, why was I putting the rice in such a huge container when I didn't plan to purchase large amounts?  So, I found a smaller Rubbermaid style container that was not being used and transferred the rice to it, putting it in a back spot on the shelf that was out of sight and out of mind until needed.

What Emilie inspired me to look for all those years ago was why things were not being accomplished as they should. In this case, why wasn't the flour put in its' safe place immediately.

After I made these changes, which didn't take all that long, I thought of how long this has been an issue for me and how easily it was fixed.  I've started looking at other areas in my pantry shelves to see what can be more efficiently stocked.  This is especially important if you are like me and have limited space.

After years of trying to use that lid that really doesn't fit anything we use these days, it went in the trash container.  It was cracked, anyway.  We will find a use for the container that now has no lid.

I've used Emilie's advice in other areas of life.  For instance, when I have a stack of books waiting to be read.  I have found that I have (had) a bad habit of trying to finish a book that wasn't really working for me and since I wasn't excited about it, I wouldn't pick it up to read very often.

By doing so, that was like a dam holding back the other books I really wanted to read.  So, one day I finally got smart and decided if I didn't want to keep reading a book after a certain number of chapters, then it would be set aside and it either went back to the library, back on my shelves for another attempt of reading at a later time, or it was donated to a friend or the library sales.

This is different than just procrastinating, which I'm pretty good at, too.  I have in front of me right now the phone number for a podiatrist I'm suppose to make an appointment with.  I don't want to go to another doctor!  But I must!  I digress!

No, when we have an obstacle standing in the way of something we really want to do... we need to look to see if something needs to be removed or changed.  Maybe it is only the need to purchase another set of shelves, or purchase a pair of slacks in a color many of our unused blouses will compliment, or finally to mend that favorite pullover.  All of which have been past obstacles for me.

I hope my last minute solution to a long standing and annoying situation will inspire you, too!  Now when King Arthur flour goes on sale again, I will not think twice about purchasing a couple bags.

Speaking of flour, there are no limits on it right now but I have seen limits on other items off and on.  Last week there was a limit of two packages of various kinds of sugar.  Jars of yeast sell out quickly.  My husband asked our health food store to special order Vietnamese Cinnamon for me since I haven't been able to find it on the shelves at any store for a few months.

I do have plenty of regular cinnamon but I love using Vietnamese Cinnamon for baking where I want the taste to be pronounced, such as with cinnamon rolls.  The availability of other spices have been off and on.

If there is one thing that the COVID shortages taught me, it was how very blessed we have been to live in parts of the world where we could walk into a store and have such a variety of food and other items available when we needed them.

Note:  Just a quick mention that the recipe I shared last week was a big hit at our Easter dinner.  It is proof a recipe doesn't have to be complicated to be quite yummy.  Of course, it was letting it sit for the twenty-four hours in the refrigerator before serving that brought the flavors together.  Yum....

If You Give a Mouse a Cookie (a very favorite children's book)... here.

Disclaimer:  Most links to Amazon.com are Associate links.  I receive a teeny tiny percentage of what is ordered when you enter your Amazon shopping through a link or the widget and it cost neither of us anything.

Image:  I think it is a Tasha Tudor illustration but no name was provided.

Posted by Brenda@CoffeeTeaBooks at 3:33 PM

We're pretty well stocked up here in Grand Rapids....except a noticeable shortage of wet cat food. My mother just got a coupon from Chewy.com so I placed a 3 month order...$15 off plus free shipping and auto renewal was another 30% on this order.

I keep dry cat food and bread flour in 5 gallon pails in the kitchen. Ugly by efficient lol. You might try finding one of these the next time you are at Walmart

LOL. If You Give a Mouse a Cookie, was one of our favourites when the kids were small. Guess everyone has days like that sometimes.

Aren't you afraid that mice or ants will get into any food that is kept in the garage?

I was thinking about this kind of thing today. Which may lead to a rearrangement of some of my kitchen cabinets.

I’m glad you’re still posting these helpful ideas and topics. Sometimes we just need a spark of an idea and it makes a big difference in our lives!

The lovely illustration in fact is one of Tasha Tudor's.
Love and blessings from a long time follower, first time commenting, from The Netherlands,