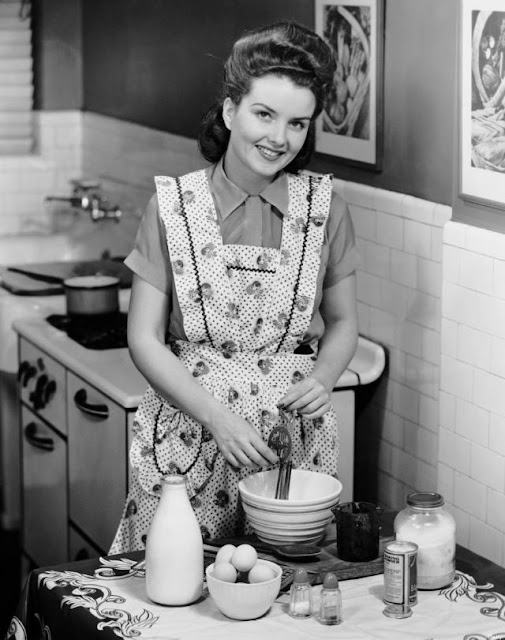 I  know I have mentioned that I don't care for prepper videos on YouTube that only talk about what they purchase all the time.  However, I think the Saturday after my stock-up day each month, it is helpful to write about how I am either stocking and/or topping off my pantry each month.  So bear with me!  ;)

The March stock-up day crept up on me since February is a short month.  It tends to come around faster than I think a month would pass, anyway.  Fortunately, I'd been keeping a list on the refrigerator as I would think of an item I'd need to purchase.  (I already started the list for April when I noticed how low the orange extract bottle has become.)

Between the past grocery lists I keep in an envelope and the list from the side of the refrigerator, it didn't take long to make out the stock-up grocery list for March.  I shopped Meijer and Aldi one day and Kroger another day.  My husband does most of the Kroger shopping but there are a few items I like to choose myself, especially in the produce section.

This way of shopping helps me to budget easier since I know right away in the month how much the bulk of my grocery budget was spent already.  I then know how much I can set aside for shorter stops at the grocery store during the rest of the month.  I also know if I can keep back part of the grocery budget for those items that were unavailable at any of the three stores so I can check for them later.

This month I set aside more of my grocery budget than usual since I only purchased items I needed to fill in for what I had used during the month as far as canned goods, etc.  I need to take stock of what canned goods I have on hand and decide what items need to have more purchased to deepen the pantry and what items I haven't used as often as I thought I would.

I also take note of what has been difficult to purchase that I need to consider keeping more of on hand than usual.  For instance, I've noticed the yeast that I use has not been on the shelf for awhile so I need to check for it when I'm in the stores during the month.  Before the COVID shortages, I would have thought one backup jar was all I needed but now I know that it would be wise to have at least two backup jars.

I'm also making an effort now to take note of the smallest of non-food items we need and if they are inexpensive, to purchase them right away.  Last month, I remembered to put a new nail file on my grocery list (since they sell them at Meijer). I kept forgetting I needed a new one until I went to use it!  Thus, it went on the list (finally).  For some reason, these kinds of items were hard to get during the shut down.

This month, I purchased another pair of kitchen scissors when I saw a recommendation for a particular brand on Amazon that were not expensive.  I have had two pairs of kitchen scissors for a long time but the older pair finally stopped working last Spring.

They get used a lot in the kitchen (like for cutting up whole chickens) and sometimes for heavy duty office use. So, while I was reading the article, I went to Amazon and put the KitchenAid scissors on my Wish List for when my credit arrived for February.  I prioritize any tools that make life easier since fatigue is ever present.

I used to purchase my favorite small freezer labels and my favorite canning jar labels (which are used for a lot more than canning jars) at my local kitchen/gourmet shop but it went out of business.  I checked Amazon for them when I needed to buy them again and I found the canning jar labels at the same inexpensive price as I had paid at the local store so I bought a few packages to have them on hand.

Since COVID, they have been available but they have now more than doubled in price.  So, it was good to have stocked up when I did.  However, I only purchased one box of the small freezer labels at that time and they went out of stock for months.  I kept them on my Wish List and when they finally were available again recently, I purchased one more box to have when the box I'm using runs out of labels.

It's an entire new way of looking at stocking up since COVID shortages began.  I don't know what it is like where you live but there are still huge shortages off and on with some items like herbs, spices, various extracts, cat food, allergy medicines, etc.

I did end up buying a couple spices on Amazon the past couple of months when they were not available locally.  It looks like I'm going to have to buy the Vietnamese Cinnamon on Amazon since I can't find it at any of the local stores, anymore. It is richer than the usual cinnamon I stock and perfect for some baked goods like cinnamon rolls.

So, what have I accomplished recently?  I made vegetable beef soup when I was able to purchase beef bones again.  We don't mind leftovers so we had that delicious soup for dinner a few evenings, after a quart had already been saved in the freezer.  I bought a second package of beef bones while they were in stock and put it in the deep freeze for a later time.

I had a bunch of bananas that were getting very ripe and they were turned into banana bread this morning.  The house smelled amazing and this recipe has never failed me.  It's a recipe I found in Feed Me I'm Yours when my daughter was a toddler and since it calls for four or five ripe bananas, I used all five bananas.

I had one small slice and it was delicious.  It's actually too glycemic for me so I will have to be careful at dinner.  The link to the recipe is below.  I've tried other recipes a couple times but always came back to this one.

So, my pantry "To Do List" this week will be checking the canned goods on the pantry shelves.  Last week, I organized all the canned goods and other items on the shelves I use most often in the kitchen.  They tend to get all mixed up over time and it is much easier to see what I have on hand when they are organized.

Disclosure:  Most links to Amazon.com are Associate links.

Image:  (No artist or illustrator name was available.)

Posted by Brenda@CoffeeTeaBooks at 3:29 PM

Those are good thoughts about stocking up thinking about things that have been harder to get during covid.

I'll try it again... my comment didn't go thru. Anyway, I was suggesting the Dollar Stores for things like labels. The amount in a package is smaller, but in a pinch it could save the day.

Have a good day!
Lydia