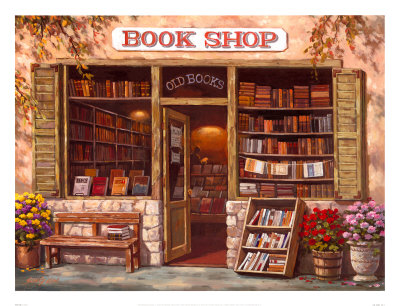 I thought July 1st would be a good time to give you a snapshot of my recent reading, listening, and watching.  We have been in a midst of a high humidity heat wave and staying inside most of the time has been a welcome relief!  I only walk in the yard to water the plants (before the recent monsoon), feed Mouse, and walk out to get the mail.

My reading is different now than it was before the sudden problems with my right eye caused first by an allergic reaction to the medicine injected into my eyes and then a severe infection in my right eye two years ago this week.  The surgery I had late last year helped me see overall much better but it is still difficult to focus in that eye so I have to limit my hold-in-your-hands book reading.

For that reason, I use my Kindle a lot more since I can increase the font and I made the decision to join Audible last Fall.  I told my husband that I'd like to subscribe for a year to develop an audio library of various kinds of books and he agreed it could be squeezed into the budget.

My criteria for using the monthly Audible credit is that it must be a book I'd be interested in reading, anyway, and I use credit mostly for those audio books that are kind of pricey.  Since one Audible credit usually can be spent on books of any price.  I have added inexpensive on sale audio books from time to time but I don't use Audible credit for them. 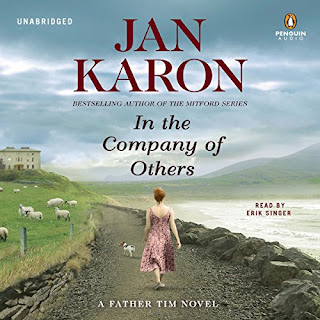 I mentioned that I have been listening to Jan Karon's In the Company of Others after the audio version came highly recommended by numerous people.  I agree!

I love listening to the Irish brogue instead of trying to read it.  I also like the Celtic music that plays briefly at the end of each chapter.  I knew the story line already since I started reading it years ago but it comes to life in the audio book.

Some people have complained that it is a long book and the story line can be hard to follow.  That is true compared to most Mitford books but if you begin reading or listening realizing it is a little deeper than the others, it won't surprise you.  I read that this is one of Jan Karon's favorites of the series. 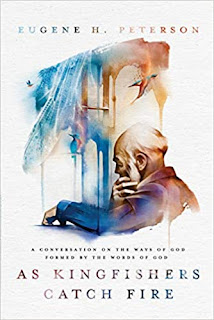 I always have a couple Kindle books going but the one I'm going back to often is As Kingfishers Catch Fire by Eugene Peterson.  I reviewed this book when it first came out and loved it but I could only get half way through before the review was due because of the smallish font in the Advanced Reader's Copy.

This was Peterson's last book before he passed away and the sermons in it were collected by a friend of his.  Peterson thought his friend and colleague would be more objective than he could be.

He did an excellent job of choosing different sermons given by Peterson throughout his very long career as a pastor... and if you think these would be boring, think again!  Each chapter is like listening to a master teacher and story teller, which he was.

As Kingfishers Catch Fire is my "slow re-read", something I learned about by watching Russell Moore's Reading in Exile videos on Facebook Live.  I thoroughly enjoyed watching them and had to catch up since they had been going a couple months before I found out about them.  They are purposely short, about seven or eight minutes each to make them easy to watch.

In his video where he answers the question of how he chooses what to read (I think that's the one), he said he is always re-reading one of his favorite books very slowly.  He's always surprised how much more he gets out of it and doesn't get concerned if he can only read a few pages at a time.  There is no time limit on finishing these books.

I loved that idea and there is so much in each chapter of this book that I thought it a good choice for my first "slow re-read".  Usually when I read a book again, I actually read faster than the first reading.  This is a new experience that I'm appreciating.  No pressure! 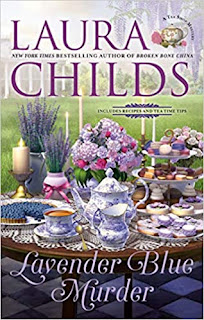 Both of these books were gifts from my daughter.  Laura Child's Lavender Blue Murder was in a box from Amazon during the shutdown with Paris tea, a box of low carb cookies, a throw, and other goodies.  At the time, I was in the middle of another book so I thought it would be a good summer read.  I was right!

Yes, it does follow the usual formula of her Tea Shop Mysteries but it is very enjoyable.  I'm glad I set it aside for hot weather reading.  One could call it a beach read if I actually went to a beach these days.  Stephanie took Homer with her to read at the beach.  Crazy but she is preparing for the upcoming school year. 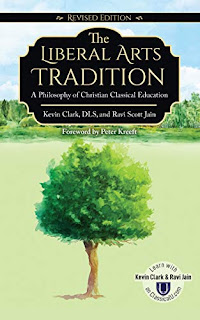 Speaking of which, the second book is an early birthday gift she sent me after messaging the most amazing excerpts as she read.  It is called The Liberal Arts Tradition: A Philosophy of Christian Classical Education.  While I do not need to read it closely as one who still homeschools does, I enjoy reading it a little at a time.  Not my slow re-read but my slow first time read!  Even one who mainly used the Charlotte Mason method of education can get a lot of enjoyable reading from this book.

I'm linking below to the Kindle version on Amazon because it is reasonably priced.  The hardback and paperback versions are third party and very expensive.  Stephanie bought it through a website that sells Classical Connections type material. 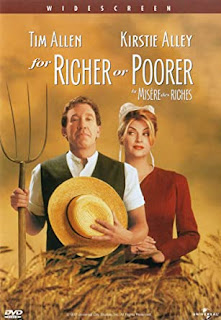 We recently watched For Richer or Poorer again for a good laugh.  It stars Tim Allen and Kirstie Alley and is one of our family favorites.  There is some bad language in the beginning but part of what makes this film special is how both characters change while living with an Amish family (because they are on the run from the IRS). 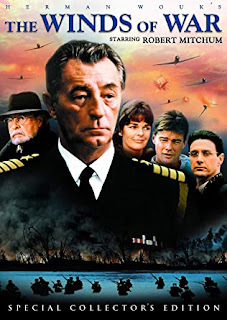 I have The Winds of War waiting to be popped in the DVD player soon.  It was a favorite book and I loved the mini-series that was made for television.  It is still reasonably priced.  I didn't care as much for the way they made the sequel, mainly due to a change in casting.  Most other people agreed.  Since it was made for television before a lot of bad language and other stuff was allowed, I don't recall it having anything really objectionable.  There are relationship issues but that is real life. 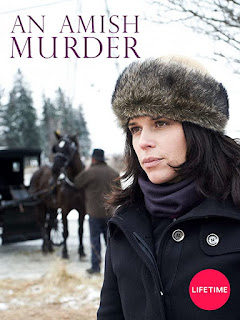 On Amazon video, I watched An Amish Murder (on the tablet).  It was a made for television movie I had seen before so it is pretty tame, too.  No grizzly close up of murdered people was shown and there is a suggestion that two people spent the night together but that is all there is.  This was a favorite TV movie.  The plot slowly builds and it has a happy ending, which I need these days. 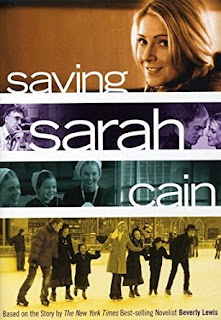 Saving Sarah Cain was shown on TV recently but I also have the DVD. It was one of the movies I knew I wanted in my own movie collection at home.  It was an after school special based on the book The Redemption of Sarah Cain by Beverly Lewis.  Produced by Michael Landon, Jr., it is a wonderful story and while not "Christian" as is the book, it shows Christianity in a very positive light.

These are all the highlights.  Except I am slowly reading through the Book of Acts in the Bible, which I began on Pentecost, along with as always the Book of Psalms.  Probably too slowly!

Mentioned in this Blog Post
In the Company of Others audiobook... here.
As Kingfishers Fly... here.
Lavender Blue Murder... here.
The Liberal Arts Tradition (Kindle)... here.

Disclaimer:  Most links to Amazon.com are Associate links
Image:  Book Shop, Sung Kim
Posted by Brenda@CoffeeTeaBooks at 11:23 AM

I always enjoy your book and movie/TV recommendations. My policy with Audible is the same: I try to save my credits for the more expensive books. I wish they'd introduce half-credits. It's so odd that a 30-hour audiobook and a five-hour audiobook would both use one credit.

Are you familiar with Libravox? It's an online collection of audiobooks for free. The readers are *just* volunteer readers, for the most part. They don't usually do accents or even inflections. And because it's free, they play a short ad every few chapters. Though I prefer Audible, Libravox has some titles Audible doesn't have. I'll also listen to a shorter book there rather than using an Audible credit.

I love Jan Karon's novels, in print and audiobook. I have read but not listened to that particular one. Hearing the Irish accents would have enhanced the enjoyment of that story. I think this and the other non-Mitford one are the only ones I haven't read more than once (plus the newer Dooley ones). Maybe I should try the audiobook of this one.

I had not heard of Russell Moore's reading videos. I will have to look them up!

I loved The Winds of War when it first came on, and read the book some time after.

Oh you make me want to read and watch all these things that you are reading and watching. I am reading nothing but blogs for fun. I am in the middle of Jeremiah for Bible reading. 😳 My goal is to make it through to Revelation by December 31st. I really liked Audible, but I got worried about how much I might spend so canceled, but not before I listened to two novels by Andy Andrews. I think I would enjoy listening to Karon's book. I remember reading it and liking it, but it was not a favorite.

A blessed 4th of July to you!

A great selection - thank you for sharing. I adore the Bookshop picture inserted too. I have this picture to do in cross stitch.

I love learning about new books to read! Thank you for the recommendations.

Thanks for your recommendations--I will have to find some of them. I ordered Hope's Table that you mentioned a few days ago, and I really like it. Tonight we're having her pork loin and the butterbeans (lima beans) from her book. (Along with a baked potato.) I'm so glad you are able to keep reading in one form or another. It is such a great pleasure!

I recently started listening to In The Company If Others, too. I’m enjoying it. I also enjoyed that Laura Child’s book on Audible during the peak of the virus and lockdown. It was an enjoyable escape!

We’ve enjoyed that Tim Allen movie several times, I've never watched The Winds Of War, The Redemption of Sarah Cain was enjoyable but the book was better! (Grin)