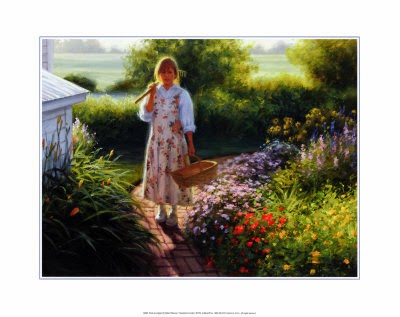 I don't recall what the subject of the conversation was but recently my husband looked over at me and said, "You still have a lot of hippie in you!".  I was a part of the Jesus Movement and not a hippie but I took that as a compliment.  I'm also pleased there is some of the innocence of youth within even if it is deeply buried at times.

Actually, we all have it you know... those echoes of Eden.

There are men and women whose echoes of Eden are at the surface and the very reason they live.  These are the poets and the artists, the songwriters and saints, the mountain climbers and the gardeners, the farmers who plant seeds expecting a harvest, and the men who are drawn to sea as their grandfathers before them.

I am certain Handel heard it and made it possible for me to catch the echo as I listen to the Hallelujah Chorus.  Bach sensed the echo and praised God with his music.  Michelangelo sensed it as he chipped away the marble to release the statue of David.  I am certain Elizabeth Goudge had to hear the echoes of Eden as her imagination presented Henrietta in A City of Bells.  Most certainly did Beatrix Potter and her animated animals.

But so does the woman who lives in the house close to campus with the wildflowers growing in her yard, and the farmer at the market on Saturday mornings in summer who waxes poetic about the heirloom tomatoes, and the woman who collects the honey from her bees as beekeepers have done for millinea.

If one truly has their ear to the ground, so to speak... longing for the echo of Eden within their soul... then we can understand why the animals we love become members of our immediate family.  I think it is even the reason behind our joy as we prepare a meal for those we love and take freshly baked bread to meet the new neighbor.

What are the echoes of Eden?  I believe there are a few which, if we are fortunate, stay with us in life.  First is that sense we experience from time to time, usually for no more than a few seconds, that which comes to us as a fleeting memory of an experience, a feeling perhaps of... bliss.

We try to recapture the feeling and recall the memory but it lays below the surface of our understanding.  I have felt this off an on throughout life and I think perhaps... not able to quote chapter and verse here but only a ponder... that within all of us there is a sense of what God intended before the fall of man.

Why?  Because if the Holy Spirit truly lives within us as the Word testifies, then He remembers.  He was there when the morning stars sang and when the earth was void and when Eden was planted.  He was there when God took of the dust of the earth and made the first of those created in His image and breathed His very DNA into the lifeless form to give him Life.

Bliss... Perfection.... Contentment... all that is Beautiful and Lovely.  Eden.  The world may scoff and tease that those of us who are people of the Book believe such nonsense.  But deep in the very depths of our DNA, we have this faint memory of it all even if we cannot put it into words.

There is another echo of Eden that even those who do not accept Him as God experience.  Perhaps a universal echo of which permeates all of Creation, just as the rocks and the trees and the very earth itself cry out for the day all will be brought back to perfection.

That echo is the one which calls us to stop and gaze at sunsets and brings the Psalms to mind as we thank Him for the sun rising in the Eastern sky.  It is why I stop washing dishes on a winter's evening to look at the full moon behind the treeline through the kitchen window over the sink.

This echo explains my deep love of forests and creeks and cornstalks as they dry in the autumn sun.  I even feel it vicariously as I will stop what I'm doing to watch another human climb a mountain on TV, or walk the hills of Scotland, or take us through the gardens of England in full bloom.

It is why I love to follow the walking trail with John Denver or Indelible Grace on the itty bitty iPod.  I think it is why I love to go without shoes but my husband believes that is because my mother's people are from Kentucky.

If one is to view the favorite links on the sidebar, there are those which takes me to the blogs of friends and others who are Christ followers.  But mingled among them are links of like-minded individuals, not followers of Christ but those people who definitely sense the echoes of Eden.

Perhaps it is the way they raise sheep and turn wool into lovely knitted creations, or they have followed my dream of living off the land, or perhaps they grow their own food and preserve it, or simply understand and explain the echos in such a way as to warm my heart.  Even if they do not yet comprehend there is an Author of the echoes.

I think it is something like is written in verse 20 of the first chapter of the book of Romans.


"For since the creation of the world God’s invisible qualities—his eternal power and divine nature—have been clearly seen, being understood from what has been made, so that people are without excuse."

It amazes me that one can hold their newborn child and not know that echo.  Or feel it each spring as life begins to return even after the longest of winters.  I certainly sense Eden when I celebrate the Resurrection.

Is the echo what the birds hear as they return each year to the same backyard?  I don't know but that is a possibility for one who believes there is such a memory of Eden within us all.  Perhaps that is why all nature is waiting for the redemption of the earth.

Which is why I'm happy one who knows me very well can still see that which he calls a hippie... and I prefer to think of it as one who still hears the echo of Eden.

Picture:  Grandma's Garden by Robert Duncan
Posted by Brenda@CoffeeTeaBooks at 11:33 AM

Beautiful! A true glimpse of Eden's wonder and innocence!

Lovely ... that you can put down on paper what my soul feels. I sit every morning in a comfy chair in the corner of my bedroom with the open window ushering in all the sounds of nature (and the neighbors) awakening to enjoy my cup of tea and a quiet time with my Lord. Often I have those fleeting moments of something joyous beneath the surface of my mind and I can never grasp it totally but savor its being there. And I treasure it as a blessing.

We all need more paying attention to Eden.

This was So Beautifully written! I can so relate! I feel most peaceful when I'm close to nature. (Like now. I'm sitting out on my deck watching the birds and the squirrels running up and down the trees in our backyard!) We are enjoying a beautiful Spring morning, after a brief freeze last night! I just bought a flat of pansies to plant, but they survived. Thank goodness they're hardy! Love those sweet little pansy faces!
Thank-you, Brenda, for sharing this....it refreshed my spirit.
Blessings,
Laura C. from WA

Another lovely and beautifully written "sunday tea"! I agree with Ann, who wrote that you put down on paper what my soul feels. I thank God for people who can do that...write what I feel so deeply but am unable to express. You are one of those, Miss Brenda. So nice to read this and let it remind me to take the time to look for Eden and God's hand in ALL of nature.

You've rendered me speechless once again! What a gift you have, Brenda. Blessings, Bess

Ahhhhh...so beautifully shared...I imagine that you were a beautiful hippie. You sure are a sweet spirit.

I think it's a great grace of God that we have these glimpses of Eden to cheer us on, and to feed eternal hope in the midst of life.
I love your idea that the reason we have glimpses of Eden is because the Holy Spirit within us brings to mind the first act of creation and the eternal communion of the Trinity which He has experienced in eternity past - it is a new thought to me and one to ponder.
Thanks as always.

Brenda - My heart leaped with every word! Definitely "sharing" this one - I so identify with the person you've described here and know intimately of whom you write. Thank you for a word of affirmation when so often I feel the finger of accusation - from the enemy - he who would have me forget that I am a daughter of the King created to live blissfully and creatively in His Garden . . .
Joy!
Kathy

This post so warmed my heart. Thank you for sharing your thoughts of Eden. I couldn't agree more!

Brenda, reading this I saw myself. And finally had to stop and thank Father God for a kindred spirit and the assurance of being this way. I long for and look for like minded ladies in my daily life and while there are few in my real life, I am blessed to find them in my blog world. Thank you for sharing and putting to words what so many if us feel. It's nice to have a name for this feeling/longing.