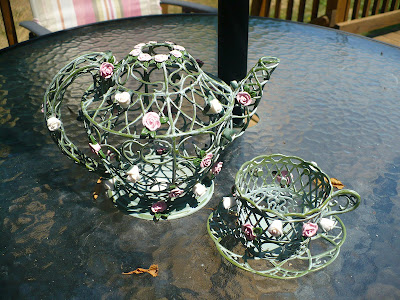 I'm still under the weather due to these antibiotics.  Well, to be honest... I am miserable.  But that usually means they are working to rid the body of the dreaded infections.

My long time friend, Sheila, brought veggie lasagna and soup (and chocolate chip cookies) over for our dinner yesterday.  There is a reason we've been friends since our boys were little... even if her family does work for Obama's campaign.  :)

Fortunately, I'd started today's post before I was given the antibiotics so here's Part 1, which means Part 2 will conclude next week... God willing and the creek don't rise... and I survive the medicine given to make me well.

Recently I sat in front of the library watching people.  I must say, that was not my original intent for I was there to meet my husband.  Not knowing when he would arrive exactly... I had brought a book to peruse hoping the time would pass quickly.

However, the book could not compete with the people walking by... especially as one or two or a group would stop and ask directions.  I hope the guy I told to keep cutting through parking lots found the building he needed.  "You can't miss it", I promised. At least you can't if you stay on the correct parking lots.

I texted my daughter at one point, telling her the campus was full of freshmen and their parents looking completely bewildered and lost.  It can be difficult finding their way around a college the size of a city with over 60,000 students... not including thousands of staff.  No wonder they have the deer in the headlight look.

Memories surfaced of my own first days on campus and how I thought I'd never find my way around.  I was thinking of the changes that had taken place in the years since I was a student.  The world is a completely different place, one I could not have imagined in a million years.

For one thing, at that time Russia and the United States were still involved in the Cold War and would be for many more years.  Russian children and American children both grew up with a mushroom shaped cloud hanging over their future.

I first realized how much world events had changed when our family was attending my son-in-law's PhD graduation.  I was perusing the PhD graduates in the School of Science when I came across a graduate in Nuclear Engineering... from Russia!  Now, that would not have happened thirty years earlier.  :)

When I was eighteen, Nixon was just opening U. S. relations with Communist China... a place most American youth knew nothing about.   My son has told me in his building and those surrounding him at Married Student Courts, all but one other family were from China.

When my husband started classes at the University, there was a dress code.  Now one walks through campus on a summer day and most of the women are wearing very little.  Most college coeds can out drink, out swear, and live in immorality more than the men would have considered when I was in school.

Hubby loves to tell new students that he paid for his tuition the first two years of college with money he earned as a paperboy in high school.   It now cost more for one semester (not including books) than his entire collegiate career.

Do you remember the famous book by Alvin Toffler called Future Shock?  His definition of Future Shock was "too much change in too short a period of time".  When his book came out in 1970-ish, I thought about the amount of change my mother had seen in her life as she went from riding in a horse drawn buggy to seeing a man walk on the moon.

I now know a little how she felt.

I heard Thomas Friedman speak on TV recently... I think it was on Book TV on C-Span, when he gave a statement I could hardly believe.  He told people to look up the Index in his bestselling book The World is Flat and look under the words beginning with "F".

Do you know what was not there in that recent book?  Facebook...

These are just a few instances of mind boggling change.  I have told my son that young people today have no idea how much this country has changed from its' Christian morals and traditions.

Families such as the one I grew up in who did not attend church had Christian boundaries and morals.  Even the TV shows we watched and many of the movies we saw still had Christian values and morality as their base.  I remember a TV show that was canceled because people complained about its' premise... a man and a woman living together who were not married (and this was the 70's!).

Just a couple nights ago I was watching Dragnet on one of the digital channels that shows old TV shows and was startled to hear Friday quoting Scripture!  Have you seen the Beverly Hillbillies rerun where they visit Petticoat Junction during the Holidays and Jeb is asked to "say grace" over dinner?  People didn't think twice about prayer and the Word being a part of everyday life.

So what can we do in the midst of a world turned upside down?

We can make certain that our homes be places of refuge from a fast changing world.    We do still have some control... some more than others... over our own little part of the world.

More ponderings on this subject next week, I need my pillow.
Posted by Brenda@CoffeeTeaBooks at 4:00 AM

It seems to me that stocking our pantries is "easy" compared to knowing where to begin making "certain that our homes be places of refuge from a fast changing world."

I hope your body & mind are soon clear and back to normal.... Myself, I've been waylayed by a case of poison ivy. My face particularly is swollen and itchy....

I have always thought that upperclassmen should volunteer to be a freshman's (and family's) guide for the first day at least. That brought back a memory so clear that it made my heart skip a beat. I remember it so well! See that's how well you explained what you were seeing.

Things have changed a great deal. I remember the first time I realized that things were slipping rapidly. It was over 25 years ago when the preppy look was so popular and everyone looked so neat and tidy. However, the things that came out of the mouth were anything but. A group of clean-cut, but vulgar, college boys were hanging out much too near me and my children at the beach. We had to pick up and move, though they could be heard up and down the shore. Now such language is as common as a hello.

The world has changed in many ways but in some ways, it's for the better.
As you said, we aren't living under threat of nuclear war now. (hopefully)
I notice a higher degree of acceptance in society nowadays than there used to be. For example, telling racist jokes is no longer considered acceptable.

There is a lot more acceptance and awareness of the needs of people with disabilities then there used to be. My husband uses a walker so we are grateful for the accessibility codes for new buildings.

Technology such as the internet has changed life for better or worse, but without it we wouldn't have immediate access to information we need or enjoy reading your blog.

Many prayers for endurance and healing are lifted for you, Brenda.

Great thoughts. May we all seek His face and understand how to make certain our homes are sanctuaries from the world.

In His Grace,
Michelle

I sure hope you start feeling better Fast! I agree things have turned upside down completely in so many ways. Actually I like reading the writings of people that remember as I do a different world.I sometimes wonder how many of us are left. Our children and especially theirs will not know there was a world like we grew up in. I have had many already tell me I am making things up. That I am only saying the good things and that most of life was as bad as it is now. Not so. Technology and new laws have in some instances helped mankind. Lowering the morals and language has not. Where is our moral compass now? What do people say is right and wrong? It seems anything goes. We cannot say everyone has changed as there still are people who care and have manners and such. It is just so sad that in one generation or so things again have so drastically changed and to me slid down hill. Sarah

I surely hope you are feeling improvement soon.I so much agree with your posting. Yet while this world is a changing, our Lord remains the same,yesterday, today and forever. His Word is settled in Heaven. So thankful for His promises,without Him, there is no hope. Blessings to you and thank you kindly for always sharing words of wisdom,sprinkled with so much practicality. Dawn E. Brown

All too true...I miss especially the great extended clan/family get togethers of my childhood. There is simply nothing that compares. And once they ended, there are no more, for us at least. Even my children all get together very rarely...years apart and there are only 3 of them. Their children will not know each other, to speak of. Relationships take time. Our culture somehow, with all its benefits of helpful machines, has somehow robbed us of that time together! In reading RVers blogs, it appears that maybe part of what those friends do, is kind of re-create a type of clan/family gathering again...many of them meet up during the year, here and there, sometimes large groups even. No wonder Hubby and I are considering that lifestyle now that he retired.

One of the end of days characteristics is a lack of normal type love...I think we see a great lot of that. We know a lot of other families who are much like ours. There is no wars going on between family members, just much distance, in every way. The KINGDOM has much to look forward to!! ALL problems FIXED!!