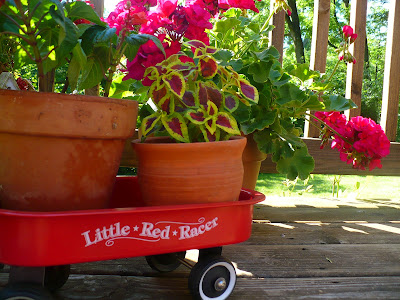 Last year I didn't purchase plants for the deck and I really missed them.  This year, with wedding events and all, we wanted to make certain the deck looked as nice as possible on a tight budget.

I had all the containers and "decorations" already.  The largest expenditure was $14.99 for the large geranium display (don't you just love that color?) to add instant impact.  Everything else was fairly inexpensive because I planted them myself.

This year (after learning my lesson the hard way), I made certain I punched holes into the bottom of the white "barrel" container in addition to placing a good layer of river pebbles in all other containers without drainage holes.

I have this coleus planted in various small containers on the deck and front porch.  I'm calling them my bonsai coleus because I'm pinching them off as they grow to keep them small.  :) 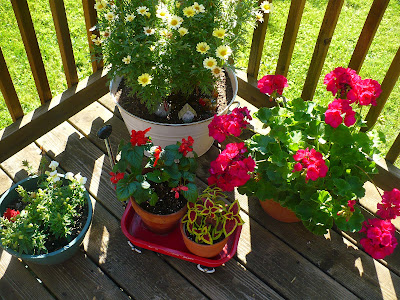 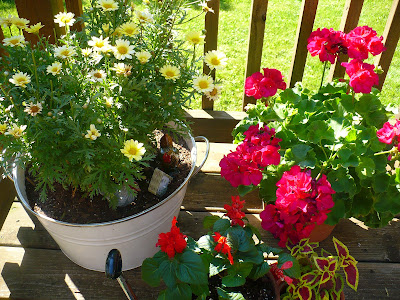 Because of the wedding, my husband let me put together an English Garden look without complaining... much.

I added a lot of red to attract hummingbirds, too... and because I love red and yellow together. 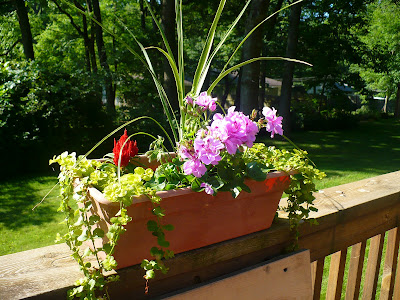 I couldn't resist the lavender hanging geraniums.  Eventually the red flowers will get really tall but in the meantime, the stars of the show are those lavender flowers.

The gorgeous vines cascading down the sides were on clearance because they were scraggly but I took a chance on them (for such a cheap price) and they perked up immediately! 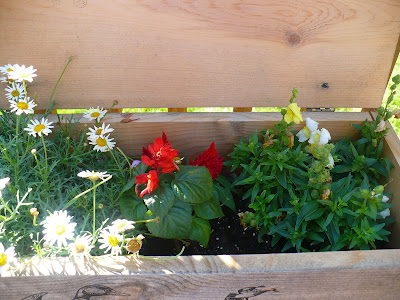 This is an English Garden in a box!  I will take a better picture when it grows taller but even now it looks pretty.  It sits just under the "window box" container with the lavender geraniums.

It was planted in a thrifted box I have kept on the porch for years and almost threw away.  I saw something similar in a garden magazine so I took the time to clean up the box and it turned out great (it was covered in spider webs and other gross stuff). 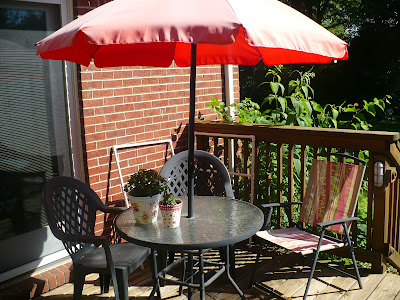 The temperatures were in the 90s during wedding week but the two small tables with umbrellas made it possible for people to comfortably enjoy a lunch together.

See those two flower pots on the small, round table? 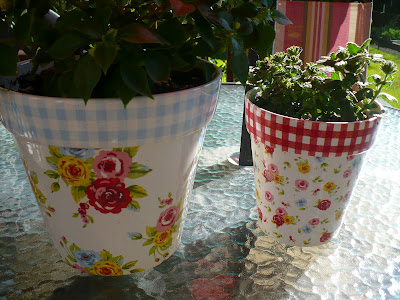 I found them on sale at Menard's, the last two on the shelf.  They will eventually make their way to "my" room.  As Stephanie told me, they are very good Cath Kidson type designs.

The inspiration may have been the wedding but we will enjoy the flowers all summer.
Posted by Brenda@CoffeeTeaBooks at 10:49 AM

Thanks for sharing your beautiful blooms!

Brenda your deck looks so lovely! Love the english garden in a box!

I have been looking for those planters for over a year! I saw them on someone's blog and she said she got them at TJX (a year ago).

I put my coleus pinchings in water and root them. More free plants!

Your deck is impressive! I love all the flowers. Due to some other projects -- mainly my husband removing all the grass and trying to plant new grass -- I have done NOTHING with my patio this year. You are showing me that I could have done a lot better. Thanks for the inspiration!

Love the look and the use of all the different containers. Especially like the garden in a box - what a great idea. May have to steal it ;0)

Brenda, it looks so very pretty. I shop the distressed plants at my garden center every year. That is how I am building my own perennial garden.

And your son's wedding has inspired me in how to help MY son's wedding later this summer. They are on such a limited budget and we can't help much financially. Her parents aren't willing to help much at all (don't get me going on that one). So I think we are taking a page from your son's wedding and having tea-sandwiches and desserts that my extended family will make.

Just lovely...I don't have a deck, but I'm waiting for some perennials to go on sale (as it's getting past planting time) for around my steps! :)

i keep looking for a "like" button for your posts, lol! hmm...wonder where i get that from? :)
joanna

The red geranium is beautiful - the color!

I agree with Stephanie about those last two pots...I thought the same thing when I saw the photo.

Do you know? It was your deck pics in a past post and your thoughts around the deck area that first drew me to your blog?

Of course, your love for God, family, deep-thinking, gardening, coffee, and tea drew me back again and again.