Christopher had two finals today.  He has been studying very hard for his Latin exam.  He's dyslexic so learning a foreign language is hard and he's the first student registered with the University as dyslexic who is taking Latin (he has a Classics minor) so he can't get around all the written exams... but he has a wonderfully understanding professor.  Each semester of Latin at the university is equivalent to two years in high school.

However, he thinks he did quite well with it and while it would be nice to get an A, he knows he will at least get a B in the class so it wouldn't bring down his GPA very much.  This is the guy who received an A+ in Engineering Physics (the same class which his father had to take twice in college) but learning a foreign language is hard.  He probably studied for that final about fifteen hours or more.

He studied for his Ancient Civilization final for about an hour and he knows he got an A in it.  He says all that watching of the History Channel while homeschooling helped.  :)

While I spent part of the day on campus, I did manage to read some of the lovely little paperback Goudge novel called Henrietta's House which my equally lovely friend sent to me.  She has shared precious Goudge and Stevenson books and was the first to introduce me to D. E. Stevenson (whom Lanier calls "Goudge light").  I especially enjoyed Vittoria Cottage and Music in the Hills but also Miss Buncle's Book and Miss Buncle Married and... well, I could go on.

I've decided I'm going to take some pictures of my bookshelves and show them once in awhile.  These two are bookshelves in Christopher's former room where I moved some of my very favorite books.  If you are as nosy as I am about photos of bookshelves... yes, the picture does enlarge when you click it.  ;) 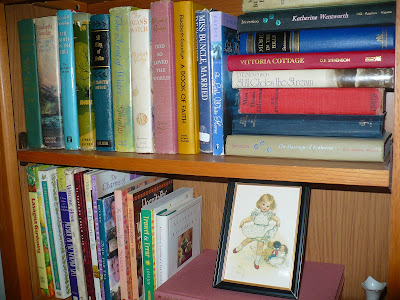 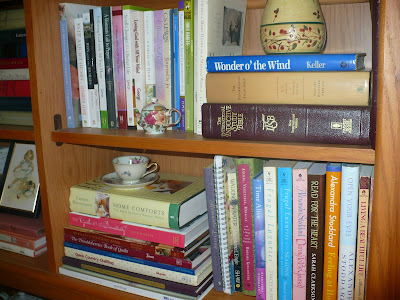 Now... to the brownies.  I had promised the guys I'd make "something sweet" today but there wasn't time for anything complicated.  I threw together this Beverly Nye brownie recipe and made a simple chocolate buttercream frosting to put on it (just a thin layer as this is her rich brownie recipe).

I will "park" this on my recipe blog soon.  I already have another Beverly Nye brownie recipe there.  It is her less expensive version of brownies called Cocoa Bars.  If you have a Beverly Nye cookbook, you will know this is the way she often wrote her recipes.  I used to watch her on The Bob Braun Show that came out of Cincinnati when I was a teenager and I loved her recipes even then!

(I have let the butter-cocoa mixture cool and then just added everything else to the saucepan!)

For the thin layer of frosting I used today...

Blend together in mixer until smooth.  Add milk about a tablespoon at a time until you get the fluffy consistency you want.  Be patient or you will add too much and then you have to add more sugar and then more cocoa and well, it can get to be a mess.
Posted by Brenda@CoffeeTeaBooks at 5:41 PM

I'm amazed at all that Christopher has been able to accomplish. He's an inspiration. I'll doff my cap to him for a "B" in Latin and I'll not be surprised if he earns an even higher grade.

I do like to snoop in somebody's bookshelves so thanks for the peek.

Christopher is one of those people who amaze me with their understanding of all technical stuff.
Good for him with his grades, he got a sound, strong foundation at home! Yea, you!

Your brownie recipe is nearly identical to mind but ours called for shortening, so we use coconut oil. They are very good!

Congratulations, Christopher, on another semester well done and toward your goal! Hooray!

I adore Beverly Nye, Brenda! She is so wonderful, warm, and witty. And her receipts are out of this world. My husband loves loves loves her meatloaf! It is what he wants for his birthday every year.


More books.... I have 21 days off between semesters. I am going to find some of these to read!

Have a wonderful week!

Caught! I always enlarge photos of bookshelves so I can see what other bloggers read, lol!

I haven't heard of Henrietta's House. My husband generously shared a portion of his work bonus check with me and said "Have fun." I see BOOKS in my near future!

Oh Latin. Three of my grandchildren attend a Christian school where Latin is required. My older granddaughter barely passed the course last spring. But she did and now she's learning Spanish, it's much easier for her. My next granddaughter is taking Latin this year and is flying through with all A's! I told them both having Creole as her first language is helping her in learning Latin. Oh the joys of learning and of children and grandchildren!

Thank you for this lovely post, I love looking at other peoples' bookshelves, and I am very envious of yours!

I have every book Miss Read has every written, as I have been collecting these from second-hand book shops for about fifteen years!

Oh Brenda, I just love that picture mixed in with your books. Reminds me so of my daughter (almost 24)- she always loved a "twirley skirt." Well I guess all little girls do. Well come to think of it, this little- girl- in- a- middle- aged- body still loves them too! Blessings, Angela Oh and isn't it wonderful how we are differently blessed!