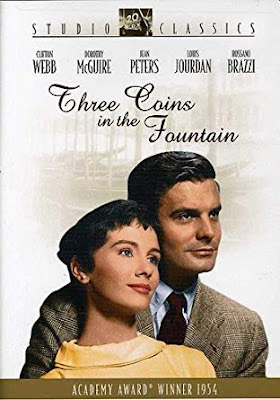 Today I'm making a bit of a switch and talking movies instead of books!

A couple of weeks ago, I decided to watch an old favorite movie called Three Coins in the Fountain.  It was made in 1954 and I was thinking while watching it that a movie like it could never be made again.  Society has changed too much, I'm sure young people don't have a clue to the plot line.

I thought this the most romantic movie ever made when I saw it as a teenager.  It is about three American women who share an apartment in Rome.  So much is different now, for one thing... Americans can no longer depend on the strength of the dollar to make living there cheap.  Bosses can no longer tell their staff who they may and may not date.

Although, visitors still throw pennies (or whatever else change they may have) in the Trevi Fountain and make a wish.  I know because my daughter did this very thing when her family visited Rome and made certain I knew about it.  She knows how much I love that movie.

So it got me to thinking... what other movies could not be made today because the cultural has changed so much.  I looked through the DVDs I own of older movies and came up with a few.  I love all these movies so I would recommend any of them with one caveat... these movies from the 60s were far more innocent than movies today but some have what I call... "wink wink" suggestive humor.

Here is a list of some of the other movies I own.  I would love to hear movies from the 50s, 60s, etc. that you think could not be made today. 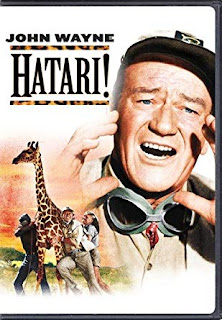 Hatari!
I thoroughly enjoy John Wayne movies, especially those that are not Westerns.  Hatari was filmed in what is now Tanzania and is about a group of men, one woman, and a female photographer who catch wild animals for zoos.

So right away you know that would not be politically correct today!  Not to mention that everyone in the film smokes like a chimney.  But this was the early 1960s when smoking was still considered tres chic.

If you like closely structured screen plays, this is not your movie.  Due to the nature of filming, some of the lines were made up as they went, especially in action scenes.  Also, the action scenes (which were very dangerous), were performed by the actors themselves.

But it is a fun romp through African scenery with lots of action and a couple very innocent love stories.  It would be SO different today.  It is a movie men will love as well as women. 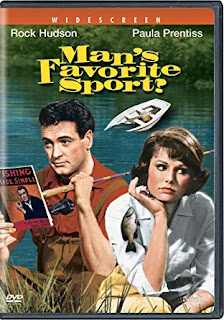 Man's Favorite Sport
When people asked for a list of my favorite movies in my 20s and 30s, this film would always be in the list.  It stars Rock Hudson and Paula Prentiss about a man who is sells fishing equipment and has written a best selling book about fishing... but it turns out has never really fished.

Everything he has written that has helped many people be successful fishermen, he took from what customers had told him through the years.  One day his world changes when Paul Prentiss has his boss, who is unaware he has never actually gone fishing, force him to take part in a fishing tournament.

This is a true romantic comedy and sometimes the conversation can be on the risque and suggestive side but otherwise, it has no scenes one would find today. This is another romantic comedy men can appreciate. 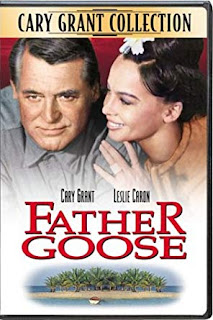 Father Goose
In this movie, Cary Grant plays a man who lives alone on an island with his booze and no responsibilities until he is drafted into service (of sorts) by the Allies in WWII to watch for enemy ships and planes.

In a series of plot twists, he ends up saving a very prim young teacher (played by the lovely Leslie Caron) and her female students and has to take them back to his island until they can be rescued.  All kinds of adventures occur before they can be rescued and in true 1960s romance scripts... the quite older Grant and the young Caron fall in love.

This is the kind of comedy that showed movie goers Cary Grant could be slapstick funny at times.  This movie couldn't be made today for many reasons.  I think it is too far past WWII for some people to even get the plot.  People are too world wise to think Caron could cure his drinking in just weeks.  Most movie makers now would make the relationship far less innocent than it was in the early 1960s. 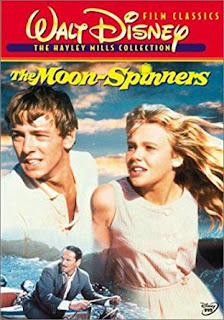 The Moon Spinners
This is one of the adventure movies Haley Mills made as a teenager.  She plays a very young woman who travels to Crete with her aunt.  There she finds romance, danger, and international intrigue.

This was a big change from earlier Haley Mills movies and I remember watching it in the theater thinking it was amazing.  The script still keeps me interested throughout and the scenery is beautiful.

This movie could be made today but it would have a completely different look and feel to it.  Which would make me sad because it is the innocence of the Haley Mills character amidst the international intrigue that makes it such a good movie.

I enjoyed most of Haley Mills movies back then.  Disney did a good job of giving her roles to play as she grew out of the childhood stories, knowing many of her fans would be getting a little older at the same time (like me!).

If you have any suggestions of good movies from the 1950s and 1960s, I would love to hear them in Comments.  They don't have to be romantic comedies.

Disclaimer:  Most links to Amazon.com are Associate links.
Posted by Brenda@CoffeeTeaBooks at 3:32 PM

I had heard of Three Coins in a Fountain, but I have never seen it. I'm going to put it on my movies-to-look-up list!

I had not heard of the others, but Father Goose in particular looks good.

One of my favorite old movies is Penny Serenade with Cary Grant and Irene Dunne. He meets her in a record store, where, in that time, you could have someone play selections from a record for you. So he grabs a whole stack and asks her to play them. I don't know how they'd redo that scene today, with digital music. But then different songs from that era intersperse the different stages of the couple's life. They fall in love, marry, face tragedy, but he's still immature. They adopt a little girl, and in the process he grows up a lot. The whole adoption situation would probably be different today, too. One of my favorite scenes is when Irene has to give the baby a bath for the first time, with her husband and all his coworkers (they have printing press in the house) looking on. She confesses that she doesn't know what to do, and she's scared and nervous. Then one of the men, who had been a farm boy, I think, takes over. The scene sounds a little strange today, but it was cute and innocent then. Overall a very sweet movie.

How interesting to read your reviews. I only know one of these movies and we are not in agreement about liking it. So, jf I could find any cheap, I’d be intrigued. You have me really wanting to see four. The fifth...even though made in a very good year...😣

One of my favorite movies is Wait Until Dark where Audrey Hepburn plays a blind lady. It's very suspenseful!
Thanks for the movie reviews. I have put a couple in my Amazon cart.😊

" Heaven Knows, Mr. Allison", starring Robert Mitchum and Deborah Kerr, about a Marine and a nun stranded on an island in WW II. He falls in love with her but is very respectful always and accepts that she will not abandon her vocation for him. It is a delicate love story and also an adventure story, always in good taste -- very subtle and well done. Today the story would have been totally steamy and undoubtedly X-Rated. How sad.

How is it that we are of about the same age I think , and I have seen none of these , or any that your other comments have mentioned....although I am sure I saw Sound of Music and , 7 Brides for 7 Brothers at least 20 times each !!! LOL , no time for other movies when I was growing up I guess..

We love Father Goose! We often will say "my blood is too salty " 😂 I will have to check out the other ones. We love older movies. Some of our favorites are McClintock with John Wayne, Friendly Persuasion with Gary Cooper and Sgt York with Gary Cooper and The Major and the Minor (I can't remember who played in it) I am sure that they would either nix them or make them too racy!

I just thought of another one of our favorite ones Desk Set with Katherine Hepburn.

A movie I love is a little older (made in 1945) and based on a Noel Coward play. "Blithe Spirit" with Rex Harrison is entertaining, and I see that there is a remake in the works for 2020 starring Dan Stevens of Downton Abbey fame. Rex Harrison was wonderful in "My Fair Lady", as well.

Charade with Cary Grant and Audrey Hepburn, Backstreet with Susan Hayward, An Affair to Remember with Grant and Deborah Kerr, Doris Day's Pillow Talk, Any of the 'Tammy' movies with Sandra Dee or Debbie Reynolds, A Summer Place with Sandra Dee and Dorothy McQuire...I could go on and on and on, lol...Although I was born at the very end of the 1950's movies from the 30-50 era is my favorite and ditto for books written in those years hence my love of Goudge, Stevenson, Dorothy Evelyn Smith.