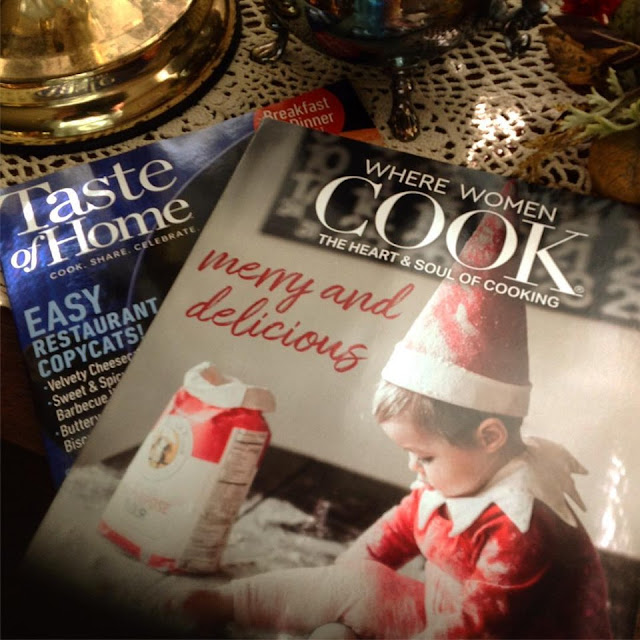 If you follow CTB&Me on Instagram, you will have seen this photo of two magazines I bought with cool weather cooking in mind.  I had already purchased items for a recipe from Taste of Home when circumstances changed my plans.  I was working in the Study earlier this week and heard what appeared to be the sound a waterfall under the floor.  Yikes!

I recognized that sound and had my husband immediately turn the water off coming into the house.  The only 1960s era pipe left in the house had cracked.  The house had been power washed earlier in the day so we are not sure if the old pipe could not handle the pressure (the end of the pipe was where the water spout is located outside) or if it was the big change in weather... or both.

Having gone through a few water emergencies now, I went into action and filled the sink with hot sudsy water, brought the two red plastic dishpans in from the garage shelves and filled them with hot water until the water stopped.  I also filled a pitcher with filtered water.

I must admit, there is something about experience because this water emergency was not as terrible as before.  Those few preparations made with the rest of the water in the pipeline and the water filter made all the difference.  Not that it was easy, one never realizes how much modern plumbing is a gift until they are without it.

The problem was fixed early Friday morning and we are now the proud owners of a brand new pipe and water spout and more importantly... running water. Sigh... this was our third big expenditure for the house in the last couple of months.  But every one of them was necessary for upkeep of the house and property.

You may remember that in my other recent water emergency... insert another sigh... I said what I was reminded of the most is just how much water we use.  One can never store enough water for a long term emergency.  This time, it was only for a few days, we had some stored water in the garage pantry, and we could fill a big bucket with water from our neighbor's house.

I was reminded that most of stored water we have in the garage pantry is for drinking.  Which is important but so much of the water used is for flushing toilets and other non-drinking needs.  I need to store more gallon size containers of plain old water.  I did have water stored from filling club soda water bottles with tap water after they were emptied.  That helped a lot!

Once again, the two plastic dish pans were indispensable.  I purchased them originally for cleaning garden produce but they work great for what they were originally intended... the washing of dishes.  They are also handy because once that water was no longer clean, it was easy to take the dish pan into the bathroom and pour the water into the back of the toilet.  No water went unused!

Now that I have running water again, I've been doing laundry and cleaning but I'm also going to make one of the Taste of Home Recipes today or tomorrow... the Upside-Dow Apple Bacon Pancake recipe.  Since the ingredients have been purchased already, why wait?  I'm looking forward to trying it, as soon as I saw the ingredients, it sounded so good.  I mean, really... bacon, apples, pancakes???  Yes, it is higher in carbs than I usually have for dinner so I will take extra insulin!

I used to subscribe to Taste of Home and it always has good down-to-earth recipes in it.  However, my first love in cooking magazines is Where Women Cook, which is published quarterly.  This was always a good magazine but when they changed publishers a year or two ago, it went up another level.  Like Where Women Create and its' other sister magazines, it contains stories of different people and in this title, they share their favorite recipes.

I've been looking forward to this Holiday issue since they previewed the cover on Instagram a couple months ago. I've quickly perused it but I've been too busy with change of season (and no running water) activities that I haven't had an opportunity to choose recipes to try from it.

Everything is almost back to normal as far as cooking and housework.  I admit, sometimes I think living in simpler times would be lovely but it doesn't take much to realize how much I appreciate today's labor saving devices!
Posted by Brenda@CoffeeTeaBooks at 1:44 PM

Thank you for the reminder about the importance of water storage for emergencies, Brenda! We are always wondering if we have enough but I'm sure we don't (especially the non-drinking water). So this will help me to begin the storage process right now! : ) Mary S.

Water crisis....I feel your pain!!. Knock on wood, its been a while since I've had one. I got to the point where I have a tool box filled with every type of PVC fitting, extra pipe and always a can of fresh glue.

I know you don't have lots of space, but I ended up with a 30 gal blue food safe barrel and lid that I store in the basement with water....washing and flushing water. The barrel was probably $7 or so. I also have a couple blue 5 gallon jugs...but they are getting too darn heavy to manage up the stairs with...age. sigh

Another water event at your place! I am so glad that you are a pro and knew what to do immediately. And I am glad that it didn’t take forever to get the pipe replaced. Sounds as if this could be the end of water pipes failing. Now I trust that you have the opportunity ti relax and enjoy the magazine and that delicious sounding recipe, I hope that it is even better than you imagine. You certainly have earned it.

We're truly blessed to have the plumbing and easy access to water that we do. One good thing about this pipe situation: it's replaced and updated now, so no worries that will happen again any time soon.

I used to love Taste of Home. It used to be more...homey. It seemed to change the last couple of years I subscribed, until I finally stopped subscribing. I had not heard of the other one--will have to look it up.