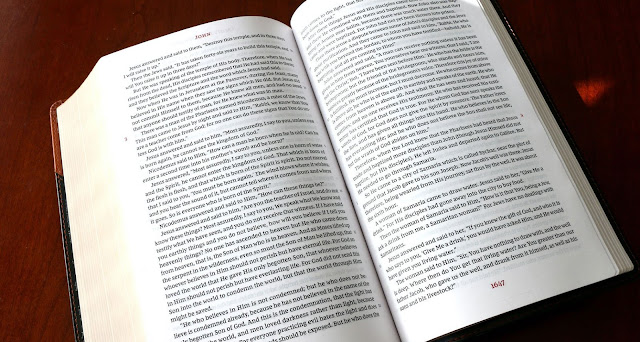 I don't make New Year's Resolutions but for many years now, I have asked God for a "word" for the next year.  Something that would be my Due North in my pondering and in what He wanted me to concentrate on for the year.  It has always come by Christmas and usually by Thanksgiving.  However, this year I thought I didn't have a word.  Nothing came to mind!

Until... I was watching a women's conference speaker on television during my blog break and she gave the subject of her teaching that day.  At which time, I realized that God had been nudging me toward the subject for months, even though I hadn't considered it as an "official" word from Him.

I messaged my daughter and asked her what she thought of the word and she agreed it was a good one.  So the "word" He gave me for 2019 is... discern.

The need for discernment is not new, it was probably one of the earliest teachings I received as a new Christian. I have long prayed for my own discernment to be sharp as well as for my family to have that gift of discernment.  For instance, the ability to discern whom to trust and not trust through the years.  So that need has been around since the Garden... and those residents apparently ignored it.  Which is unfortunately easy to do.

However, what is new is the increased amount of deception in the world today.  It seems I am constantly asking God to clarify what is the truth in a situation and what is... not real Truth.  For even the Church is accepting as Truth ways of living that the world in general was appalled by a generation ago.

My need to discern what is Truth goes beyond what the world is saying.  I have learned that I need to discern when watching all TV news, all articles, and even following what long time trusted conservative and Christian outlets are now writing and saying. The enemy is weaving deceit in every part of society, including those I could once trust.

For instance, I had a favorite news source online where I would find good articles and commentary from a conservative worldview.  But something began to happen early last year when the host of the program began to include commentary that I believed was not only a non-truth but close to heretical in the teaching.

I had to doubt that person's ability to discern any kind of news if he could be so far off in his current commentaries. I was not alone in my alarm as others began to notice his "commentaries" that were becoming increasingly anti-semitic. I had already stopped listening to him very often but I made the decision to remove his website and another from my Bookmarks.

Now, there are media sources which I know are saying things that I do not believe are true.  I don't even bother giving them any of my time.  Their worldview (the filter in which they decide what is Truth) is almost always one that has no respect for Biblical Truth.  It doesn't take a gift of discernment to know where they stand on issues of faith.

I need to constantly reset my plumb line toward True North.  It tends to wobble once in awhile.  Oh, not the big stuff.  I am fairly secure in my standing firm in the doctrines of the faith... the virgin birth of Christ, the Resurrection, the return of Christ (although I do not consider discussion on when He returns to be something to divide Christian friends).

The enemy of our souls knows us too well to try to slip in a big deception if we have walked with Christ for decades and had good teaching.  No... quite often it is the small stuff that brings about a crack in our foundation that can turn into a chasm.  In much the same way a little flirting doesn't seem to hurt but that is the way most adultery situations begin.

I have begun in the last year or two to become even more choosy over what books I accept to review.  For I was finding more books that were being written, especially from bloggers who became well known authors, that included these fault lines of doctrine.

I'm not talking about becoming legalistic here for anyone who knows me well also knows my feelings towards legalism.  I would rather spend time with a person of completely different political leanings than a legalistic Christian for I saw the resulting damage legalism did in my own family before I was born.  I want to remain faithful to God's Word but I do not want to tear down another individual to do so.

No, the discernment I need is the understanding of what God's Word is saying. I need to discern when is the correct time to say something, when I should pray instead of speak, and to ask God to love the unloveable through me.... even especially politicians.

I have to admit that I so often find the day having passed by in a flash and I still haven't opened my Bible.  So daily Bible reading is becoming a higher priority for that is the plum line!  I'm also going to read more biographies of men and women who have walked steadfastly before God in the past and adding them to my current reading.  I want to know how they remained faithful.

I'm just beginning to really ponder the "word" for all of its' implications in this new year. It is one that comes with many layers of meaning.  I think we all can be certain of one thing... we all will require more discernment as the year continues... and God's wisdom.
Posted by Brenda@CoffeeTeaBooks at 5:35 PM

I love your word and your thoughts today. Great post. I love to read biographies in general. I just love to read about other's lives, but what a great idea to look for those that are about those who have walked steadfastly with the Lord. I like that. I will be searching out some of those myself. I don't comment often, but read often:)

So glad you are back from your break! I’m giving up Facebook for the rest of the month, so I appreciate reading my favorite blogs even more! Interesting word God gave you for this year! A good one we all need for these times we are living in, for sure! And we definitely need the Bible for our “plumb line”! My favorite time of day is in the morning when I can get quiet with God and read my devotions. It keeps me grounded and focused on what’s important. So glad you were able to pick up the Cozy issue from Bella Grace mag! It’s full of wonderful ideas for getting cozy! Be Blessed!
Laura C. (WA)

Such a timely word for this day and age. I was not sure I had a "word" for this year, but reading your post brought to mind a word I had previously thought was my word for 2019 but I was not sure. Now I feel more settled on the word "seek". Seeking Him daily (or more often!) will be my goal.

I apprecicate your writings very much. Thank you!

You are so right now. In this day and age where things are different than they were when we were growing up. Discern is right.

Excellent word, and so needed! What you’ve said is the truth, and we can all learn to be more discerning.

Well-chosen, my friend. And I agree, it's the little things that can slip in and take us off course!

What an excellent word, Brenda! It is indeed so very important. And indeed we all do need to use discernment every day ... "and so much the more, as we see the day approaching".

What a good choice! I see the same problems you do, and I also have become very selective on my sources. You might enjoy a book by a young pastor's wife. It's All That's Good: Recovering the Lost Art of Discernment by Hannah Anderson.

Praying for discernment has become routine for me, but I agree that things seem to have gotten exponentially worse in very subtle ways over the past five or six years. There are some online friends who I assumed had a solid faith and I've watched them fall and/or walk into all kinds of beliefs that have left me just stunned. Really.

I also agree about the books. I am on a review list for a publishing company I used to respect a great deal. Something has changed, though, and I no longer feel like I can basically assume that most everything they send me will be theologically sound. It's to the point that I no longer request any books and most of the books they send me I don't even look at. It's very sad.

Trying to discern the truth is exhausting and time-consuming lately. It's really not healthy for our culture as a whole. Parenting children in the midst of it is no picnic either.

So true! We surely need more discernment.
I am increasingly dismayed at what some christians? are saying these days.

All true. Discernment and looking to Him for it is imperative. I am not one to routinely look for a "word" for each year, though sometimes there is one for a "season". Currently it's "practicing His Presence".....thank you, Brother Lawrence. Should've gotten on it long ago, but it's priceless and transforming. Of course, His timing is always perfect.

I've been reading more biographies of men and women of God in the past few months. Right now I'm reading one about Charles Spurgeon's wife. Amazing what an impact she had on his ministry.

No word for me unless The Lord gives it. I am not looking for one. Your word is a good one; a real challenge. I am always surprised by what Christians fall for...and we ALL fall for something. May The Lord get us back on track. You are right: so many things that would have been decried just a few short years ago are promoted today as normal. Come quickly, Lord Jesus.

I too love this post. Everything you wrote was honest. I have been looking to discern more and more. Thank you for another interesting, well-thought-out post.

What a great word to start the new year, but a hard one for sure. Discernment is such a hard thing to in this day and age of lies and deceit. I try to stay away from the news, most of it is so hard to watch, and I don't believe much of it. I think staying close to The Lord, reading His word, and trying hard to follow Him, is the only way we will be able to stand these last days. Thank you for sharing!