Living the Pantry Lifestyle - I'm back! 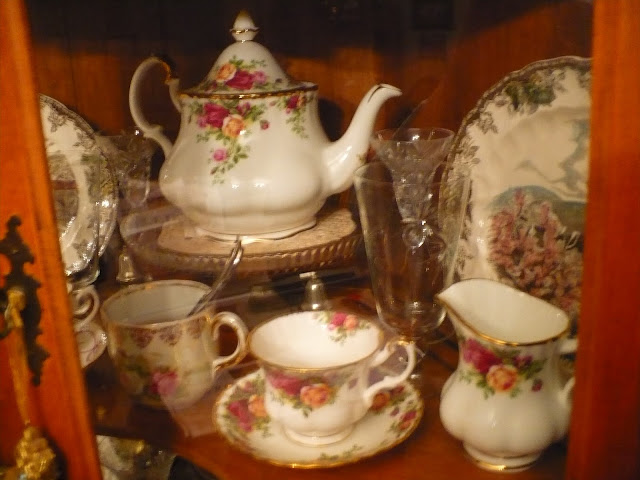 I only took slightly less than a couple of weeks off and it is still kind of difficult to get back in the swing of things.  Honestly, I can easily understand how blog friends who took an extended time off of writing ended up not returning at all.  Blogging, like most things we do, is a habit!

The one thing that keeps me coming back... well, two if I were to add blog friends... is that God keeps giving me ideas to write about.  That was the deal I made with Him, you know (as if the Almighty would handshake a deal), that I would write as long as He gave me something to write about.  So far in these past years since that ummm... deal, He has kept up His end of the bargain.

I have been pretty much offline these past two weeks.  Just posting on Instagram once or twice before today and reading a few favorite blogs (without commenting).  The first week I was finishing Christmas clean up and doing some more decluttering.  I also watched some Christmas movies on the Hallmark Channel before they ended and watched a few Christmas DVDs of my own.

The second week went by in such a blur that I can hardly remember what I did.  I can't tell you how many times in the past two weeks that I have mentioned to a friend "this day flew by!".  Doesn't it seem like Winter days (for those of us North of the equator) seem shorter because of the sun going down so early?

Now, I must admit that I'm not ready to give up Winter.  Especially if I don't have to drive on slick roads.  It gives introverts permission to curl up on the sofa with a book, a throw, a hot beverage, and a family member with fur (Florentine is the cuddliest cat we have ever been owned by).

I purchased two Christmas gifts for myself at Barnes & Noble about the time I took the blog break, The Cozy Issue of Bella Grace and the Merry and Delicious issue of Where Women Cook.  If you have read either of these magazines, you will know that they are pricey but are really like softcover books... with gorgeous photos and no advertisements.  B&N had originally sold out of that special issue of Bella Grace but when I stopped by on my way to my retinal specialist appointment, they had restocked!  Yay!

Both magazines have been sitting in the basket by the sofa, picked up and read quite often when I have had a short break or just needed a mental vacation.  I highly recommend these special issues of both magazines when you can find them.  Both are probably not on newsstands now but I expect they are still available at their respective websites.

I have been reading a couple books to be reviewed (including the new book by Karen Andreola!) and I am just starting a re-read of Goudge's Elliot trilogy.  As I write, The Bird in the Tree sits at the side of the keyboard, waiting for the morning's work to be accomplished.

The dishes have been washed except for a soaking saucepan, which was used to make oatmeal for breakfast.  I have a loaf of bread rising and almost ready to pop in the oven.  I love the new bread machine (and the friend whose gift it was to me).  She has been hearing for years about how I want to make bread dough in my mixer but I don't have the energy to do so, anymore.  (Most people with an autoimmune disease will understand the fatigue challenges.)

As with my old machine, I only use the dough cycle and then finish the bread in the oven.  I'm sure there will be a day that I actually bake bread in the bread machine... but not too soon.  The warmth of the oven feels good on this cold and snowy January day.  The bread will be served with leftover ham and bean soup.

I will be back tomorrow to share my "word" for the new year.  I hadn't planned on having a "word" this year but it seemed God had other plans (as usual).  Then next Sunday, I hope to have put together my favorite books of 2018.  Due to the significant eye infection and slow recovery, it is an easier list to pick from this year.

Mentioned in this Blog Post
The Bird in the Tree by Elizabeth Goudge... here.  It is the first book of my very favorite Goudge trilogy!  I cannot recommend this trilogy highly enough.

Disclaimer:  Most links to Amazon.com are Associate links.  I thank everyone who has taken the time to enter your Amazon shopping through a link or the widget!!!

Posted by Brenda@CoffeeTeaBooks at 1:10 PM

That line...”I’m not ready to give up winter yet.” Well, that is exactly the opposite of my thinking, but I like yours better. If winter were not so labor intensive for me, I’m pretty sure that I could settle into it more comfortably. Oh I do love a cozy cat... I am still reading Christmas cozies á la Miss Read. Very enjoyable. Glad that you are back! (Yes, much easier to continue blogging than to take a break and return.)

It is snowing here and I have been on the couch most of the day enjoying my rest and I have caught up on some shows and on some reading.

I’ve ordered Karen’s new book, too! Can’t wait! That trilogy of the Elliot family is a favorite of mine, too!

So glad you're back.. missed you! Happy New Year! Blessings, Sharon D.

Hi Brenda,
Good to see you back on the blog! I've taken quite an extended blog break myself...since early November! And, we must have been thinking alike...I wrote a Return to Blogging post today, too! That is...if anyone is still reading blogs these days. I think folks are more involved on Instagram because it's quick and easier.
But...I miss everyone and all the friends made from years of blogging. Hopefully, it's not a dying art.

Glad you're back! Yes a couple more bloggers bit the dust recently. I always looked forward to the Iowa Housewife blog....sigh. They are leaving it up though.

I spotted that picture of the Bella Grace issue....which lead me to the website...which...well okay its in the mail. I don't paying a bit more for a quality magazine. Then I just leave the cheap ones alone (or my mother sends them over to me). I have a magazine rack where I keep things issues of Bake and other nice reads.

I too use my dough cycle liberally...the bake cycle, not so much. I bought a Norpro 12" bread pan which makes a really nice size loaf with the slices not being too tall.

Happy New Year and I am so glad you are back!
I look forward to your book reviews and weekend posts. You are an inspiration to me and I am learning so much from you. Thank you!
-Terri

I re-read the Elliot Trilogy nearly every year. My mother purchased a copy of Pilgrims' Inn at a library sale when I was in my teens. i so loved the book that I took it with me when I married. I read a library copy of 'The Heart of the Family' and eventually acquired a copy, but it was years before I read 'The Bird in the Tree.' Other Goudge favorites are 'The Rosemary Tree,' 'The White Witch.' The Elliots are comfort reading when I am a bit worn down. Although the stories are familiar, I find a fresh joy each time I turn to them.

Yes, I'm on my 5th or 6th bread machine for the dough setting to make rolls, sandwich rolls, sweet rolls, etc. Won one years ago, bought another at a garage sale, and my last one was a birthday gift from my daughter - not new but used only a few times. They are so very helpful. I freeze what we don't eat the first day and defrost 30 seconds plus in the microwave. Taste like they just came out of the oven! We even use the larger ones for sliders now.

Glad you are back! Seems like you were "gone" a long time! Winter can leave any time, as long as it stays gone. I'm ready to plant something!

I have to thank you immensely, Brenda, for introducing me to the Elliot Family trilogy. I purchased both the Kindle and paper versions. They are books I tore through as they are such good stories and then had to stop and reread certain passages slowly & thoughtfully. I believe Pilgrim's Inn is my favorite but that was when I realized the depth of the writing. I'm looking forward to reading them again this summer.
Right now I have The Dean's Watch and The Scent of Water by my chair right now. I plan to start reading one of them today. I think I've read them before but I'm not sure. If so, it'll be like welcoming old acquaintances in again.

As for blogging, I'm happy to see you back. I am one of those "lost bloggers." I keep thinking I should get back to it and then I wonder if I really have anything to say? Is just reporting on my farm-wife life all that interesting to the masses? lol Something to prayerfully consider.

After your many recommendations over the years of The Bird in the Tree (and other Goudge books), I finally have it en route from my library system. Thanks for keeping on mentioning worthwhile reads because eventually your suggestions sink in, and you haven't steered me wrong yet! Blessings to you and yours.