Sunday Afternoon Tea - Trials and the Ability to Empathize 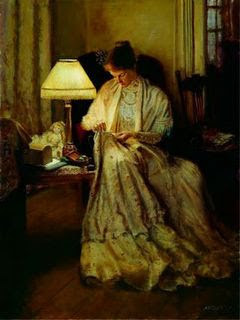 It has been lovely these past couple of days to open the window in the Study and feel a cool breeze blowing in from the forest.  I still can't see clearly but I've enjoyed spending a little more time on the computer and that cool air refreshes my spirits.  I do not do summer well and even a temporary cool down is appreciated.

While my eye is improving at a very slow rate... I still see through a layer of fog... it is a relief to have even some improvement.  I must admit, it is frustrating to experience this latest trial with this eye when it was just beginning to be fully healed from the last one.

I was listening to a sermon about Job last week on the Moody Founder's Week program on the NRB channel.  The speaker came at Job from a different perspective than I had heard before, reminding us that we can find joy in the time of trials even if we never understand the "why" behind the trial.  God never did explain to Job what we knew, that it was God Himself that allowed the trials for a purpose.

I have lived long enough to understand that God uses our trials and experiences we go through to become the person He wants us to be and to use us in the way He chooses.  Which is also why He gives the grace when we experience trials.

Have you ever looked at another person's trial and thought you could never live through something like that?  You most likely couldn't without the grace God has given them.  Have you ever come through a trial and wonder how you did it?  His grace.  His purpose.

I was thinking this week about this subject and how we live such a finite existence.  What brought these ponderings to mind was hearing a talk about Christians and race relations, which caused me to recall a conversation (on Instagram) with a fellow blogger.

She had complained that her neighbors in the mostly white and rural area she lived seem to not care about race relations.  She felt strongly about them after adopting at least one African American child.  I wrote her to share that I can totally understand her neighbors since I was raised in such a small, rural, Midwestern town.

I can remember when I first saw an African American person.  It was that surprising.  I must have been five or six and he was cleaning windows at a department store downtown.  When I graduated from high school, there were only a few African American students.  Not in my class but the entire high school.

Even when I began spending time at the University, it was a different kind of racial situation because I got to know people from all over the world and all on an even level as fellow students or as professors.  When I tell people I was color blind whenever I was around the University, it is hard for some to understand but it was... and is... true.

I didn't come near to the kind of racism she talked about until we lived in the Detroit area for awhile.  You could cut the racial tension there with the proverbial knife.  While there were people of different colors who get along there, the overall feeling was one of great distrust.

What I explained to her was this... the kind of racism she talks about was never on my radar until later in life.  I never saw an African American person being mistreated because for the most part, they did not exist in my world.  I have a feeling her white, rural neighbors were not so much clueless as they just had not lived through what her child has known.

We can only empathize with what we have experienced.

That gets me back to the subject of trials and why God allows them.  When we hear of someone walking a path we have previously been on, we are far more able than others to be of help to that person.

What a difference it makes to be able to say that while your circumstances may not be exactly the same, they are enough alike that you can feel what the other person is feeling and you can be of encouragement to them that God does care, even in the midst of what they are experiencing.

We are to be God's help to another person in whatever way He makes that possible.  Quite often, I have responded to a blog reader going through trials that... because I have walked that way before... I know how it seems the trial will never end but it will.

Oh, most likely not as we envision it but in God's way that He sets before us.  In His timing and not ours.  For His purpose is what we are becoming because of the trial and that can mostly be fulfilled by our spending time with Him and asking what exactly it is He wants us to learn.

Okay, I must admit that question has been made with a stomp of the foot and a rolling of the eyes by yours truly.  Fortunately, He is a loving Father and ummm... disregards the temper tantrum if we come to Him in all honesty.  He knows what we are thinking and feeling so we may as well be honest.

I'm not saying that trials are easy as we go through them and I'm not saying they all end.  Sometimes they just... change.  Whatever happens with them, He promises never to leave us or forsake us and I do not believe He ever wastes a trial.

My experiences and your experiences are being weaved together in such a way that we can be God's eyes, and feet, and hands, and teller of Good News to a hurting world.  There is a story only you can tell that somebody needs to hear.

Image:  Nostalgia-Mini by Clement Micarelli
Posted by Brenda@CoffeeTeaBooks at 2:55 PM

Great post! I sometimes think 'the world is watching' - both Christians and non-Christians - to our response in the hard things allowed, sent, whatever into our lives. Sometimes the most unexpected and unexplainable and undesired things give us opportunities and people to speak a word to in the midst of our hard. Only eternity will show us what we cannot see now during the trials. Pray for continued healing of your eye.

Glad to hear your weather is cooling . . . we're still super hot in the Pacific NW!

I agree with you, Brenda! Many people surprisingly have little experience with people from different cultures and skin tones.

Continuing to pray for your complete healing!

What an excellent post, Brenda! The Lord has certainly worked wisdom in you through your trials. I'm praying your eye improves soon!

Everything I read or listen to lately seems to be on this theme or closely related to it. I guess that's part of God's grace in my life - like you said - to help me get through some of the hardest trials I have ever faced.
God bless you and may your healing be swift from here on.

Yes, I think God weaves and works it all together such that we only “see” what was going on with hindsight. So much in this post that I’d like to comment on, but won’t. I could take it behind the scenes, but you shouldn’t spend much time reading screens. So glad that you are able to read some and that cooler temps have come for a while.

Indeed! I have been praying to have more empathy for others.

Still praying for your healing, Brenda! This is a very interesting post which made me rethink several things that have happened in my life.

Sometimes God makes us go through things for the benefit/learning of other people in our lives.
How we come out of that experience is the joy that God brings to us.
Glad to see you sharing more.

I just saw on your side bar the post from Sallie Borrink about the FREE Kindle books, thanks so much for this info you share!

Good words, Brenda. I have more problems with wondering why with those things that happened to me as a child...than as an adult. As a child, one has no rights and no recourse (or at least in my day)...as an adult often we can walk away...or make the difficult choice to stay put. It is my hope for the next life that enables me to stay put. Because THERE at least I have hope of fairness and justice. It is slim and rare here...at least in my life. Thanks for the good words. Blessings on your eyes. It is so hard to not be able to see clearly. I too have a veil over mine. Though perhaps with the years it has lessened a bit.
Elizabeth