Sunday Afternoon Tea - The Dark Night of the Soul 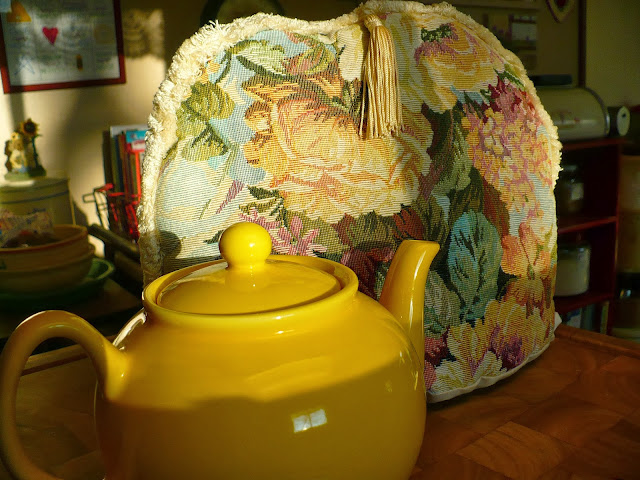 The stuff of Earth competes
For the allegiance
I owe only to the Giver
Of all good things.
Rich Mullins

Recently I was attempting to find a bit of spiritual refreshment in my Study but my mind would not concentrate on the chapter of Ephesians I was attempting to read.  Those things of life which had brought me to this need for the Word were circling my thoughts, bringing with them a wrestling for my attention.  Not to mention my peace.

Before sitting down, I had dusted off a Rich Mullins CD and popped it in the player.  Finally... after really trying to concentrate... I closed my eyes and listened to his music.  Mullins was (and is) one of my very favorite lyricists as well as singers.  He was a true troubadour of the Faith.

Just as I closed my eyes, the song If I Stand began playing.  A song that has always spoken to my soul.  Even then, there is one particular section of this song that I adapted to be my own.  (Most likely me and thousands of other lovers of Jesus who walk this journey.)  Those words are found under the image above.

Mullins has been in Heaven over twenty years now, having died in a traffic accident in his early 40s.  Which means it was before that time when I first heard this song but I can still recall that Eureka moment when I realized what Truth was spoken in those words, "The stuff of life competes for the allegiance I owe only to the Giver of all good things."

This winter was the worst that I have had in many years. I found myself spiraling down into a darkness that left me in a place I have temporarily visited but rarely have I spent very much time.  My personality is one that tends to recover quickly from such feelings.

I know many who live with clinical depression and I can only guess that this was the way they felt far more often than I ever did.  Every part of each day was seen through a dark and shadowy lens.  The smallest disturbances, those which I could normally brush off easily, began to drag me down.  The real challenges sent me over the edge it seemed.

I realize now that this was partly brought on by a lack of sleep after months of waking up every two or three hours with a cough and congestion.  The enemy of our souls has known for millennia that to weaken the body is a portal to exhaustion... not only to the body but also mind and spirit.  The stuff of life was such that I could see no way out, it was sapping all of that allegiance I owe to God.

I didn't doubt God, I doubted my ability to go on.  I did not lose faith... I lost grace.

It was during this time that I felt that nudge of God to get rid of those things in my life (for which I had control) that helped bring me down.  I have written about this journey already, getting rid of certain websites and the decision to stop listening to some people online and on television.

If there was one phrase I heard quite often when I sought wisdom, it was "put nothing between Jesus and me".  I have realized how much of the way I look at the world is filtered through the teaching and opinions of others and I needed to get back to the basics... the Word and God.

Not that all of these people were wrong, I'd say most were Biblically correct.  They had their place in my journey at one time. However, a couple of them had a style that tended to bring fear instead of faith.  When one is trying to regain the light in their days... it is necessary to stay away from such fear mongering.

I think most Christ followers go through "the dark night of the soul" many times in their lives if they live long enough.  What I have found is that it is when we are walking this part of our journey... when He allows just enough light in front of us to take the next step... that we tend to grow closer to God if we follow His guidance.  It is that reaching for God's light that grows us into more of Christ-likeness.

I am beginning to feel better.  The stuff of life that brought me close to the edge remain and barring a few miracles, will do so for a long time.  However, I am getting better sleep now and let's face it... the longer days of sunlight for those of us who have been experiencing the "winter that does not end" bring their own kind of joy.

I'm thinking that getting rid of outside sources has helped a great deal.  Those which only required removing a website from the Bookmarks, or turning the channel, or deciding to do something edifying instead of listening to fear mongering.  Those things God has said need to go have been laid aside and in their place has been found... peace.

We will all experience a certain amount of peace robbing, joy robbing, faith robbing moments in our lives.  At such times we need to hold on to God's Word and His Grace.  I have heard it said that part of the reason we are told in the Book of James to consider it pure joy when we face trials is this... they provide a way that we can show our trust in God even in the darkest of times.

Once we reach Heaven, there will be no opportunities to give Him the sacrifice of praise in the midst of trials for there will be none there.  The war will be over and our King will be forever on the throne.

Posted by Brenda@CoffeeTeaBooks at 12:33 PM

I’m not melancholy by nature but this past year, I’ve struggled with feeling...down and discouraged. I agree with you about looking to Jesus and the word first and foremost. It helps.

Music seals to me too, and a Rend Collective song ‘Counting Every Blessing’ has been a good encouragement to me.

That comment should say ‘speaks’ not seals! Can you change it for me?

Amen. I hear and understand, another of your posts that speak deeply to me. I too am in the process of removing all in my day that separates me from our heavenly father,and feeling more peaceful as a result. Thank you and I hope and pray for all good and peace to you.

your words today, were a balm to my soul, as I struggle to cope with an aging dad, whom at 87 is just starting to "show his age". dealing with past hurts and anger in a relationship with a sibling, which is now bubbling to the surface. the enemy will use any means he can to wear us down. to give up. how comforting to have Our Savior to turn to! thank YOU for returning my attention to Him. LynneinWI

So much to ponder and then you leave us with that parting thought that is enough to chew on for...forever. Depression or gloomies are well known to me. I am so happy to have Jesus to trust in with every single need of my heart. “Take it to The Lord in prayer. Jesus knows my every weakness...” May is a rough month for me, though I am trusting that God will show me a way to navigate through without falling into a pit. Thank you for sharing your thoughts, which always gives me plenty of thoughts of my own. Sending love...

By the way, I read Deanna’s comment as “music seals me” and thought she was saying that it was like healing balm on a tender wound. I rather liked it that way! 🙂

I finally deleted my Facebook account a year ago after realizing its negative effect on my days. Not only was it a time waster, giving me nothing of value in the end but also the anger, division and stupidity was depressing. I literally felt a weight lift the moment I pushed the computer key to end it and it has been, bar none, the best decision I have made in years. Do I miss some aspects? Sure, especially photos of long distance family members, but I make other arrangements to compensate for that. Otherwise I am super happy with the choice and my life is enriched by the ways I choose to spend my time now.