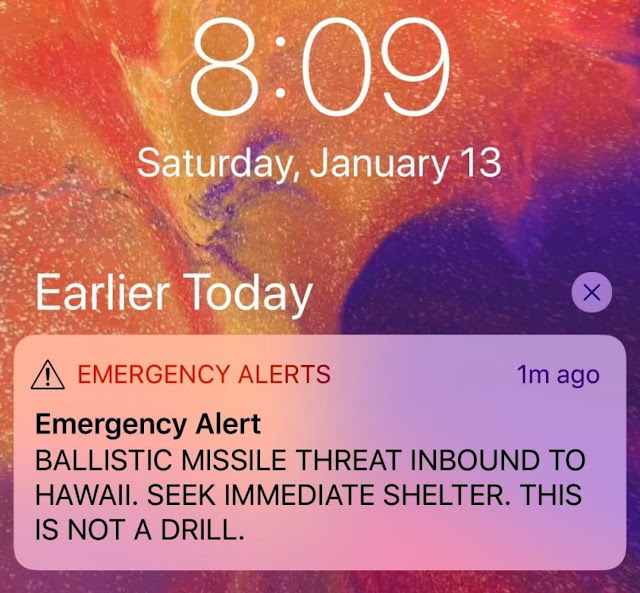 I cannot imagine what it was like to be in Hawaii when the sirens started up recently.  Especially when it took over thirty minutes for the officials to let the people know it was a false alarm.  It had to be a terrifying experience.

It got me to wondering, "What if the sirens went off in my town?".  I understand that the possibility of a warhead landing in my town would be minimal and probably only by accident.  However, the sirens would go off over the entire country if a missile was on the way anywhere... or the radar indicated a missile.

We also know that sirens can go off to alert citizens of danger other than nuclear warfare.  For instance, we used to have a chemical plant in our area and if an accident happened at the plant, the civil defense sirens would be sounded for people to stay inside.  If you live near a nuclear power plant, I understand the sirens would go off if there was an accident at the plant.

I don't worry at all about nuclear war, mainly because as I've mentioned before... I prepare for what I know I would survive and being that I depend on insulin to live... well, you get it.  So why fret?

However, growing up in the cold war era, we were constantly hearing about the possibility of war with Russia.  I probably got a little too ho hum about such a possibility, although the 1980s TV movie The Day After scared the bajeebies out of me.  In that movie, there is only thirty minutes to prepare before a missile lands in Kansas.

We know that it doesn't take an emergency in our own area to empty grocery shelves right away.  Katrina showed us that when grocery shelves were either empty or sparse many states away.  Where I live, even the anticipation of a winter storm a couple days away can empty shelves of milk, bread, and other essentials.

So my first thought about such an emergency is if I could survive without leaving my home for awhile as might be necessary in a real emergency.  Do I have basic food, medicine, water, etc. in the house?  It honestly doesn't take that much time, money, or even space if purchases were made when there is time to think through what essentials would be necessary... as opposed to running to the store at the last minute and throwing things into the grocery cart.

This makes sense for any possible situation whether the extreme of the country targeted by a missile, a dirty bomb in a nearby city, an outbreak of a virus keeping everyone inside until the risk is over, or even the entire family coming down with the flu.

The other obvious thought I had was how to communicate with loved ones.  I know my son's cell phone number because it is one digit different than mine (we bought our original phones together when he was a teenager and we moved to the country).  However, I only know my daughter's as Speed Dial #3.  I do need to write down the important phone numbers, something I have had on my To Do list for way too long.

Our situation is different now with both people in the home being here most of the time.  However, would you know what to do if you have kids at school?  What is the school's emergency plan?  Most schools these days go on lock down and keep kids there in the midst of an emergency.  Would you be allowed to pick them up?

Would your children know what to do in an emergency? Who to call?  Whose house to go to should their parents not be there? From everything I have researched, I have found most kids actually enjoy having an emergency preparedness practice day and it does help lessen fears.  They are much more fearful if parents and grandparents are afraid of the "what ifs" and show fear in front of the kids.

I remember when I was a child, coming home from school and the house was empty... and locked.  My dad was suppose to be there but there was no one.  I didn't know that my dad had a heart attack and was dying in the ER.  My mother would suddenly realize what time it was and had our next door neighbor come to find me siting on the porch.  Hmmmm... maybe that was the beginning event of my being a prepper?

The truth is, bad things happen to good people.  Sometimes the cold war seems so much safer than the world today.  We knew that the Russian people didn't want a war anymore than we did.  Today we have the constant threat of terrorism and there are many more countries with nukes now.  Places like North Korea whose leader seems determined to send a missile to the U.S.

If nothing else this week, put some thought into two areas... do you have enough food and water to stay inside for awhile and would your family know what to do in case of an emergency?

I think you will find that being prepared at even a basic level helps alleviate fear.  I will include the link to the Deyo's info page below.  It contains links to a lot of free information, especially about nuclear and terrorist threats.

Of course, it is through trusting God that we really conquer fear.  I believe that He will not allow any nuclear event to happen outside of His ultimate plan for the planet.  There will be a time He does allow "all Hell to break lose" but until then, we are in the palm of His hand.

Our essential preparations are spiritual.  Trusting in the Lord for eternal salvation is of the utmost importance.  All the "what ifs" in the world could happen and what are the terrorists going to threaten me with... Heaven?

Please forgive typos and another "off the cuff" blog post.  There was no time on Friday to draft today's post so ummm... this is the draft!

LINKS
The Day After can be watched free on YouTube... here.  Should you be so inclined as to watch it.  There was such a concern for how people would react that counseling sessions were set up if needed the day after the movie!

The Day After DVD is available third party on Amazon... here. (Affiliate link)

Stan and Holly Deyo has an abundance of free information about possible threats and preparedness... here.  Be sure to scroll down the page for all the information links.

Dare to Prepare is available directly from the Deyo's website... here.
Posted by Brenda@CoffeeTeaBooks at 1:20 PM

"If you live near a nuclear power plant, I understand the sirens would go off if there was an accident at the plant."

This happened a couple of days ago here. It was just a day or so after the Hawaii sirens. Just like in Hawaii it was set off accidentally and there was no emergency.

The sirens in my town went blaring one fine Saturday afternoon. My sister (age 12) and I (age 16) were home alone. She absolutely refused to heed my warnings. When my parents came home a few minutes later, they found me cowering under the ping-pong table in the basement. 🙃 My sister was outside playing kickball with the neighbors. I think about that from time to time. I’d rather be more like my sister.

She and I discussed the Hawaii event. We wondered how miserable it must have been for people. The closest I can imagine to how they must have felt (and worse) would be 9-11.

So I am only interested in being prepared for food, water, and medicines in the case of sickness or a snowstorm. As you say, Heaven is no threat.

I remember those drills in school. People talking about fall out shelters- the movies. I agree with Vee heaven is no threat- I think that is because we are older. We still need to be prepared.

hm. the hawaii debacle.
the employee who went followed ALL the processes
to set the alarm is NOT cooperating with
the authorities. makes me wonder. big. :/

i ♥ what you said: 'heaven is no threat'