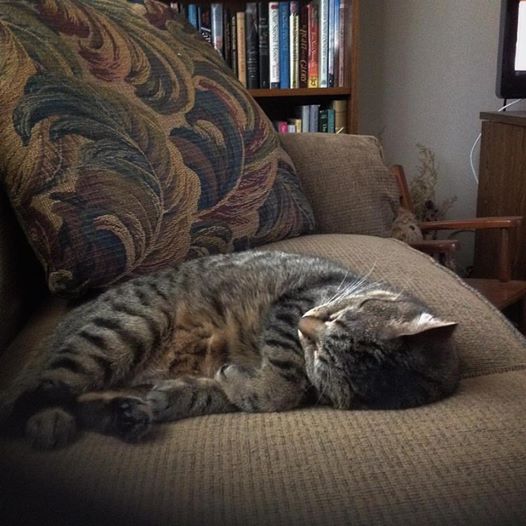 I haven't written a Florentine (aka: Florie) update in awhile.  Both of the photos I'm sharing today were first on Instagram (@coffeeteabooksandme) but they are so cute, I wanted to share them here.

She is settling in quite nicely.  The only signs of her previous abuse are being skittish to loud noises, never wanting to be picked up, and not liking to be petted on her head when we are standing.  Otherwise, this little cat wants to be loved and petted and paid attention to all the time.  She is definitely still in her late kitten stage.  There is no keeping up with her and much like when one has a toddler at home, I appreciate her nap time.

The photo above is one I took of her when I was reading and she had curled up next to me.  I must admit being distracted by those cute paws and nose and that orange coloring on her belly.  She even looks prettier than when we brought her home from her cage at the shelter.  She has won our hearts. 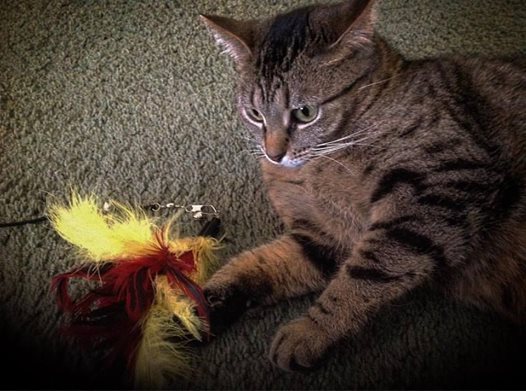 Although she plays with all her toys her Auntie Bonnie has sent her, this one with the feathers is her favorite by far.  She will stand by it with the feathers in her mouth (I still haven't been able to get a photo of that!) or with a paw on the pole part of it just waiting for someone to stop and play with her.  This photo was when she had conquered the feathers after my husband had been playing with her, much like a jungle cat who had just brought down their prey.

Florie is the poster child for an animal flourishing when given love and the occasional Fancy Feast.  She gets her Fancy Feast on Wednesdays and Sundays but hopes for it every day.  Don't worry, she is spoiled in so many other ways.

I still cry almost every day, missing Victoria so much it hurts.  Victoria was my furry pal, my much beloved Maine Coon soul mate.  The kind of animal friend that only comes along once in awhile.  My friend, Kathy, who recently moved on to Heaven, had multiple cats at any one time through the years but her much beloved was Pudge.  I like to imagine Pudge (no longer aged) came running to her as soon as she stepped into Glory.

Having said that, I am so glad we rescued Florentine.  She has us laughing so often and while we tell her we are laughing "with her, not at her"...  we are laughing at her!
Posted by Brenda@CoffeeTeaBooks at 10:14 AM

Florie is such a darling kitty!

You and the Hubby have been a blessing to her as much as she has been to you!

Glad you're all thriving!

I had a Maine Coon cat and it was my favorite cat. Smartest one too!
Brenda

Florie is a love and I am very glad that your heart is large enough to welcome in another kitty. 📚☕️🐈💐

What a lovely cat your Florie. I am so glad that she found a loving home and people who take care of her.
I feel sorry for you still missing Victoria so much but it is understandable, being just a reader of your blog I miss her too, I enjoyed posts with her pictures so much. I like your vision of a beloved cat greeting your friend in the better world, I've never thought about this but I like the idea.

I'm so glad that Florie is part of your family now. Our Rufus (AKA Doofy) was also a rescue cat and he is crazy busy and a total spaz, drives us nuts getting up on everything, but he is also a cuddler and also keeps us laughing. :)

Glad you have an entertainer...pets do make us laugh!!
Elizabeth in WA