Living the Pantry Lifestyle - One To Do At a Time 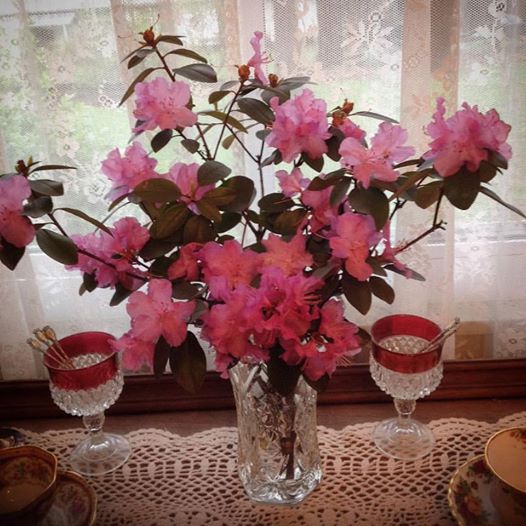 Easter is one week from Sunday!  How did that happen?  I guess with the cold and rainy weather we have had for awhile, it didn't seem like winter had ended.  The sun is shining today but it is deceptively chilly.  That's okay because it is slowing down outdoor work.  It is to reach the 70s tomorrow so I'm sure blossoms will be blooming everywhere.

Our azalea bush was gorgeous this year.  We only have one left from the four that were here when we moved in.  They did not survive the crazy warm-freeze-warm-freeze springs we tend to have each year.  This one, in a beautiful lilac/rose shade, is tucked next to the deck stairs where it is protected.  Even then, it usually blooms and then we have a freeze soon after.

This year, it was windy and cool but we didn't have a freeze until it had completely bloomed.  We can see it out of the kitchen window and each spring the color is appreciated.  With a rain/snow mix predicted,  I cut back quite a few branches and brought them in.  It was like bringing springtime inside.

My daughter-in-law asked if her family could spend Easter dinner with us this year so we could all see Piper in her cuteness.  She has a new Easter frock.  I look forward to seeing everyone and all prayers are appreciated that my health continues to improve so I can cook the extra food and set a pretty table with Great Grandmother's vintage china.  My mother-in-law used it every Easter, too. The house may be far less spiffy looking than it was when they were here at Thanksgiving but they understand.

So the symptoms returning last weekend were enough of a warning to make me rest a lot and eat as healthy as possible.  However, I'm on the mend and all that is left is sinus congestion and a cough, not uncommon this time of year.  The Midwest weather in March and April is always a little crazy but this year seemed to be worse than usual.

I admit to a little stress building as I thought I'd get even further behind on the Must Do-To Do List.  However, I felt the nudging of the Lord to attempt just one thing a day.  I can do that, right?  Without wearing myself down and the infection returning?

So that is what I did this last week.  I took out my planner and wrote one thing for Monday, one for Tuesday, etc.  Monday's "One Thing" was to call the telephone company.  Finally.  Our phone has had static in it for months and it was getting worse, so was our Internet.  I deeply dislike calling for service because of getting the run around.  Especially with the phone company.

But I did and a tech was out the very next day.  We were blessed with a fabulous technician!  He was able to trouble shoot our problem (the line where the lightening strike had entered the house years ago had become corroded, even though it had been replaced after the storm).  He put in new hardware and installed a new modem.  My Internet speed tripled and now people who call can actually hear what we are saying.

All because of doing Just One Thing.

As I felt better, I added one and then two things to the daily planner.  Nothing requiring much energy.  For instance, I usually do all my laundry on Monday (except for gardening season when clothes get dirty fast) but this last week I only did part of the laundry.  So on Friday, I did that last load that was missed earlier in the week.

It was so good reaching the weekend and being able to see what had been accomplished.  Rather than getting cranky that I couldn't do everything on the list, enough was done that I didn't get very far behind on what I wanted to accomplish.  The house will look "good enough" when company arrives.

A couple of things had to be put on Monday's calendar that I wanted to do on Friday but that's okay.  I just wrote (Monday) next to where they were listed on Friday.  We have to be adaptable and this time I had to run a couple of errands that were not in the original Friday plans.

With the warm up, the outside chores will begin Monday.  That will still require just one or two things on the list each day, going by the highest priority.  I will get a head start by having my husband take the shovels out to the garden shed from the porch and get out the rakes and hoe this weekend.  The annual (always anticipated) changing of the equipment.

I think spring is here to stay.  Even if it is dipping into the low 30s at night.

I think all of us in our condition and in our situation in life have to be very flexible and not hard on ourselves when we simply must rest instead of doing all we would wish to do...thanks for the encouragement!
Elizabeth in WA

The "one thing" plan works well for me, too! (And uoften the accomplishment of the "one thing" happens quicker than I anticipated and I am able to accomplish something ELSE as well. Funny how that works.)

So glad you are going to have Piper as a guest for Easter. That will make for an even more special day. How nice to have your "in-laws" and enjoy fellowship with them. Hope you are feeling better each day. Blessings, Sharon D.

Glad you are feeling better. Isn't it amazing how just doing one thing helps things get done. I have to keep telling myself that! Here in Ontario, I got my husband to take the shovel out to the shed. Then we had more snow :-( Oh well, it's melting today.
Blessings, Marie

Glad you're feeling better. Maybe if you don't feel well at Easter, your family could potluck-each bring something.

Florentine looks like such a sweetie. Give her a pat from us.

I'm glad you were able to do at least one thing a day that helped you feel prepared for Easter! God is good and I'm thankful you are well.

You are all going to enjoy Piper! She'll look so darling! Make sure to get a photo we can all enjoy!

Your plan sounds very sensible and doable. I am very happy to read that you are feeling ever so much better. Easter is fun to prepare and plan for. Hope that Easter is a beautiful spring day and that these wide swings stop. Take some pics of your pretty little Piper.

Wise advice, well said. Your azalea is beautiful! May your Easter be blessed! So lovely that Piper and her family will be with you. You know how to do this so it will not overwhelm you, but relax you....

I hope you are able to prep for and host Easter!!! This spring weather has been downright crazy! Getting ready for Easter too (and prom the night before!!!?!) and hoping everyone is healthy and nothing has to be cancelled!!