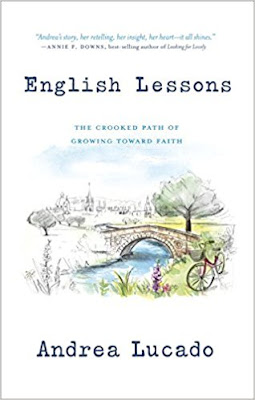 I don't review many books while they are still on a pre-order status but I'll make an exception with this one.  I liked it that much.

English Lessons is written by Andrea Lucado, daughter of pastor/writer Max Lucado.  In it she tells of her year living in England while working on a Master's Degree at Oxford-Brookes University, which is in Oxford.  It is the story of a young woman who was raised in Texas, a part of the Bible Belt where it was easy to grow up with Christian beliefs.

It is the story of culture shock in a country where one would not expect it.  Andrea felt left out her first weeks in England.  She didn't understand what they were talking about.  She didn't get the jokes. She dressed differently.  She was used to the Texas heat instead of the chill of the English climate.

Most surprising, most young people growing up in England had rejected the faith and as a culture challenged Christian beliefs.  Although she thought of going back home, she ended up staying and I for one am very glad she did.  For the story of her year in England is fascinating as well as convicting.

During this time, Andrea developed friendships with other Christians and those young people who had rejected their faith.  She learned to listen and to understand where they were coming from.  She has to rethink her convictions and not depend on knowing Christ only because her parents did before her.  She does not hide her doubts but shares how she worked through them.

This is the kind of book that is perfect for giving to a young person as a graduation gift or to anyone doubting their faith.  While especially making a great gift for a person in their late teens through their twenties, I enjoyed reading it as a grandmother!

Andrea has definitely inherited her father's gift with words and I would go so far to say she has refined them, finding her own style which makes this book very enjoyable as well as inspiring. Highly recommended.

This book was provided by Blogging For Books but the opinions are my own.

More information for pre-ordering English Lessons can be found... here.

Disclaimer: Most links to Amazon.com are Associate links.
Posted by Brenda@CoffeeTeaBooks at 12:52 PM

Thank you so much for this book review. Andrea's father Max Lucado is one of my favorite authors. In fact I am reading a book by him now "You Will Get Through This". If you haven't had the opportunity to read this one - it is wonderful. So glad I stopped to visit your lovely blog. Hopped over here from Brenda's - will be back soon to visit again. Have a delightful day.

This looks like a good one. I read her blog from time to time.

This sounds like a really good book! I love these kinds of stories.

I'm going to check out her blog, too!

Sounds lovely ... thanks for your review and recommendation.

Oh! Sounds like I need to read this one!!!! Thanks!