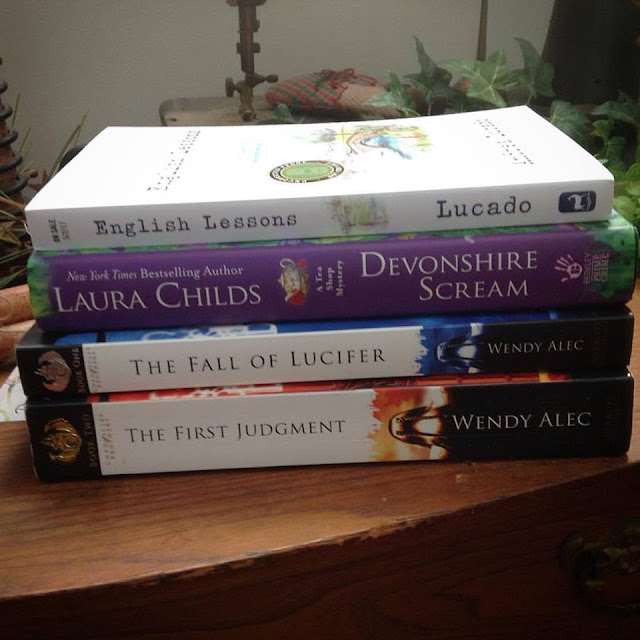 I didn't read very much the past two months, especially books that were not for publisher's review.  However, here are a handful I've managed to read and one I will begin reading soon. 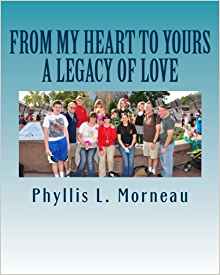 Not shown above is a book I read on Kindle called From My Heart to Yours: A Legacy of Love by Phyllis Morneau.  Fortunately, I had finished it before I had to limit screen time on the Kindle. It is the story Phyllis wrote of her family history.

While you may not think reading someone else's family history would be interesting, I found this very good.  Grandparents especially would enjoy it.  Within the various chapters, the author provides a timeline of world events occurring at the same time as her family's history. 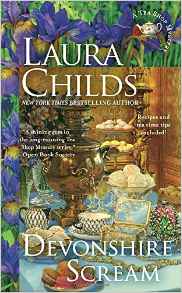 Devonshire Scream was Laura Childs new Tea Shop Mystery last year.  I love her mysteries, even though most follow the same formula in each book.  It works!  In this book, there is a robbery at a charity event and her friend's niece is killed during the robbery.

Of course, Theodosia is there and has to help solve it and yes it sounds like a lot of her other plots.  But it is still a fun read and the tea room scenes alone are worth the read.  As usual, there are yummy tea time recipes in the back.  Since her newest book just came out, this book is now available in paperback. 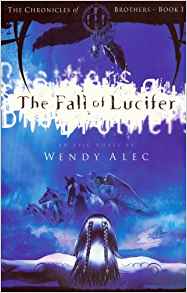 Wendy Alec's books require a little explanation.  I think most people will either love them or hate them.  I read all of the first book and part of the second and I liked them.  However, I like fantasy novels.  My husband (the former engineer who is quite logical) read the first book and didn't like it enough to continue in the series.

These books shown are the first two of the Chronicles of Brothers series.  There are four books already written and the fifth book (so I have heard) is in the works.  There is also either a movie or a mini series based on the books in the works.

It is hard to describe them, a combination of End Times novels and historical fiction about Gabriel, Michael, and Lucifer (who became known as Satan among other names).  The first book, The Fall of Lucifer, takes one back to the time before the creation of the Earth and mankind, the Fall of man, and the author speculations on why Lucifer came to hate the created Man and it caused him to turn against God.

This was Wendy's first work of fiction and honestly not the best.  Like many first time novels, it is choppy to read.  However, it is the foundation book of the series and if you can get through the choppy writing and way too many pages of description, it is a decent read.  There was too much speculation for my husband to enjoy it, even though I kept reminding him it is a work of fiction. 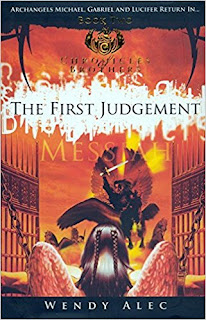 The second book, Messiah: The First Judgment, is far easier and more enjoyable to read.  On Amazon reviews, I read that many people thought each book in the series became better.  This one is mostly about the birth of Jesus and what is going on in Heaven during this time and on Earth.  I wrote a friend during this time that I stopped reading and left Jesus, Mary, and Joseph on the way to Egypt in peril.  That was when my eyes were becoming infected and I still need to finish the rest of the book.

These books also include three modern day brothers, one of whom becomes the Antichrist in the Tribulation.  You don't read much about them in the first two books but they are front and center later.  If you like such books, you will love these.  If you don't... you won't like these at all.  I plan to read the other two in the series following these.  I don't think very often about the angelic world and these books remind me there is more to what is happening around us than what we can see. 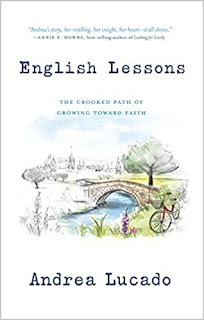 I have not been accepting review books with my eyes rather wonky.  I mean, a publisher does expect you to review them on the publication date whether you can read them or not.  English Lessons was the first new book I agreed to review since Christmas.  It sounded too interesting to pass up.

The book, written by Andrea Lucado (yes, that Lucado), is about her leaving home and studying at Oxford in England.  While there, she shares her struggle with a "changing faith and an unchanging God".  I will begin reading it soon but I won't review it here until its' publication date, which I think is May 2nd.

Books Mentioned in this Post
From My Heart to Yours... here.
Devonshire Scream... here.
The Fall of Lucifer... here.
Messiah: The First Judgement... here.
English Lessons... here. (Pre-order only)

The other two books in the Chronicles of Brothers series are:
Son of Perdition... here.
Pale Horse... here.

Disclaimer:  Most links to Amazon.com are Associate Links.
Posted by Brenda@CoffeeTeaBooks at 1:54 PM

Dear Brenda Could you answer this question? If you click on the Amazon link to the book{s) you are writing about and purchase the book, do you receive credit or do you have to use the widget?

I receive credit from the links, too. I set them up through the Associate's website so my Associate's code is embedded in the link.

Something happened...I may have followed a link and become distracted. We may not always enjoy the same genres, but I always enjoy reading your reviews. They almost make me wish that I did like endtimes fiction based on fact or allegory or whatever it is. My son does.

I thought I had read that Laura Childs book, but I haven't. I always wait until they are in paperback! I'll have to get this one.


Those end times books sound interesting, and if I had more time for reading I might check them out, but I am barely getting to the books I already have in my stack.