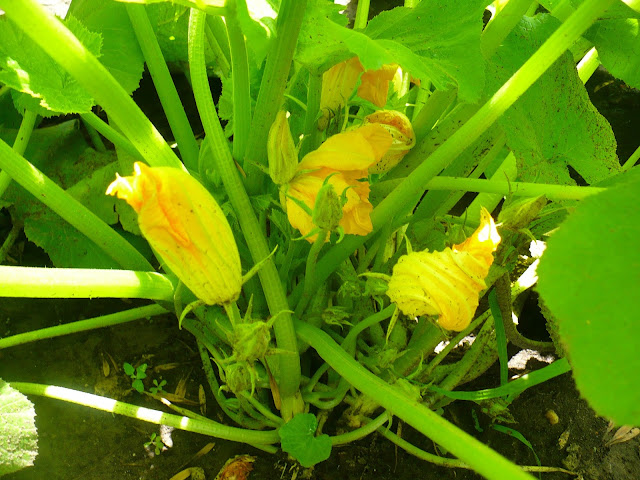 The heat index today is to be over 100 so I was out early watering the garden and picking the first green beans of the season.  That is always a red letter day here as they are the favorite food we grow.  I gave up on most tomatoes, unless we chop a tree down near the garden there won't be enough direct sunshine.  However, cherry tomatoes grow fine and I'm just waiting for some to ripen next week... maybe.

I'm so very thankful I was able to stock the freezer some a few weeks ago.  Meals have been creative but chicken makes everything easier.  I thought it amusing that while watching The Last Alaskans, they continuously talk about the need for meat to survive in Alaska.  There was not one vegetarian among them (on purpose at least).

The reason for us being so tight right now is the huge sodding project Hubby is currently working on.  He was given the wrong estimate and when he went to pay for the order, found out it was nearly $400 instead of $150 as he had been told.  The young woman who gave him the estimate had not included other charges.  He was given the option to back out of the order but the project was too important.

It has been a huge project but everything looks so much better and... even more important for him... it will make maintenance easier.  The forest has been trying to take back the area next to one side of the house and it was winning each year.  The only way to give it a permanent fix was to take every good plant, bush, unwelcome seedling, and equally unwelcome weed and dig them all out... replacing with thick sod over all.

He used the extra sod from the project to place around trees that had bare spots from not getting enough sunlight.  Over the past few years, he has been cutting lower branches to get more sunlight on the ground.

The Spring project this year was the rebuilding of half the raised beds and laying garden fabric between the raised bed rows before layering pea gravel on top of it.  Last year it was putting a new chicken wire fence around the garden.  Last Fall he built a double composting unit.  We are hoping next Spring to be able to add more raised beds to grow more of our own food.

Each season we have planned and budgeted for the most important project at that time.  Sometimes it made for planting late and it would have been nice to have the compost unit a couple months earlier... but one does what they can, with what they have, and when energy permits.  There is no option of not doing anything at all.

I already have a list of garden items I need to look for if they go on clearance in August to be ready for next Spring and this month's Amazon credit was partially used for garden supplies (for which I thank everyone who enters their Amazon shopping or purchases Amazon Gift Cards through the widgets and links!).

The garden is an important part of our pantry for in season it provides organic veggies... and talk about local, you don't get more local than your back yard (unless it is walking out to the deck for what is growing there).  ;)

Not to mention that my doctor says it is great exercise and working outside provides a natural source of Vitamin D as well as healthy food!
Posted by Brenda@CoffeeTeaBooks at 11:30 AM

We did much less this year. I have a zucchini in a planter on the deck and two volunteer tomato plants! Everything else we buy from our local produce stand. It was too much to try a bigger garden with Tim just starting his business.

We do what we can - I like that saying!

Ps I'm having trouble publishing this comment so if you get a lot from me, I'm sorry!

Wow! Those kinds of estimates are shocking! Good for the heart, depending on how one looks at them. I have not done as much at home this year as I had planned. As you say, we do what we can. I bet your yard is looking really fine with all the new sod and the taking back of the lawn.

Wow! That does sound like a huge project! But your yard will look so much nicer, correct?

Wow that guesstimate was a little off....goodness sakes.

Next year I will have a stellar crop of asparagus...I think all 40 roots took. The FFA at the high school was selling stray last fall and I was able to get several bales to help mulch the area.

I need to move the rhubarb and the walking onions. Not quite the right spot, a little hot and dry. The tomatoes I grew from seed look really healthy....only five peppers plants of the twelve made it. I can't grow peppers to save myself in this soil. Three plantings of Contender green beans are moving along nicely...I'm probably close to two weeks for the first picking....being I'm "up north". lol.

The pool project seems to be successful. I've never had beets and carrots look so nice. The cucumber and zucchini plants are lovely....8 zukes on two plants ....in Walmart bags. The green onions are a bit slow, but the radishes are over crowded. I was a little exuberant with the seed. I think next year I'll try the pepper plants in a pool.

Of course, blue kiddie pools with Walmart bags in the yard do look a bit tacky. My neighbor keeps looking at them a little perplexed.

Those 'surprise' additions to the budget are rough! I'm sorry the project ended up costing you more!

Do you save all year long for these projects? We often spend near $200 a year on garden improvements and it always sets me back. I need to find a way to take money out each month throughout the year.

I hope you are feeling well!

My sister and I were having a laugh about how people seem so worried that we humans will kill off all of nature , when we spend ever bit of our energy fighting a loosing battle in our own backyards !! She has 4 acres , and decided to let the back "go natural" . 3 years later she has 8 foot razor wire blackberries and poison ivy thicket, advancing several feet every summer ! Ours is never ending trying to keep our "hedgerows" from advancing across our corn and bean fields !! Good luck with the war in your yard , wish the garden plants had similar strength !!!Karen Jones