Is it cold or what?  At least here in the Midwest of the USA.  Which reminds me, I got a bit of a chuckle from one of our Australian friends commenting on a Michigan reader (I think that was the state where she lives) who was amazed at their fresh figs.

I live in that part of the middle of the country and I must say, I have never seen a fresh fig outside of a grocery store, either.  The reason?  They would down right freeze their giblets in our winters!  So where do they grow?  California I know but there has to be other warm states where they are grown.  I see the California fig commercials for them once in awhile.

Michigan is famous for growing some of the best fruit and veggies in the country.  As for my specific part of the world... we grow corn.  And soybeans.  And deer.

So what is going on in my world during this Arctic blast?  Other than being thankful the van starts and no pipes froze?  Well, this... 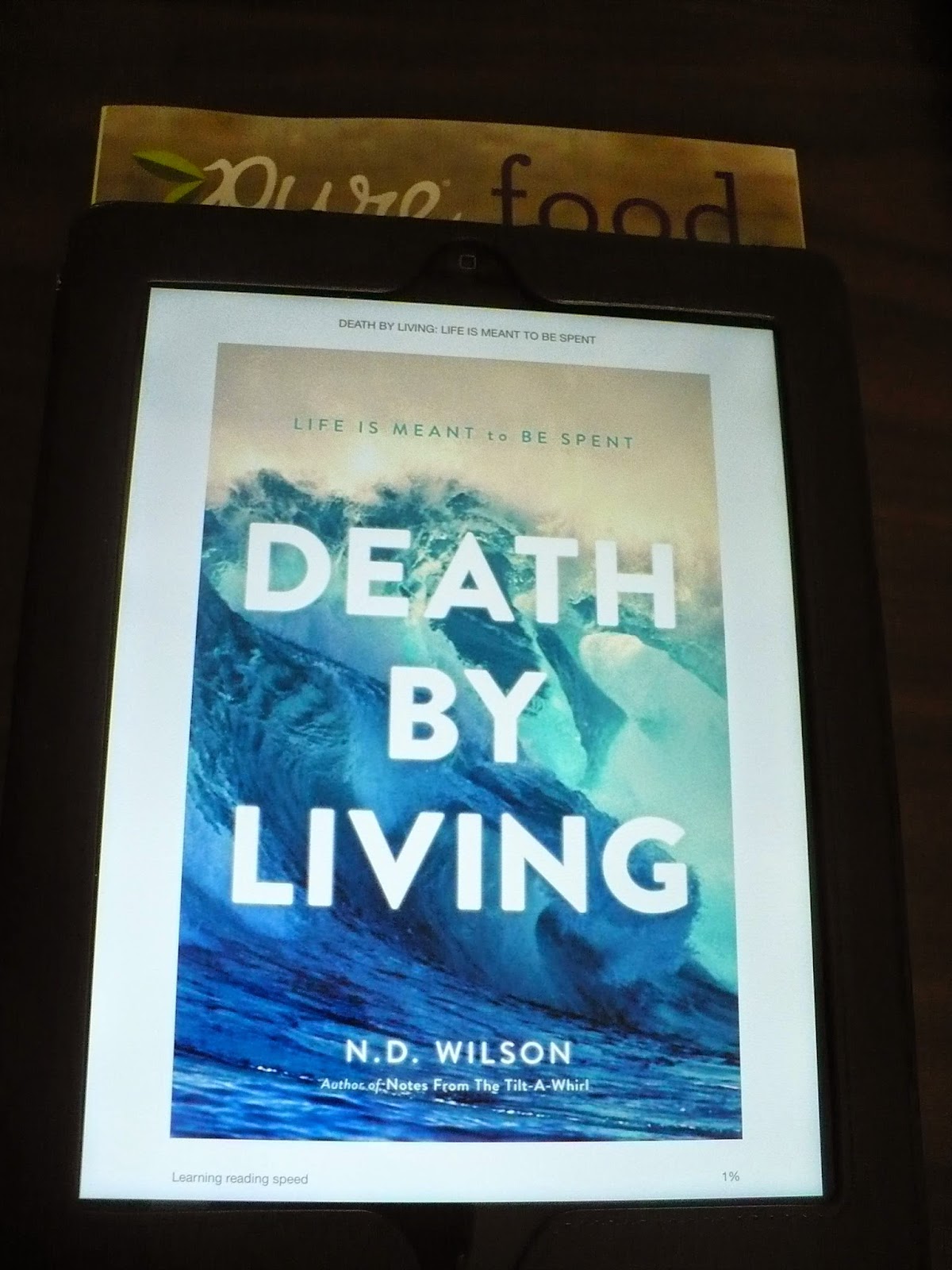 The bottom book, the one where the top of it is peeking out... it is what I am reading and cooking from for review.  More about it (hopefully) on Friday.

I'm reading N. D. Wilson's Death By Living on the Kindle, purchased when it was on sale and after seeing it quoted quite often by many writers I respect.  It is a wonderful read.  Better known for his works of fiction for young people, he uses the same style in his nonfiction... which offers some really good theological thinking in a topsy turvey roller coaster perhaps one needs Dramamine while reading kind of way.

More info on it is... here. This book is one I can read through and them come back to over and over.  Read it if you want to be inspired.  But be prepared for the loopity loops.  Which you will understand if you have read his fiction I am told. 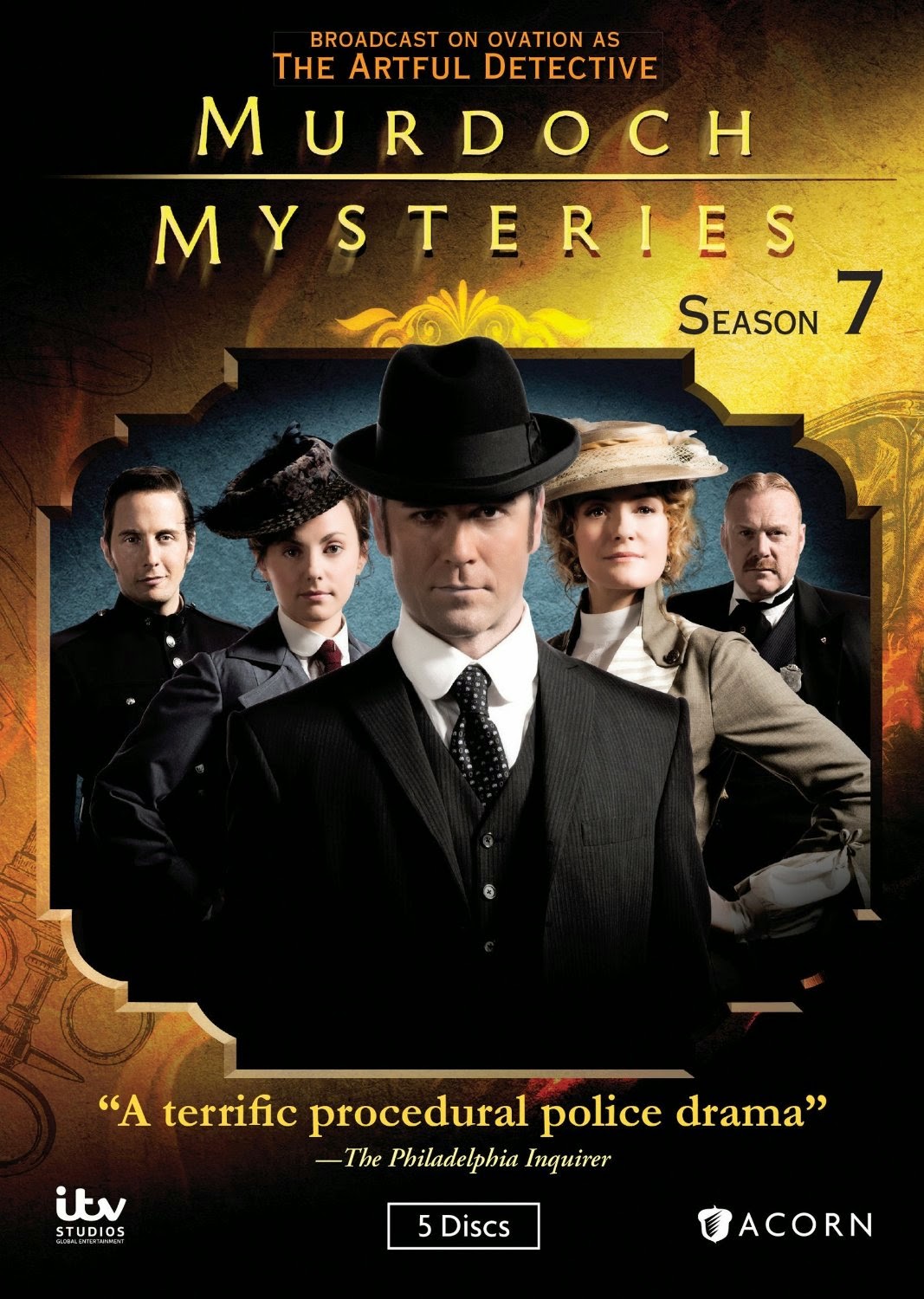 I admit to becoming obsessed with Murdoch Mysteries, which is called The Artful Detective here in the States.  It is shown on the Ovation Channel for those receiving cable or satellite TV.

I must warn just a little that it is a Canadian TV show.  Which makes it almost British... or similar to British TV rules.  And for those of us who absolutely adore BBC shows, you will know they are more lax on some things than we are in the gold ole USA in prime time (not at all otherwise!).

One episode had nude backsides showing (Murdock AuNatural... or something to that affect).  But they are known to limit the amount of blood and gore on their TV shows, so their murder victims certainly look less gross than CSI.

The actors performances are wonderful.  I adore Murdock but want to slap his feminist lady friend at times (who becomes his wife in the new season, which is new here but old news in Canada).  But then I have to stop and think what it would have been like to be a woman in turn of the century (last century obviously) Canada or the United States.  Then I give her some slack.  Mostly.  Kind of. 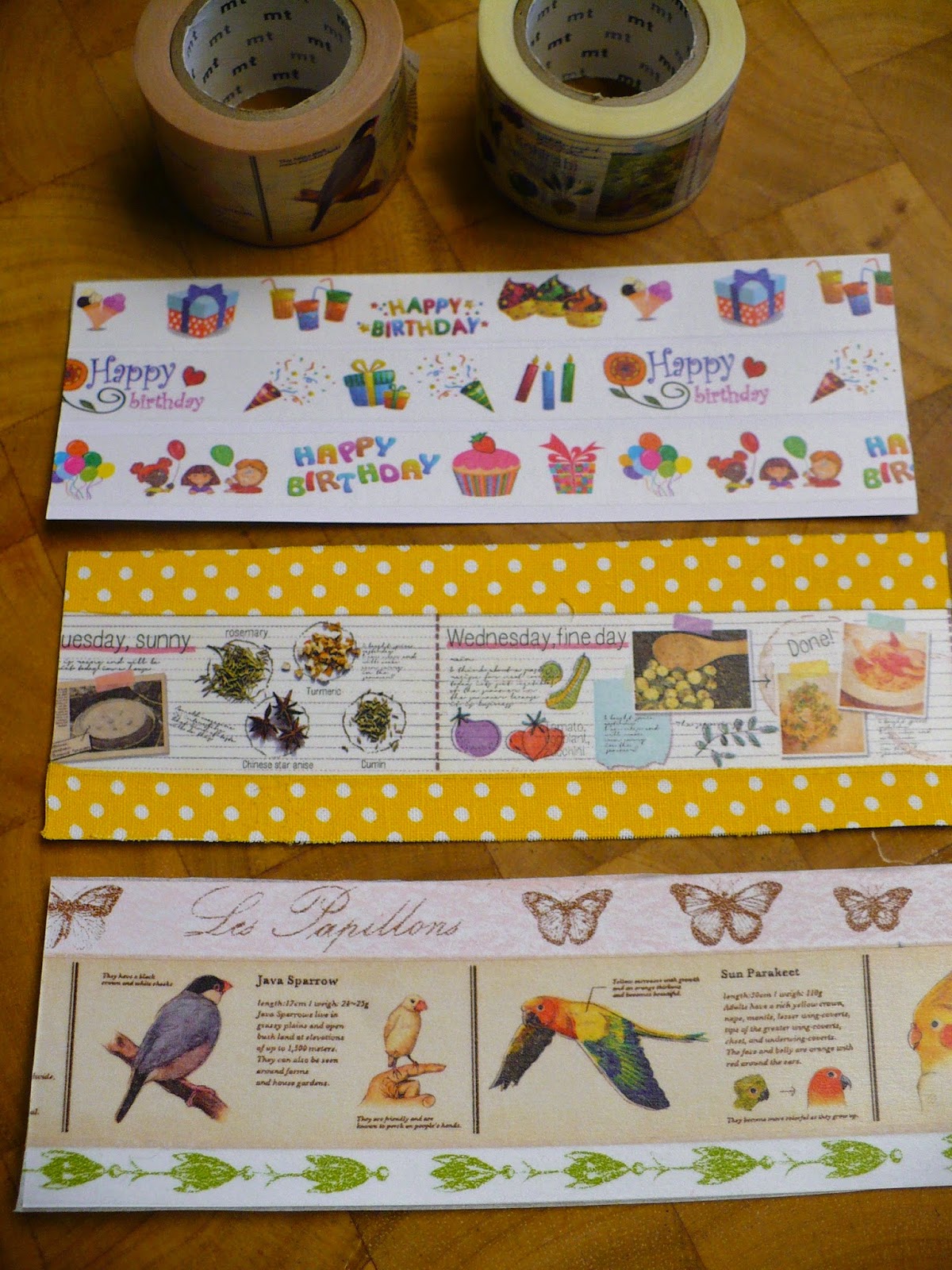 I bought a package of blank bookmarks for about $1.99 at the store and I've been playing with them and washi tape ever since.  Here are a few I made last week.

I should have taken a photo of the animal print card and bookmark I made for my granddaughter's birthday.  I always forget to take photos of cards, especially.  Perhaps that will be my next project to show... next week?  Specifics on most of the washi tape is offered below.  The polka dot tape is available just about anywhere they sell washi tape, that may have been purchased at Walmart where they have a tiny selection. 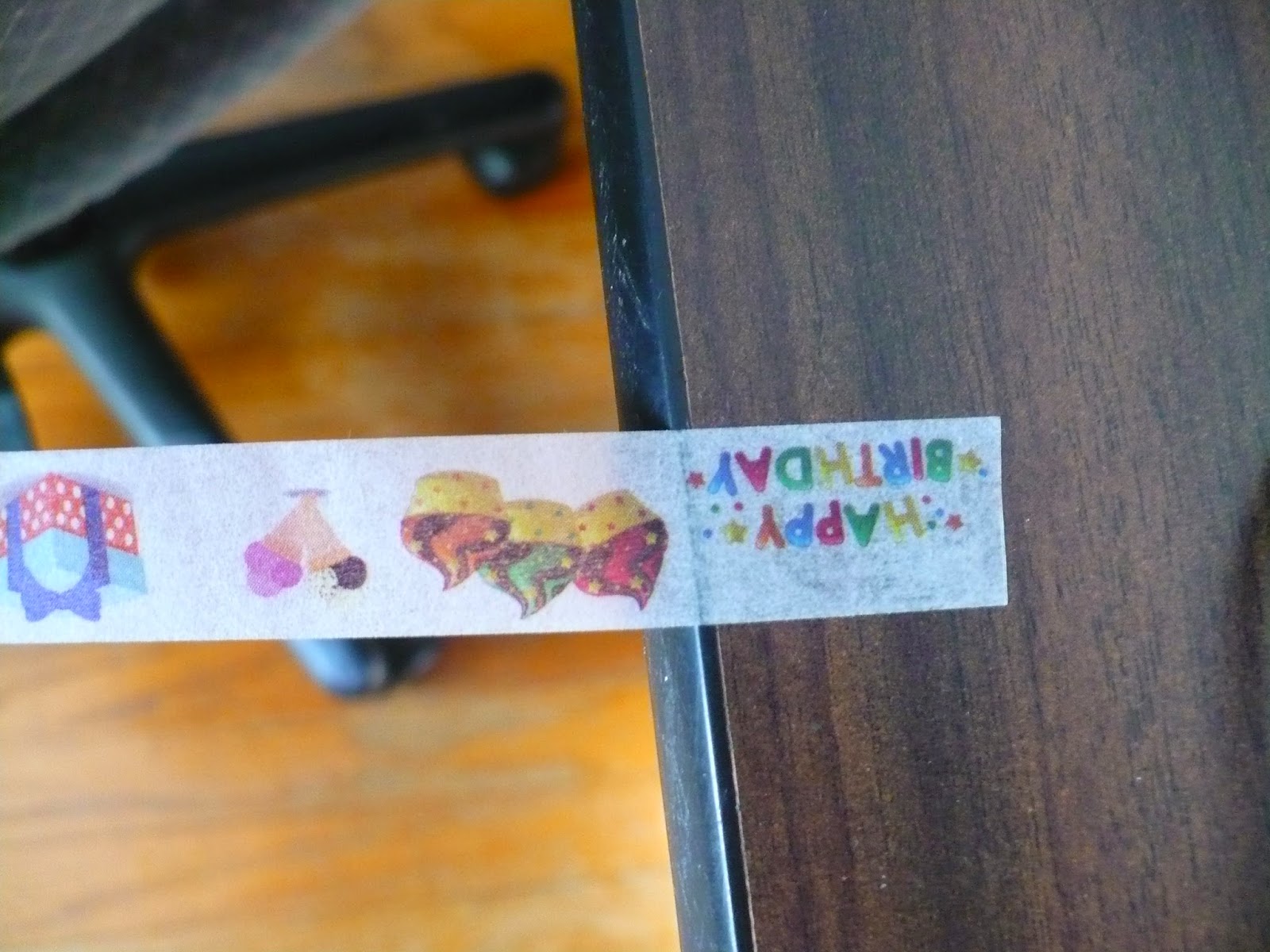 I thought I'd also share the way I have learned to keep paper washi tape from tearing... and true, original washi tape is a masking tape product.  I have learned to press one little section of it on a table and then slowly roll it toward me.  I cut it just a tad bit longer than I plan to use, carefully holding on to the end I am cutting off.

That has worked very well to prevent wonky washi tape.  Which is very frustrating and almost makes you give up... almost.  Hopefully my solution will help another washi tape fanatic crafter? 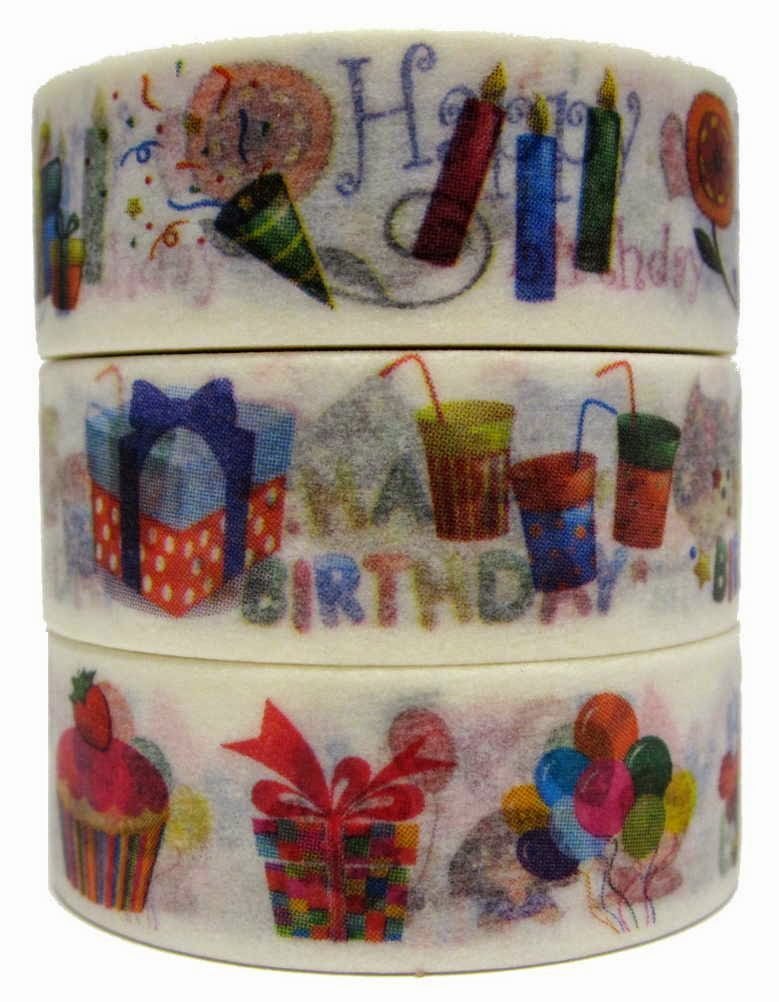 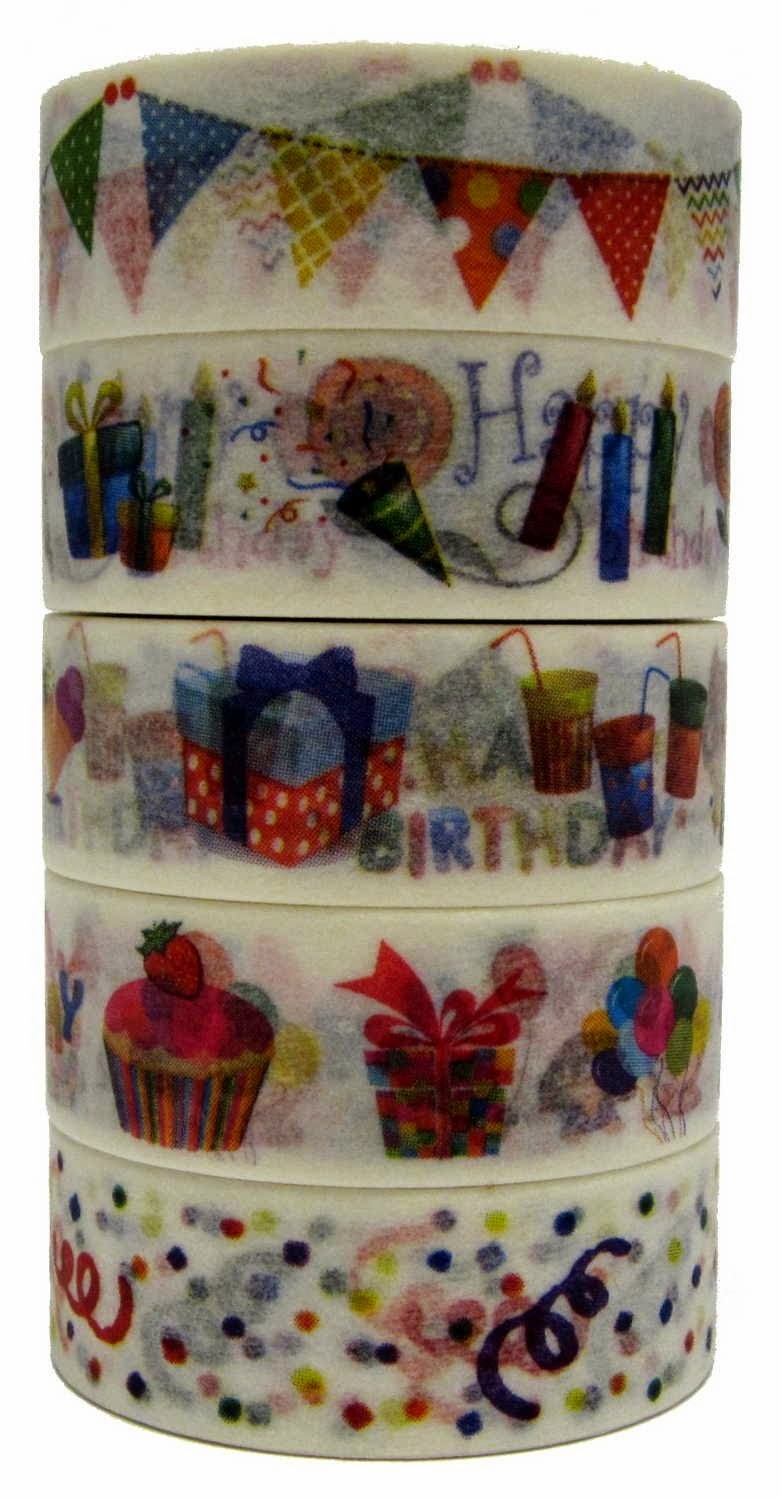 So many readers asked about the washi tape I was using, I thought I'd add links to those I purchased from Amazon with credit (for which I thank you, I bought Art stuff instead of books the last couple of months!).  I ordered the washi tape I'm sharing photos of today as I can't find anything like them where I live.

I absolutely adore this Japanese washi tape.  I purchased the smaller pack... here.  It is also available in a larger pack, as shown on the bottom photo above... here.  It is one of those rare tapes that has a white background and the colors show up beautifully.  It would make lovely birthday cards. 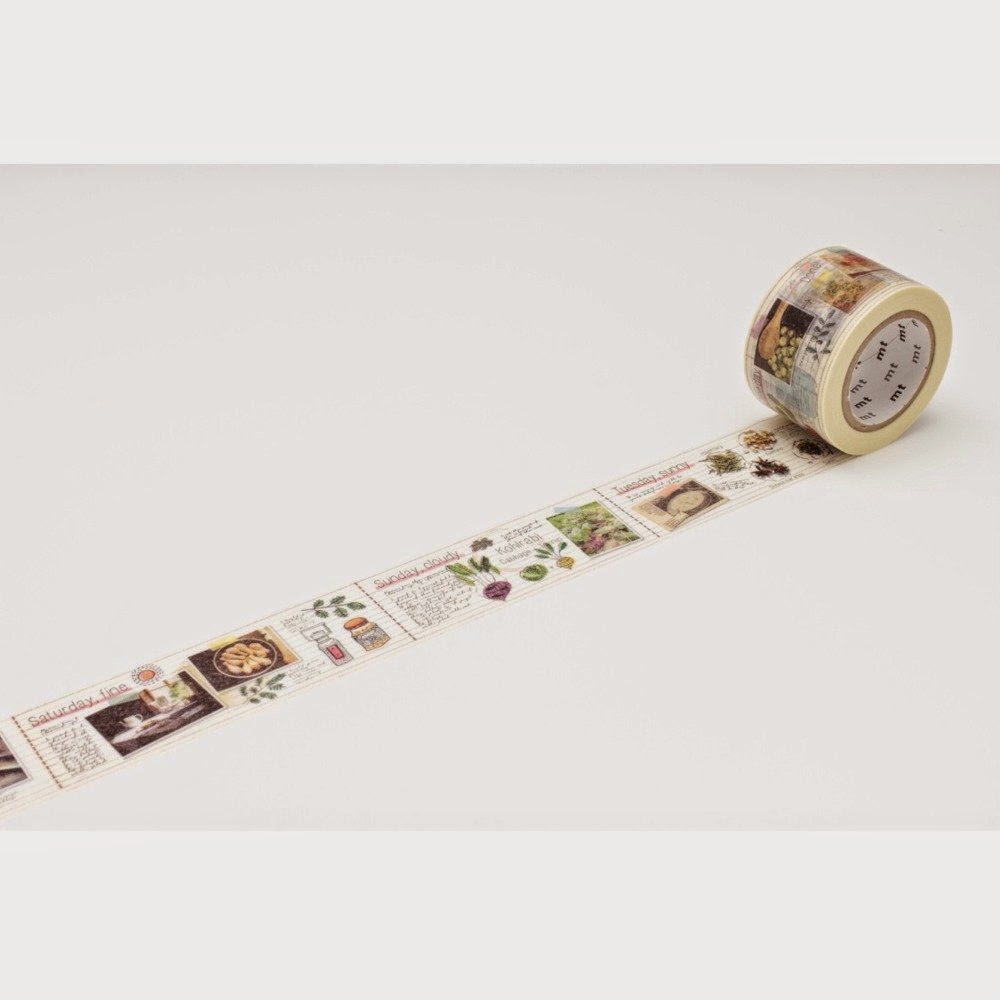 This is the most amazingly beautiful washi tape.  It is all food and garden related.  Plus it is that wider tape I've come to enjoy using.  More info on it is found... here.  It also has a whiter than usual background, which make the photos show up nicely.  My eyesight is not good enough to read the prose... sigh.  But that does not make it less lovely. 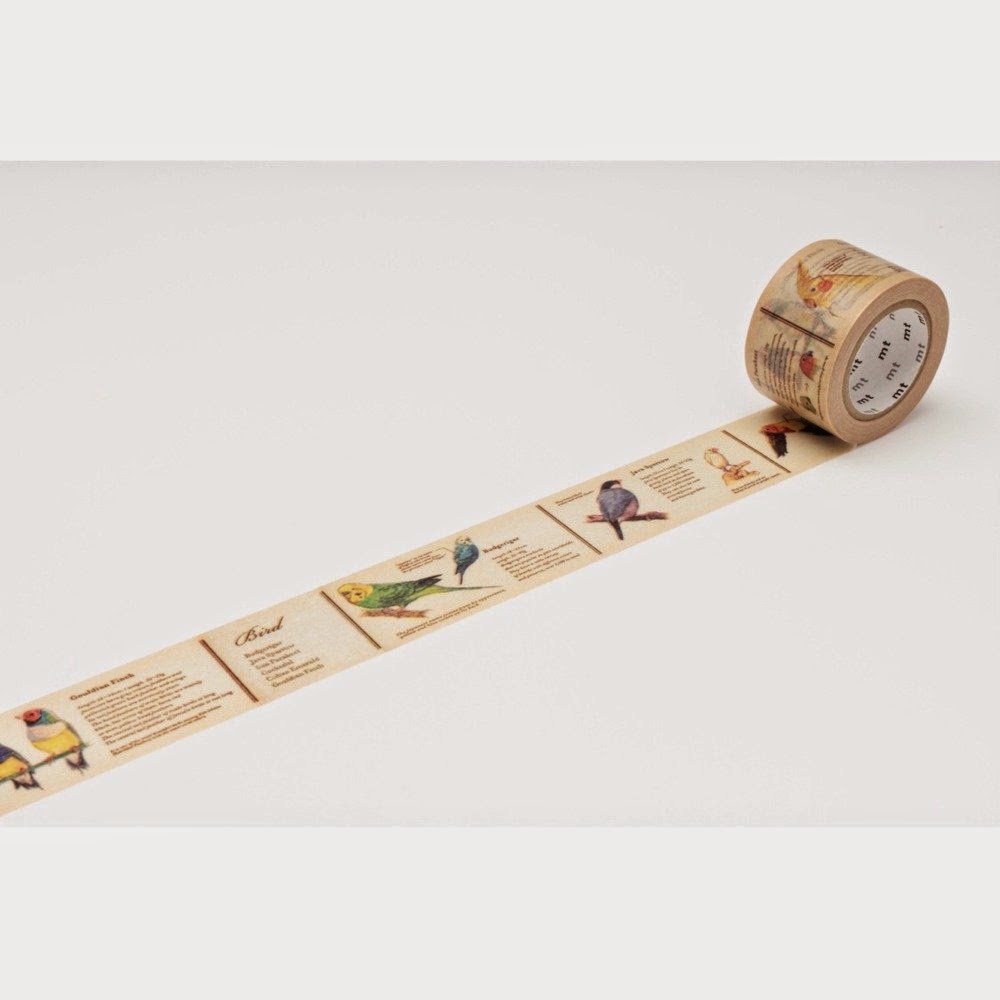 This wide washi tape has the appearance of vintage bird books.  Amazing.  If you follow the link and then click on one of the photos on the Amazon page, it shows how someone used this tape on the front of a book!  You can view it... here. 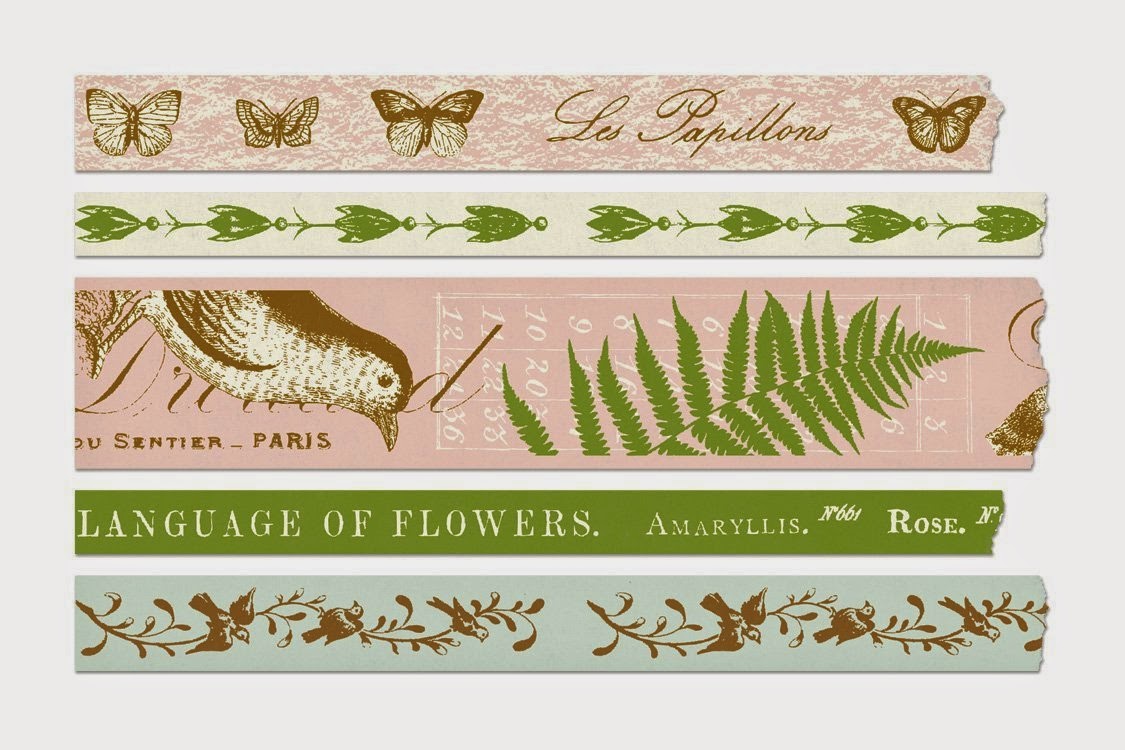 One of the bookmarks had two of the above washi tapes on it, too.  I've already shown you a photo of the container this comes in but the above photo from the Amazon page details more specifics.  Other than their Christmas version, this has been my most used washi tape so far.  Further info... here. 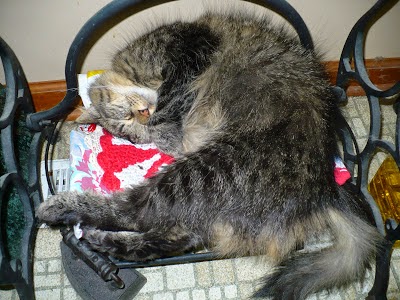 I found this one when scanning some old photos and I had to show it again.  She will take a nap just about anywhere.  There are objects in this area now so she can no longer nap there.  But don't worry.  She has plenty of other places.

Our former kitties, Sasha and Storm, had only a couple of places they slept and usually on the back of the family room sofa. As for this one?  Who knows where we will find her.

Note:  All links to Amazon.com are Associate links.  Which means... if you make a purchase after clicking on a link - or- if you enter Amazon.com through the widget on the sidebar (even if you do not purchase what you clicked on), then I receive a tiny fraction of what you purchase.  It costs neither of us anything (well, for me it costs the time and effort to put in the links but it is worth it!).  It all adds up so no purchase is too small and I so appreciate the big stuff!
Posted by Brenda@CoffeeTeaBooks at 12:11 PM

I love all your new little decorating "tweaks"! I also love that you've found a new craft medium to explore and work with. Your washi tape creations are pretty!

Figs grow well here in SC. I think they like our acidic soil. It took me a while to find a way to use them but I have finally found a really good Orange Fig Jam recipe to utilize them. We have trouble growing zucchini here--my husband says it's because we have every insect and plant disease known to man. :) We have watched some of the Murdoch Mysteries on Roku. Right now we are enjoying some of the old Poirot mysteries. Enjoyed reading about your week. Stay warm!

I love your coffee pot! We havevfig trees here in Florida they have the figs on them in the summer and are delicious eaten right off the tree! I also make fig preserves and strawberry fig jam!

I'll try to remember to use your Amazon widget next time we order from Amazon. Living out in the boondocks, we order from Amazon once a month. I have a serving for twelve of Friendly Village, also. A few years back I purchased a large shipping box of it for $45! It even had a teapot. We grow a lot of deer in Michigan also. Our county sheriff says that if you live in Huron County, you are going to hit at least one deer, or rather, they are going to hit you!

So ready for spring! Your kitty is beautiful too!
I have watched some of the Murdoch mysteries on netflix. My favorite was the one with Tesla although I don't think I have watched past the first season. So Murdoch and Julia get married...

Sometimes, visiting here, I think that I need Washi tape. =D Oh I am such a prude and can not handle nudity nor realistic-looking dead bodies. The most provocative BBC program I can handle is Father Brown.

Hello from another frozen Midwesterner. Love your blog.

We like Murdoch, too. Some episodes we have been careful with. I agree with you regarding his wife, my girls and I were happy when she went to the states. We liked the English gal.

Your Friendly Village pot is so nice! What a great find!

Brenda, glad you had a chuckle about the fig comment. LOL! We have lots of fig trees here in our part of Australia which is a cool temperate region. Usually though hubby eats them before they reach the kitchen so I rarely cook with them. :-)

LOL! Her Fluffiness is quite amazing! So adorable.

Figs grow in Georgia - at least they sell fig trees. Our winters are getting colder and colder so I'm sure fig trees would need to be protected to not get damaged.

That washi tape is amazing! Really lovely as are you decorating tweaks!

I always enjoy pics of your home and what you are reading, crafting, and doing. The only figs I've ever eaten were in fig nutons (I don't think that is spelled right). We too have lots of deer in our country - certain times of the year they bunch up into a herd of 40 - 60. Drive carefully!!!
Pam (SD)

I LOVED Death by Living. It was great. (I'm a big fan of the Wilsons in general.)

Love your $7 tea set. It is indeed very spring-like! Beautiful!

You never cease to amaze me. You are so creative with not only food and writing,but decor also. You are such an inspiration!