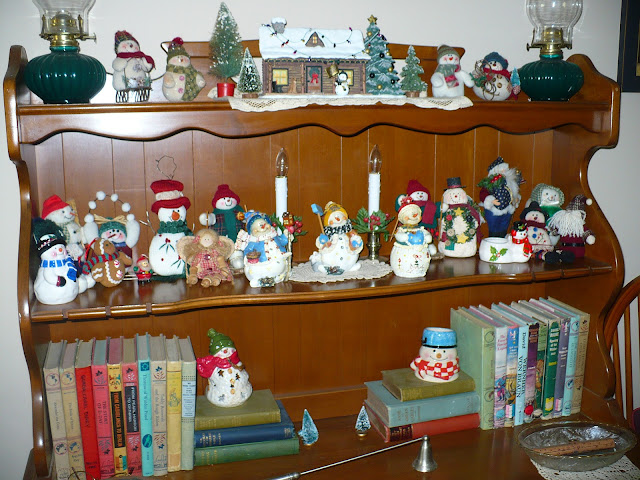 Saying hello in the midst of Holiday busy-ness here at home.  I hadn't done any baking this year until yesterday when I made orange cranberry quick bread in mini loaves.  Part of it went into the freezer and the rest into a gift bag for my husband to take to a friend of ours.

Next week I plan to make some candy and except for our Christmas Eve meal (when the newlyweds will be here to celebrate Christmas), I won't be spending a lot of time with Christmas cooking and baking.

We just don't have the social commitments we once did when we had kids at home.  Most of our friends are like us with dietary concerns.  Hmmm... that can't mean we are getting older I hope!  ;)

We are also anticipating Christopher's college graduation.  It seems impossible that it is finally upon us as it had to be only yesterday he was entering the Community College to take classes while homeschooling to prepare for college admittance.

He will officially be a computer scientist!  I plan to soon write a (much promised) post about homeschooling.  I have written a few but I was asked to write how we combined Charlotte Mason with unschooling.

He has already been hired by the high tech firm he's been working for part-time in college as a software engineer.  It is one of those private firms that is also associated with the University.  Of course, we are happy he will be able to stay close to home for now.

Now, to important subjects like books and movies and comments.  I still haven't had a chance to watch the Ballykissangel DVD series.  Since it will soon be due at the library, I plan to watch at least the first couple episodes soon.

I know you can't always tell how a show will end up with just the first few episodes but I'm hoping it will be different with this series.  My very favorite British comedy series is Last of the Summer Wine, which still holds the record for the longest running sitcom in the world... from the early 1970s through 2010.

However, when I went back and watched the first few seasons, it wasn't nearly as good as it later became.   I especially enjoyed the episodes from the 1980s through 1999 (which is when the actor who played Compo passed away in real life).  Not that the later episodes weren't enjoyable, there was just a special "magic" he brought to the show as the straggly character who was infatuated with the frumpy Nora Batty!

While I love re-reading No Holly for Miss Quinn, I was a little confused the first time I read it.  It seemed to be going in one direction and then completely went in another.  Now that I know what to expect, I love it!   I also find the storylines of The Christmas Mouse and Village Christmas so charming, "Miss Read" has a way of letting us see ourselves in these stories, as does any good author.

I was VERY fortunate to get an inexpensive copy of Goudge's Sister of the Angels.  I'd had it on my Amazon Wish List for ages and kept an eye for it to be cheap (at the same time my credit came in).  Speaking of which, thank all of you AGAIN who enter their Amazon shopping through my widget!

If you can find a copy of Henrietta's House, it is wonderful, too.  It is a fantasy novel about Henrietta and the other wonderful characters from A City of Bells.  It has the feeling of an English fairy tale.

Stephanie liked I Saw Three Ships and I do plan to read it soon. The one time I was going to order it, Amazon had sold out.   I've added Alcott's Christmas Treasury to my list to check out of the library.

Regarding Her Highness... I think what attracts Victoria to a TV show first is the sound and then she runs to the screen whenever she sees a bird, cat, or critter.  :)

Oh, before I forget... one more thing about a TV show!  Some of you loved the You Tube videos of the British show Little Paris Kitchen (talk about an International show!).  It is now showing on The Cooking Channel (my very favorite TV channel) in the USA.

We mainly budget for Direct TV so my husband can keep up with Chicago sports and it is the only luxury he allows himself.  I admit...  even though I say I could live without it, I'd miss The Cooking Channel.

It comes on Saturday afternoon and then is rerun on Fridays.  You'd have to check your local times.  I love being able to watch it on a bigger screen.

Now I must shut off the computer as the dishes have been soaking in hot, sudsy water and I must get them done before they take over the kitchen.  I have a small kitchen (but not as small as the Little Paris Kitchen!).  :)
Posted by Brenda@CoffeeTeaBooks at 12:32 PM

Great Brenda!!! I love your book recommendations and have to thank you for the scoop on the British shows. Ballykissangel has me intrigued and its available on Netflix too!
I get the biggest kick out of Victoria's TV viewing! One of our cats from years ago watched TV all the time...he especially liked the nature documentaries. Like your little princess, he was attracted to the sound first and then would sit on the bed mesmerized with the activity on the screen. He was vey smart too...taught himself how to use the potty...not an exaggeration at all! One night I heard tinkling from the bathroom and thought it was one of the kids. Went in to check and found our kitty on the seat doing his business! Soo don't be surprised if Victoria surprises you one day!;).
Love,
Tracey
XoX

I love the Miss Read books, also books by Jan Karon. Thank-you for sharing the other titles. i'd like to check those out. It's great to find good books!

I like Little Paris Kitchen! We don't get any television, so I just watch it on the computer when I am able to find the time!

I've also not had time to read much, which makes it slow going through a few books but I am plugging along!

So excited for Christopher! What a great achievement for you all!

Last of the Summer Wine is also my favorite show. I agree with you that the early episodes are not as good as the others. Nora and Ivy yelled too much, etc. My favorites are the episodes featuring Seymour. How can you not love him?

I love your snowman display. How very pretty! Thank you for sharing your lives with us. I think we are long lost twin sisters as so much you write about I could write the exact same! :-)

MY two dogs watch tv too. Nature shows, Cesar Millan's series and oddly enough, PBS animated childrens' programs. (I keep telling my husband that they are trying to learn to read).D/NY