Today is sunny but most of the past week we had days upon days of cold drizzle that (to me) felt much colder than snow.   So... while the weather remained frightful, inside it was delightful.  :)

The Christmas tree remained lit all day, many hot beverages were consumed, soup was made twice and bread baked once, and a cat could be found cuddled on my lap to keep warm on many evenings. 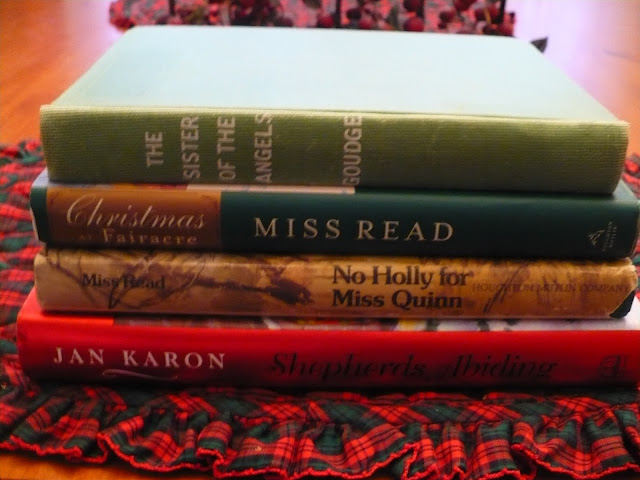 So far I have finished re-reading No Holly for Miss Quinn, Village Christmas, and The Christmas Mouse by Miss Read.  I found Goudge's Christmas novel called Sister of the Angels (a sequel to the lovely City of Bells) was even more enjoyable as a re-read.

Shepherds Abiding has just been removed from the shelf and now resides on the To Be Read Soon space on the coffee table... a space which can become quite jumbled at times. 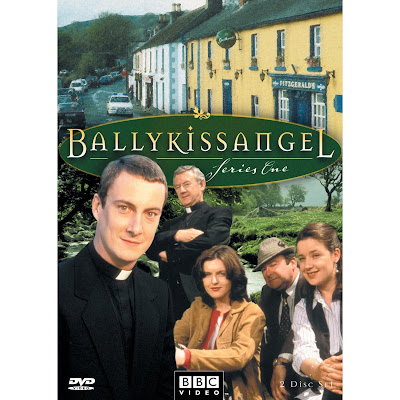 One of the Holiday Specials on the splendid BBC Holiday DVD set was from the Ballykissangel series, which is a 1990s show set in Ireland.  I checked the library near campus and indeed... they have the first three seasons! 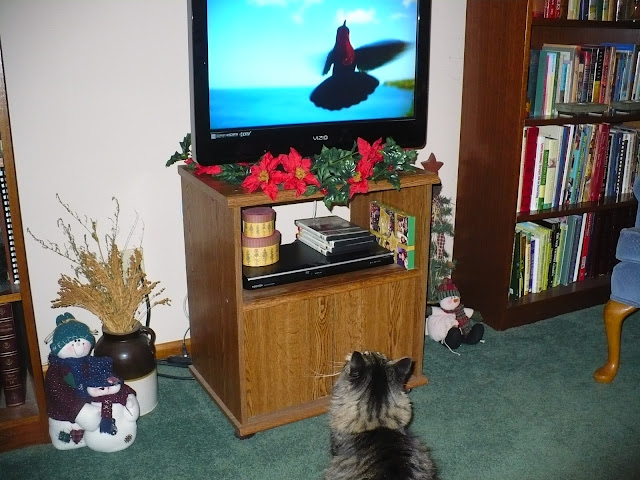 I'm sensing a serious feline television addiction.  My memory card shows there have been many  "cat watching TV" pictures lately!  ;)
Posted by Brenda@CoffeeTeaBooks at 9:59 AM

The Christmas Mouse is a favorite of mine, but No Holly For Miss Quinn turned out to be a big disappointment.

I do so enjoy your blog. Lovely photos and lovely writing. Unfortunately, my computer doesn't care much for it. Takes forever for it to come up/upload/download, whatever the term is.

Blessings to you and your family. Please give Victoria a love for me. Wait until she finishes watching tv.

I have read (but not owned) all of those books, but my favorite is the Goudge one. Must get my own copy some day! I do own a few other Miss Read books. I recently bought 3 at a library used book sale for 50 cents each! That means I now have 11 Miss Read stories to read whenever I please. I own a few Goudge books too. Lovely, cosy reads all!

You were lucky indeed to find that copy of Sister of the Angels....!!! Will see if our library has that Irish series. Have an email written in my head but no time to type yet. :) Sunshine today! so nice!

Oh she's so cute! Sometimes they just need a diversion.

I must put a bug in someone's ear about the tea pot. I meant to get it all year long and didn't. Sigh.

Took Shepherd's Abiding from the shelf just two nights ago. I had looked all over...if it had been a bear. Anyway, I'm settling down the Mitford and the quirkiest characters ever. (I have an entire other set of them right in my own hometown.)

Lovely photos...yours is such a charming corner of Blogdom!

I put both Goudge titles on hold! I've been meaning to read City of Bells and now to find out there is a SEQUEL also! That pushed me over the edge even though I have a HUGE pile of books on my reading stack. :)

I started reading Shepherd's Abiding as a read aloud for my kids - they love the Focus on the Family's Radio Drama Mitford....so I knew they would know the characters, but it is not easy for one of them to follow when it switches from something Father Tim is doing to one of Hope's letters. I am just going to finish it for my self!

I love Ballykissangel. The beautiful scenery is an added bonus! Merry Christmas! - Taryn

Brenda, you really MUST add Louisa May Alcott's Christmas Treasury to your holiday reading! (I mentioned it last year as well). I promise you won't be disappointed. They are such sweet stories! My children and I are really enjoying them at read aloud time this year (along with Elizabeth Goudge's "I Saw Three Ships"). -Joy

Hi Brenda, thanks for the inspiration, love the picture of the teapot and the books, actually everything, all warm and cozy. It bet the cat is fascinated with that particular program because of the birds. Thanks for all that you share here. Have a blessed Christmas. ~ Abby

She's so cute watching the tv! Love the teapot and cup. I watched a few episodes of Ballykissangel but somehow it never captured my interest. I also never really got into The Vicar of Dibley and I LoVE Dawn French!