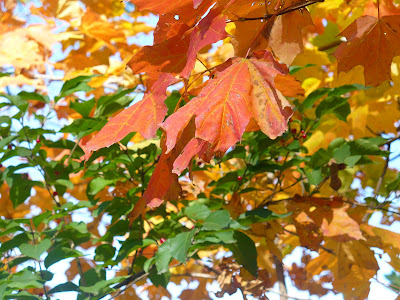 "I believe every life has hidden songs that hang
by twin threads of music and memory...
I believe they run between the rocks
and along the creekbeds of our lives.
These are songs that cannot be heard by anything but the soul."
Almost Heaven
Chris Fabry

The dishes were washed and drying in the red Rubbermaid drainer.  Saturday's lunch had been leftover homemade chicken soup from Friday night's supper, just what was needed in the damp chill that still hung in the air even though the rain was now in Western Ohio and Pennsylvania.

My soul was heavy... my feelings somewhat melancholic.   As I looked at the autumnal scene outside my kitchen window, I knew what I had to do.   I picked up my keys and my purse, stuffing a book in it to peruse while sipping a tall pumpkin spice latte (yum...).  Hubby was watching the University's football game on TV, he wouldn't miss me.

As I walked to the red van, something made me walk back in the house and pick up the itty bitty iPod from the table... just in case.  For those who do not live in or near a forest during peak colors, all I can say is my mortal body could hardly contain the praise and worship to the One who created all of this as the van made its' way through narrow country roads.

He didn't have to design trees in such a way that they show off the hues of red and gold and chartreuse and yellow as they are ready to fall back to the ground and die.   Just as He didn't have to give us chocolate... or coffee beans and pumpkins.  But He did because that is the way our God is, one who overwhelms in His Love.

When I pulled up to the Starbucks at the edge of town, the scenery had already made my decision easy.  I purchased a pumpkin spice to go and headed for my favorite place.  One I had neglected in the heat and humidity.

The van seemed to know where I wanted to go, happy to pull into the park's lot and finding a plethora of parking places... as it was chilly but I came prepared with a jacket and the itty bitty iPod.  For my walking companions were this and this and that.  Somehow songs such as Poor Sinner Dejected With Fear seemed just right on such a day.  :)

I was home again on the walking path as I passed through the forest and the prairie grasses and the swamp wetlands.  The scents of autumn are my favorites... the musky smell of the leaves returning to the earth (and I am so glad I am not allergic to leaf mold as is the rest of my family), the whiff of something in the air... not unlike my beloved Sweet Annie, another aroma rather clover-ish, the scent of the standing water in the forest, and then the surprising scent of... Christmas!

For amongst the trees looking somewhat like peacocks looking for a mate, there were a few adolescent pine trees which I would never have seen except their Holiday fragrance gave them away.  I stood near the wetland in the forest, breathing in the magic (Narnia magic, of course).

Actually, Narnia was on my mind already as I walked and thought how other worldly autumn days appear, especially when the rain has parted and what is left is a lovely golden light... as if God was showing off His stained glass window of leaves and golden prairie grasses and late autumn wild flowers.

But forests in autumn are not really stained glass windows and the abundance of trees standing stark and structural with no leaves at all reminded me how fleeting is the season.  Choosing to walk the path that afternoon was wise, even if my latte was cooling in the van as I walked.  Next week it will look completely different.

At one point in my walk, I stopped to get a closer view of the wildflowers... rubbing their leaves between my fingers as I was searching for the source of aromas.  I felt sorry for runners passing by at mock speed for their heart muscles were growing strong but not their heart.  How could one not stop and enjoy such abundance of color and scent?

I smiled once again as I admired the wildflowers for just as their cousins in spring, if they were growing in my yard they would be called weeds.  Suddenly it was as if God downloaded Truth to my spirit... are those things in my life I call weeds (trials?) really wildflowers picked lovingly by Him.  I must admit, I could not deny that Truth.

The music which has been the play list of my life this past year continued to play through the ear buds.  For it is the combination of hearing and seeing that makes the magic for me, it always has been when I walked.

Perhaps it is because when walking I don't let anything else distract from the words and the music, especially on this trail when one has no concerns about things with motors.  I wonder if we all have a songbook of our lives made up of songs we hear and heart songs we write as we walk the journey He gives.

I was reminded of the words under the above picture from the first chapter of Chris Fabry's Almost Heaven... and then more words from near the end of the book...

"The Lord gives us all a song to play, and at first we just play it the best we know how and try to work on it and make it better.  Most of the time it sounds awful.  But there comes a point where we realize it's not really our song to begin with, and if we'll follow the lead of the one who wrote the tune in the first place, we'll come out all right."

As I returned to the entrance of the walking path, I sat on my usual park bench and sipped the warm-ish pumpkin spice latte (still yummy).  My soul which had been heavy now had its' burdens lifted as He knew it would... for I am certain it was His still small voice that had me return for the itty bitty iPod.

I expect it was just me who coveted the latte.  :)
Posted by Brenda@CoffeeTeaBooks at 12:56 PM

This is a beautiful piece of writing, Brenda! Thank you for sharing your thoughts today.

This time of year is so glorious in its beauty. It truly takes my breath away. And it is a time to be aware of the gratitude that fills my heart, thanksgiving to the Creator of such amazing abundance.I'm so glad you took the time to slip away and be aware, and have a latte, too!

Maggie from Stillness at Cherith said...

Lovely =)
This time of year-my heart feels full, complete.
Glad you had a chance to enjoy it, and then share it here.

I kind of feel like I was walking WITH you...reaching down to rub the leaves of the wildflowers...sniffing that Christmas scent.

My heart muscles may not have been stretched, but my HEART has been :)

Loverly!! I took a long walk along a windy beach last week, taking a break to gather my thoughts and felt embraced by God. There's just something about getting out in nature and enjoying His creation that's refreshing to the heart and healing for the soul. Thanks for sharing!
Blessing,
Laura C.

Because of the day I enjoyed today, I could so well imagine yours. I don't know about that pumpkin latte being just your choice. Anyone I've ever head describe it usually mentions "divine." I'm glad that you had that time...now I must go back and see what exactly you were listening to on the i-pod.

I am agreeing with Marge...this is a beautiful piece of writing! Time away from the norm and the noise of the everyday, time spent with Him alone is always strengthening. Thinking about such a time this coming week...

And thanks so much for guest posting for me tomorrow! I am so delighted to have you visit!

"are those things in my life I call weeds really wildflowers picked lovingly by Him?"

And so glad for eye surgery that retains your sight for the beauty of such days.

So lovely - like a reader above, I felt like I was with you. I'm glad you shared this with us, and thank you for reminding us about the wildflowers in our own lives.

And now I believe I will go and have a pumpkin latte of my own today!

I remember the moment I realized that the things I grew up calling weeds were really plants - some good for medicine, some for food.

So many lessons from creation to learn about for our lives!

Thank you for your sweet comment on my MM post. I love this, and I love you, and I love your writing so cozily woven together with threads of beauty and love. You remind me of a grown-up Lucy... :)

What a delightful, magical treasured moment - complete with Pumpkin Spice Latte and all. I was going to leave a comment asking if y'all's weather was cool enough to enjoy one properly and then I saw this post!

Love and hugs to you,
your bloggy granddaughter.

P.S. I agree with Rebecca. I felt like I was walking with you in the woods!

I was in a city this last week and got a PSL in the airport. Mmmm! I haven't been to a Starbucks, but one other time since moving here. What a treat!

This was very enjoyable to read, your descriptions and your thoughts spoke of wisdom and goodness to my heart. Thank you for sharing your time.