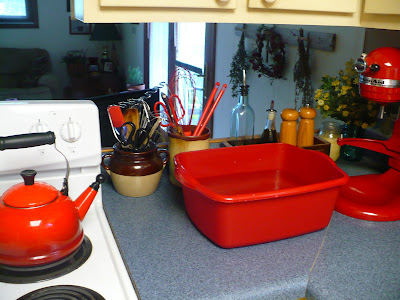 My pantry ponderings today have everything to do with this past week's experiences.  It was at times... interesting.  :)

The Tale of the Water Emergency
One afternoon my husband walked in the house to tell me we won't have water for awhile.  It seems while he was changing the filter in the crawl space (done every October and April)... the one in the pipe where the well water connects to the house... the pipe broke.   Not exactly what I needed to hear.

For much as the cobbler's wife has no shoes, I who preach the gospel of preparedness was not prepared at all.  I didn't even have any gallons of water in the garage!  All the easily useable water we had in the house was half a case of bottles left over from the summer (purchased on sale at Kroger's) and the two gallons in the under-the-sink filter system. 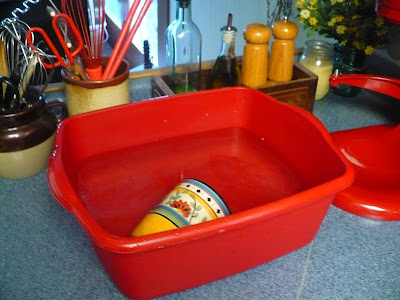 Part of the bad news (or perhaps it was good?) was that I had a sink full of dishes from breakfast, lunch, and afternoon baking soaking in hot sudsy water.  Sooo... thinking of easy solutions, I pulled out the dish pan (shown above) that I use to wash herbs and greens from the garden and filled it with some of the water from the filtered water spout.

As I washed each dish, I gave them a quick swim in the dish pan and found it worked quite well.  I wasn't concerned about it being cold water since they had already soaked awhile in very hot suds.  When finished, I saved that water for pouring in the back of the toilet to flush.

At least I had some knowledge what to do when the water goes out but I made a mental note to store water and purchase one or two extra dish pans, this one was only a few dollars at Wal Mart (at least it was last year).  Of course it has to match your mixer.  ;)

Oh, the plumber came the next day and our water emergency was short lived.

I must be more prepared for a water emergency for most of the time they are sudden.  At least we can do more when there is time to prepare as Stephanie did when a hurricane was expected (and did) hit New England.  She filled up their bathtub and other containers, made certain the dishes were all washed and the laundry mostly caught up (for it is never completely caught up, you know).

The above was a story of what could happen when one procrastinates that has a happy ending.  It just happened to take place during a week when hubby and I worked on two projects that had been left undone...

The Tale of the Completed Composter
The first was to build the inexpensive composter we bought for the deck with some of the money he made at the bookstore in AUGUST.  He has been very busy or recovering from his own surgery!

There used to be a joke amongst our friends when we were young (who were mostly engineers) that the last person you want building anything is an engineer, even though hubby has great carpentry skills.  I could dust off that old joke this week.

For as I was recovering from eye surgery, I walked in the family room while he was putting together the much needed composter and asked him if he was forgetting something.  He looked at the instructions and said he didn't think so.  I reminded him he had to get the composter out the door to the deck, hehehe.

Fortunately, he hadn't put the top or bottom on yet so we could kinda squash it up and wiggle it through the door which would have been impossible if completed.  He was so intent on following the instructions (you know the kind... put A in slot AAA, B in double B, etc.) that he didn't think of the fact the composter is rather large.  ;)

It is SO good to have it on the deck.  I've found with most things in life, if you make it easy you are much more likely to do it.  Now I can just walk to the deck with food scraps, egg shells, coffee grounds, etc.  We still have the large compost pile in the back corner of the property, the one I avoided when there was mud and snow!

The Tale of the Neglected Bag of Wheat
Our second procrastination project was one that had been near the top of our To Do list for awhile.  A friend who was moving gave me a large bag of wheat not too long after Stephanie had brought a bag from her co-op when she visited (a loving thing to do when you have packed for a large family).

I poured the wheat Stephanie brought into buckets to use immediately.  But I did what one should NEVER do and that was to leave the other bag of wheat as it was (at least sitting up from the ground) when you know you have little critters who like to wiggle through the space between the garage door and the building (shiver).

So here it is two years later and I still had Stephanie's wheat to use since I hadn't baked as much bread as I once did.  Christopher was living near campus for awhile and I often use half ground wheat, half King Arthur's unbromated bread flour.

Hubby washed two empty buckets and I washed the lids and then let both sit overnight to dry completely.  Then, with baited breath, we poured the wheat into the two pails and it looked okay.  I had purchased a small package of oxygen absorbers and placed three in each pail before the lids were hammered on and the two pails were labeled.

We went to all that trouble because we wanted to use that bag of wheat as an "emergency" backup.   Now, for flour and such I usually just place them in the deep freeze for about a week to kill bugs (although I have read it is a good thing to do that twice, I have never had a problem with one freezing).

A Couple Useful Links
Speaking of wheat and preparing flour to store, etc., I read two excellent blog posts about the subject this week.

This useful blog post is about how many cups of flour there is in a pound of wheat... here.

This excellent post is about oven "canning" dry goods... here.  I have heard about doing this but now I'm definitely going to use this process the next time I purchase cornmeal!

Along this line, I remember in one of my cookbooks (I think it was an old Beverly Nye cookbook) that the writer would save up her used Ball jars (washing them, of course) and then process them with water inside before storing at the end of the season.

That way she had clean jars and stored water.   I expect if one is in the middle of canning season, processing some water in jars would be an easy use of time.  :)


Now... think...
is there anything you have been
procrastinating that should be done soon?

The interesting thing about this week's projects was that they didn't take long at all once we started!
Posted by Brenda@CoffeeTeaBooks at 11:50 AM

I had a water emergency just before Labor Day. I turned on the kitchen faucet and nothing. . . (of course you try it again and still nothing). The pump had rusted off the well pipe in the hole (40' down). They couldn't save the well. I did have some gallons on hand and about 20 gallons (treated) in big jugs, as well as some bottled. Next door ran a hose over. It took about 1-1/2 weeks because of the weekend and holiday. I'm sure your husband would get a kick out of the "shower" I fashioned out of a garden sprayer, until I could find a regular battery camp shower.

I have a horrible time here with pantry moths and have finally conquered them. From bay leaves to bleach to freezing, good grief!! The last bucket I did, I didn't have any oxygen absorbers, so I used a couple of hand warmers. They work the same way and will be half price very soon in the sporting goods department after hunting season. Quick solution when the real thing isn't at hand.

Oh I'm sure that there is. One thing I did get accomplished last week was to get the paints inside from a garage that will freeze. That's always a chore.

I took off following your link about dry canning. That sounds like something that I would be very interested in doing as I don't have the freezer space for such things.

Sounds as if you might want to fill the bathtub with water whenever a filter is changed. =) How frustrating for you both.

Thank you for even more Good information! I went to the site about dry canning. She mentions to not can walnuts as the oil in them can go rancid. When Granny Miller had her blog [ boy do I miss her, and hope she is well.. ] ,.. I wrote her as she mentioned she used her Food Saver to suck the air out of glass canning jars and put walnuts in them. Food Saver has instruction on how to do it. She said yes the walnuts stayed very well when she put them on the shelf using the Food Saver. I do this now too. Sarah

Oh I forgot this thought... If you are putting the composter on the wood deck won't it stain the deck floor over time? Even with a bottom moisture will leak out won't it? Sarah

I like reading your ideas for preparedness. One thing we do is keep about 10 gallons of drinking water on hand. We had a big earthquake here years ago, so we know how important water is.

I do love the vibrant reds in your kitchen, Brenda! And I need to get some water on hand because if we suddenly lost our water (which would most likely be because of an electric failure) we have nothing extra. Nothing. Not a good situation. Thank you for reminding me!