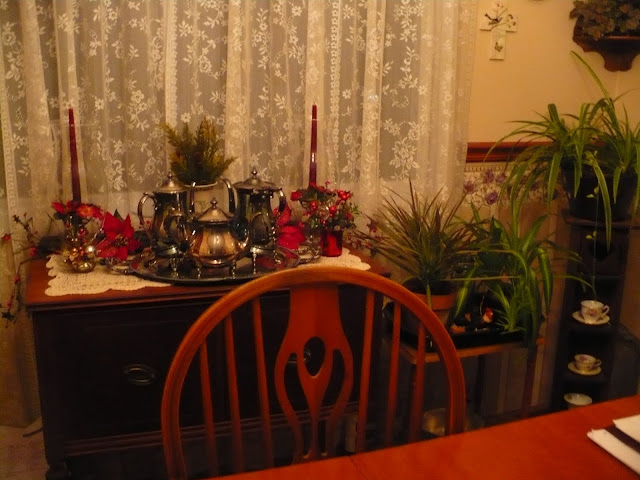 This has been one of the better Christmas seasons in awhile.  When I was thinking about it, I realized it was because I had followed my own advice and made a few Holiday goals that were possible given all circumstances.  Honestly, that helps a great deal to not become disgruntled with what is not possible.

I have been enjoying the various Christmas music specials on television these past couple of weeks.  Quite a few old favorites have appeared recently on some of the Christian networks available with satellite TV (most likely available with cable TV in town).

The NRB (National Religious Broadcasters) channel has been showing The Joy of Music's Christmas specials (which I have loved for at least a decade or maybe two) and Tim Janis Christmas specials.  Although I have to admit that I fell asleep during the instrumental Tim Janis special.  It was perhaps too soothing?

The Hope Channel (7th Day Adventist) has a beautiful special they broadcast called Joy to the World with Fountainview Academy from British Columbia.  I found out it is on You Tube (in the States) as Part 1 and Part 2.  Gorgeous!!!!  Watch it full screen to take in that lovely snowy scenery.  I actually have it playing on another "window", the music is beautiful.

I think I have mentioned before that, while I love that brief time in Autumn when the leaves are colorful and appear to have a glow from within, my favorite scenery is the snow covered world in Winter.  I have two New England winter scene prints in my living room that are probably Christmas scenes but I leave them there all year.

While I still enjoy the carols that are popular and have been for decades, over the years I have developed a fondness for the carols that are from Great Britain of old.  Music such as In the Bleak Midwinter and Once in Royal David's City.  I didn't listen to classical music as such growing up or I probably would have been aware of these old songs.

I grew up with Elvis singing Blue Christmas and Holiday songs as sung by George Jones, Loretta Lynn, or Brenda Lee.  Not that there is anything wrong with them!  I have the Elvis Blue Christmas CD as well as a compilation of Christmas music which includes Alabama singing Christmas in Dixie.

We had a lovely time together with my son's family and his in-laws (very special people) as I have already written.  I prepared for the special dinner a little at a time, decorated the house at the same rate, set the table ahead of time, had all the food that could be prepared in advance ready, and asked for my daughter-in-law and her mom to bring their specialties.

My daughter-in-law brought my husband's favorite green bean casserole she makes and her mom brought this orange jello based "salad" that I love.  I enjoyed it instead of the pies I made for dessert (since it is fairly high in sugar).

Later this week, Hubby and I are going to Cracker Barrel for our annual Christmas outing.  We usually go there earlier but a variety of circumstances prevented it.  It is always better late than never!

I didn't get all the Christmas reading accomplished that I had planned but that is okay.  Until my right eye completely recovers (and I am praying that happens without surgery), then I have to limit reading time so my eye doesn't get irritated.  However, I did read some favorites and I'm currently reading Jan Karon's Shepherd's Abiding (one of my very favorite books).

Another part of the season that I always love is my Christmas tree with all the favorite decorations and the sparkle of the light.  I wasn't sure about putting it up in the family room this year (done only because I didn't want to move all the stuff in the corner where it usually stands in the dining area... the photo shown above!).  However, I like it in the family room so much that it has found a new home each December.

To respond to a few comments:

I do still have the cute cabin (it doesn't light up but I do decorate it with pretend Christmas lights swagged on the roof).  I will put a photo up next week.  That was an expensive item from a specialty gift store but I bought it at their garage sale where they had flawed items really cheap.  Still in their original boxes!  All that was needed was a little glue and it looks fine.

I will share a few other favorite DVDs, even though it will be after Christmas.  Only a few old favorites were shown on Hallmark this season so getting the DVD is a good thing.  Especially now that they have come down in price (most of them).

I appreciated the comments on Saturday's Pantry Post, great ideas for giving out of the box Christmas gifts.  I also once gave a book of stamps and a box of mixed special occasion greeting cards as a gift.  Decades ago to my husband's elderly aunt who was in a nursing home.  I think I got the idea from Emilie Barnes???  Anyway, his aunt loved it.  I had forgotten about that.

Sorry, there is no time this week to put together a "Mentioned in this Blog Post" section!

I'll be back next weekend and then I will be taking my usual Christmas through New Year's break.  Merry Christmas, my friends!  May we take the time from everything we are doing to remember the true meaning of His Birth.  Maranatha.

Image:  My dining area as viewed by the light of the dimmer switch on the chandelier over the table set on low.  This corner now has a lot of "stuff" so the tree went into the family room.
Posted by Brenda@CoffeeTeaBooks at 12:52 PM

Merry Christmas, Brenda! Your blog continues to provide a wealth of information and always much to ponder. I’ll be checking out You Tube shortly. Just now, I am happily watching Maine Cabin Masters. Not very Christmasy, but exciting. (They’re purposely dropping a tree on a roof to kill two birds with one stone.)

Praying healing for your eyes. You have too much to do to be sidelined for long. It must be a terrible chalkenge for a reader like you.

How wonderful to have all sides of the family be friends. Not typical at all, but so much better for all. I remember telling my grandson that I loved his grandmother and he said, “Thank you” with real feeling. ☺️

Have a blessed Christmas, Brenda! I really love your lace curtains! They make such a lovely peaceful feeling.

Wishing you a blessed Christmas. Joan

I loved your comment about there being no holiday movie police! Good thing the same holds true for book police! We can save them to,savor in the new year when the weather is bleak!

Merry Christmas from The Mitt!

That jello dish reminded me of the mother in law. Son was Type 1 and MIL and FIL were Type 2. She took a large can of pineapple slices...drain the juice into a pan...leave the slices in the can. Bring the juice to a boil and dissolve a small pack of SF jello in it. Pour back into the can and refrigerate. (No extra water!!). When its set, cut out the can bottom, run a knife along the side and slide out. Slice between the rings. A can in red and a can in green sliced up makes a lovely CHristmas side.

Maybe I'll make some tomorrow...off to check the pantry stock!!

Oh, so Happy to hear you still have your little log cabin replica! Will be fun to see it again! 😊 We have been watching Hallmark Christmas movies all month! I am fortunate enough to have a husband who will watch them with me! (A bit unusual, I gather!) We also have purchased a few to have on hand, as well. We ordered The Nine Lives of Christmas after you mentioned it in your post, as we couldn’t find it on the Hallmark channel! I really need to keep in mind about giving up expectations for the holidays, especially after last year! It was to be our first Christmas with Two new grandbabies and we got sick and had to cancel! It was our very first Christmas all by ourselves, and I was so disappointed I cried! Thankfully, we were finally able to get together as a family on New Years Day. As my brother pointed out, at least the babies won’t remember having to wait until New Years to open their gifts! This year everyone is healthy, PTL!
Wishing you a peaceful and blessed Christmas,
Laura C.(WA)

And for those of us spelling challenge THAT way...even worse! Good grief. Why do I torture myself to see how I did? Ha!

Merry Christmas and a very Happy New Year! I look forward to your Saturday posts.

Merry Christmas Brenda. I've been enjoying reading your blog all year. Thank you.

Merriest Christmas, Brenda! Despite your limitations, you’re able to celebrate with a whole heart because you are focused on the important things of Christmas- our savior, family, and enjoying the blessings of the season!

Merry Christmas to you and your family. I will be listening to Christmas music in January as well so don't worry about watching your movies. I like to listen again about July as well.

I thought I was the only non Seventh Day Adventist who knew about Hope TV. I will definitely check out the special.

No laying aside of the Christmas books and movies for me at the end of December, I still enjoy them all well into January!!! I'm off to Cracker Barrel this morning to look for some bargains. I found a cute little glass deer and red robin for only $.50 before Christmas!