Sunday Afternoon Tea - Life at the speed of time 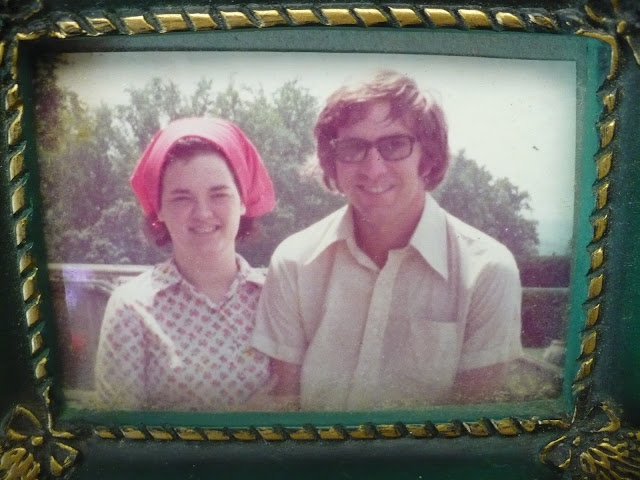 Teach us to number our days, that we may gain a heart of wisdom.
Psalm 90:12

This past week, I was taking a break from the gotta-do's of the day, relaxing in the overstuffed 1980's hunter green chair in the Study.  I had been reading through the second letter (in the canon of Scripture) that Paul sent to his son in the ministry, Timothy, and listening to music.

Ahhhh... but not just any music.  I was reliving the late 1990s when both of the kids lived at home and contemporary Christian music could often be heard, usually coming from a cassette player.  Well, it was the 90s.  I tell you, tears formed when Point of Grace began singing The Great Divide as I remembered when my daughter and her good friend would often sing this song (beautifully) as a duet.

I tried to remember the name of her friend but as hard as I tried, her name would not come to that place in my brain that remembers even good friends... but I have never been good with  names.  I still think of her when I decide to take the scenic route home from town and I turn left at the house her family once owned.

It is often mind boggling when I consider how fast the years have passed.  I've written before about being in my early twenties and reading a book by Edith Schaeffer, in which she talked about being sixty years old (as she pondered how quickly the years had gone by in her life).

In the above photo, I had just turned twenty and my brand new husband was twenty-seven.  We were on our honeymoon and I am pretty sure this was taken at Biltmore House, in North Carolina.  This was around the time I read Edith's book, written when she turned sixty.  At the time, I thought how old that sounded and then it seemed like I blinked and I had already turned sixty.

I don't know about you but sometimes I find the speed of life frightening.  Oh, not in a scary movie kind of way but in that sense that so much of what you wanted to accomplish is no longer possible.  One day you realize you can no longer do the same things you did so easily before.  Like sitting on the floor with your legs crossed Indian style (I do not know the politically correct word for this now) and being able to get up easily.  I no longer can do either.  ;(

That is why I now have Psalm 90:12 written on the chalkboard by my desk.  It reminds me to live life on purpose, to ponder each day and not let weeks pass without accomplishing at least something... like spending time in prayer for the country.

That is when we gain a heart of wisdom.  When we stop, reflect, read His Word, talk to Him, listen to Him, surround ourselves with good books and devotionals that lead our thinking back to the Father, the Son, and the Holy Spirit. For it is only in doing so that we can walk that journey He began for us on the day of our birth.  Actually, the Word says that He knew us before that... He knit us together in our mother's womb.

Sometimes I think we hear these verses so much that they no longer mean anything.  As in that beautiful artwork hanging in the living room that becomes almost invisible to us because we walk past it multiple times a day.  We only really notice it when we stop... think... look... reflect on its' beauty.

There is absolutely nothing we can do to stop this planet from rotating around the sun in such a way that we have only twenty-four hours in a day, seven days a week, fifty-two weeks in a year... with an extra day thrown in every four years.  Nothing.  Nada.

However, God understands that our life is but a wisp and a vapor.  That is why He tells us to number our days... give them a consideration... do that which is set before us each day given our circumstances.  He no longer expects us to accomplish what we could when we were twenty.

This is a Truth I must constantly remind myself... that God does not require us to do more than that for which He has equipped us.  He equips and qualifies those He calls... at the right time.  You have this promise for what He calls you to do each season of life.

To be honest, I do not want to be twenty again... or thirty... or any past decade.  I have the grace for today and that is enough.  Yes, there are certain times of life that I miss, especially when there were four of us at home.  But that was then and this is now.

Perhaps the real secret of living each day is in the understanding that while our physical bodies will someday wear out... we have an Eternal life before us.  We are but pilgrims passing through now, having been given a directive to be an influence of our real Kingdom as we walk this journey.  We are not Home, yet.  "Keeping an eye on the prize before us" as we live one day at a time.  That is really all He asks...
Posted by Brenda@CoffeeTeaBooks at 1:52 PM

I often have flashes of wishing for those times when our kids were still at home. It's almost an ache in the heart really. I should be used to them being out of the house now, it's been more than 13 years since our youngest left the nest. It was really brought to mind the other night when our grandson was here. Just feeling nostalgic, I suppose.

I sometimes wish I could go back and live with my more frugal ways. Maybe my life would have been easier. But wisdom comes with age.

Biltmore- we were there before kids too. Yes- looking in mirror reminds you have fast time flies.

The politically correct way would be to sit criss cross :).

Because the internet is impersonal, it's nice when we connect with someone who has a similar background or interest. My husband is 7 years older than I am, a veteran and very smart. We went to Jesus People tent meetings when they came through Tulsa in 1972. You and I share a love for many of the same books (Miss Read, D.E. Stevenson) and I, also love tea, antiques and cats. Yours was the first blog I found, years and years ago because I searched for 'book blogs'. I hope you continue to recover from your eye problems.

I can see some of you from this pose, in your granddaughters...oh the time went by so quickly indeed...I look in the mirror and wonder "what happened?" We were once so young and way too optimistic I think...life has gotten me over that notion now. But still there is a small door of hope that GOD will intervene for some of my offspring! I keep asking anyway...
Elizabeth

Do you ever look at your wedding/honeymoon pictures and think "But we were sooo young!" We felt so grown up, but when I look back we were just babes. Strange feeling.

We are heading out in about 2 weeks to make a trip east for fall foliage and visit family. We'll be going back to Big Meadow on the Skyline drive in Virginia where we honeymooned 46 years ago. Looking forward to it. Blessings Brenfren.

As with most young mothers, I was so busy and wish I would have enjoyed it more. I often think of our Sat. nights watching a movie, eating popcorn, playing a game. I would go back there in a heartbeat.

The theme of our sermon this week was rest. To take time everyday to rest and reflect because God's love isn't based on what we do or don't accomplish as he loves us matter what. Good to remember.

No, I don’t want to go back. I would probably make all the same mistakes and more. I have too much to press on for to go back. I could break out singing “I Wouldn’t Take Nothing for the Journey Now” ☺️

I agree, at one time 30 or 40 or 50 sounded very old to me and now I have reached and passed 60. Time goes by very quickly and I wouldn't want to go back to re-do those younger years. I do question what I have accomplished and what God wants me to do now.

Yes, that looks like Biltmore Estate to me, too. I love that place. Time certainly does fly and I realize it more and more every day. I have heaven on my mind a lot more these days!

This was such a good post! And timely, too! My hubby and I were just talking about how fast time flies and it sure seems to go faster the older we get! We, too, married very young! Your statement that “God does not require us to do more than that for which He has equipped us. He equips and qualifies those He calls....at the right time. You have this promise for what He equips you to do each season of life.” especially spoke to me! For I am in a new season babysitting my very energetic almost 16 month old grandson on a regular basis. Wasn’t sure I had the energy for it, but ask God daily for His strength and stamina! He hasn’t failed me yet!
Blessings,
Laura C.(WA)
P.S. I can sure see your daughter in you! (From photos you’ve posted before)