Living the Pantry Lifestyle - How I Stock Up links 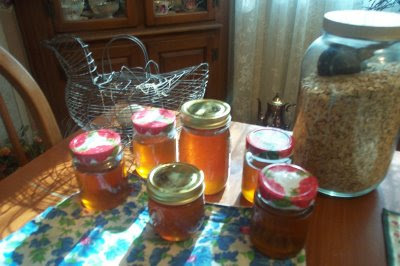 I think spring is beginning to win the battle of the seasons at last.  Even though we had another snow early this week, it melted fast and it was almost what I would call warm yesterday.

I can't say it was a terrible winter, it was just long.  Given the choice, I think I would rather be dealing with cold temperatures in April than multiple blizzards and an early Spring as in recent winters.  Spoken like a true introverted bookish type person who kind of likes being forced to sip hot beverages and curl up to read just a little longer than normal.

Monday begins my "little at a time" outdoor chores marathon, perhaps the busiest weeks of the year for lawn and garden work.  It takes awhile but I usually get most of it done and since I begin with the highest priority, the most important outdoor chores that are my responsibility are... in most years... accomplished.

I promised a blog reader last week that I would link to the series I wrote nine years ago about "How I Stock Up".  (I can't believe it has been nine years!) It is pretty much the same now, some priorities have changed with just two of us at home.

They begin with a post I wrote providing a general explanation of what a Pantry Lifestyle is all about and then they are in an order that puts the first Stock Up post being last as you scroll down.

How I Stock Up Series... here.

Note:  Some links may not go to specific articles now since this was written some years ago.

Image:  This photo was taken a few years ago when I had purchased a large amount of raw honey at a good price and poured it into jelly jars.  I learned the hard way that raw honey is easier to liquefy again if needed in small jars.
Posted by Brenda@CoffeeTeaBooks at 11:32 AM

I think spring has settled in here too, though we are still 'cool.'

I highly recommend your 'stock up' posts.

I always so enjoy your Pantry Lifestyle posts...they are so helpful and inspiring!
Love,
Tracey
XoX