The Kremlin Conspiracy, a review 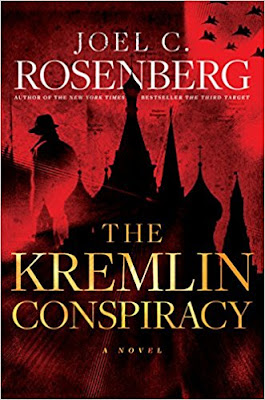 Joel Rosenberg is a master story teller.  I tell people not to start reading one of his books until you have set aside everything else you planned to do that day.  Never begin one at night if you plan on getting any sleep.  Once again, he drew me in from the first sentence and kept me turning pages as fast I could to see what happened next.

In The Kremlin Conspiracy, the hero is a former marine, Marcus Ryker.  The events of the first chapters take us to his decision to join the Secret Service when his enlistment in the Marines is up.  In the first chapters, we also meet Oleg Kraskin, who will become a central figure in Russia as he works for his father-in-law, a thinly disguised Putin character.

Through the lives of these two men, a plot is weaved that explains why Rosenberg believes the former Soviet Union is a threat to not only the U.S. but to world peace in general.  As in all Rosenberg novels, there are pages of nail biting action in between the reader getting to know all the characters.

While this could easily be read as a stand alone novel, I am looking forward to a sequel already.  As with all excellent reads, I was sorry to see the last page come around.  It is definitely one of his best stories, yet.  Highly recommended.

The Kremlin Conspiracy was provided by Tyndale publishers for the sake of review but the opinions are my own.

More information can be found... here.

Disclaimer:  Most links to Amazon.com are Associate links.
Posted by Brenda@CoffeeTeaBooks at 11:55 AM

I have read a few of his stories. Nail-biting is an understatement! Though I am a little perplexed about his view of Russia. Really? I just don't see them that way... not anymore. I will have to read this book. You have me hooked. But I am a little wary of all the Putin hate these days.

I’ve missed a few of his books but I’ve read many. I enjoy his books very much!