Sunday Afternoon Tea - Why Homeshooling Turned Out to Be a Blessing 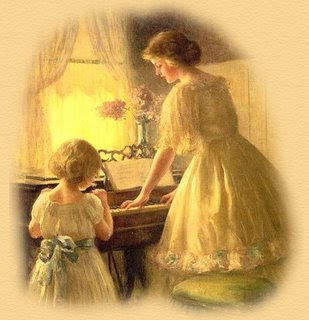 This past week... in the midst of a rare Oxford blizzard... our friend, Sarah (Clarkson) Fink-Jensen, gave birth to a beautiful baby girl named Lilian Joy.  She is Sally and Clay's first grandchild and I can't be happier for them.

When we were in New England many years ago and staying at our daughter's house with the Clarksons, I mentioned how Stephanie and I looked so much alike when I was forty-ish that even close friends couldn't tell us apart from a distance.  She was surprised and asked me just how young I was when Stephanie was born!  The answer is twenty-three.

I married young and Sally married when she was older.  So even though we are the same age for a couple of weeks, she became a grandparent in the same year when my oldest grandchild started driving (my prayer life has increased a lot).

When Stephanie was asked how our families became friends, she said it was because her mother blogs about her cat. Actually, I had read a couple of Sally's books and listened to one of her tape series after we started homeschooling.  Somehow we started communicating online and a friendship developed.  Most likely because we have a passion about the same things... raising children to love Jesus, and Beauty, and great Books.

It was so good to find someone else who loved great literature, creating Beauty in the home, and raising children to love Jesus.  Especially in a world where staying Biblical is not always popular and some in the Church have not understood our passion for books.  Which is why, in spite of not doing as much for their ministry as I would have liked, I am always first to raise my hand to promote a new book!

The thing is, if one wants to raise their children to have Biblical values these days, they are automatically swimming upstream from the norms of society.  It is good for our children to know there are others who hold fast to what we believe is important.  I think it makes us all braver to hold forth Truth when we are not standing alone.

The decision to homeschool was not easy.  While I had been curious about homeschooling, the only reason we took our son out of the public schools the first year was that we did not want him to be forced to take ADHD drugs (which he was) and he was being labeled by teachers.

What was originally planned to last a year or so ended up being a commitment through his high school years.  He attended a community college his senior year for needed credits but otherwise our home was the center of learning along with a good co-op and extra curricular events.

I was thinking recently about how that decision to homeschool was hard at the time but brought with it so many blessings.  Not only did Christopher do well given the time and space to learn but by the time he started college, he was ready for the advanced math needed to study computer science.  Many of the other ADHD kids he was in school with fell behind and never caught up.  Homeschooling gave him time as well as encouragement.

I was so frustrated at times that first year because I thought I wasn't very successful at this whole teaching at home thing but you know what... once I had done it for awhile and read lots of books by people who had gone there already (which is how I first heard of Sally)... it actually became fun.

I discovered a whole new world of people who cared about the same things I did.  At the time, I didn't even think of grandchildren and here today my daughter is very involved in homeschooling.  I think she is better at it than I was.  Actually, I know she is better and my brilliant son-in-law (shhhh... don't tell him I said that) is very involved in their schooling, too.

I am proof that one does not have to homeschool perfectly to have a great result because many of our homeschool years were after I developed a chronic illness.

Our daughter-in-law was homeschooled and comes from a lovely like minded family.  So that initial decision, which was made half hearted and for a year at first, had far reaching blessings.  God sometimes only gives us a short term glimpse at what He is doing and we have to have faith it is for a blessed outcome.

So if you are in the midst of bringing up children, whether they are educated at home or in a classroom, have faith that He is at work in the process of growing each child.  There are days in parenting that one fears their little cutey will never grow up to be responsible and then there comes that day when everything you have taught them just kinda' clicks.

Like anything worth doing, there are hard days and exhausting days and sometimes it seems nothing is working.  They may even be grown up and still prodigals, having walked away from the Lord and you.  But God is still there in the midst of your every days.

Don't ever give up.  The most important ministry you have is to be an influence for God in the lives of those He has placed around you, whether a spouse or children or grandchildren or nieces or nephews or the neighbor kid next door.

We have had to walk by faith many times through the years and now when I see the results from staying the course... I know it was God that brought us through.  Miraculously.  Lovingly.  Sometimes only shedding light on the very next step but that was enough to keep going.  There is a reason the Bible says we will lay our crowns down at His feet.

He will provide everything you need for what He ask you to do, sometimes you don't see it at the time but He does.  I can look back and see how the circumstances that brought us to homeschooling were upsetting at the time but in them were the seeds of God's blessings.
Posted by Brenda@CoffeeTeaBooks at 7:14 PM

I love this post, my friend! You know I say a wholehearted Amen!!!

Thanks for this, Brenda. I needed to hear it. I have been homeschooling my 7 year old who has some slight special needs and keep doubting whether it is the right thing to do. I know deep in my heart it is right compared to putting him in a very secular, liberal northern New England school system that goes against what I believe in. Plus, I am very pro-family and want them to be raised by their own family, not strangers. I wonder sometimes if I am doing the right thing for him academically, even though I know spiritually it is the right thing. But there are days when he tells me what he has learned and I can see fruits of my labor. I have relatives quiz him on spelling and math, and it makes me annoyed because they don't think he is learning anything. Or they harp on me about socialization. But then everyone comments on how polite and nice my kids are....lol Your post gives me hope!!

Thank you for the post. Yes, there by the grace of God go I. My oldest homeschooled will graduate from college in a year, when I send the youngest off to college! My oldest still remembers books from way back when, and some she says have helped her with college life. She is always quoting some book to her sister...saying do you remember? But, God is the one who got us through, helped with curriculum, and I give Him all the glory.....some days are still hard:) but it has been worth it.