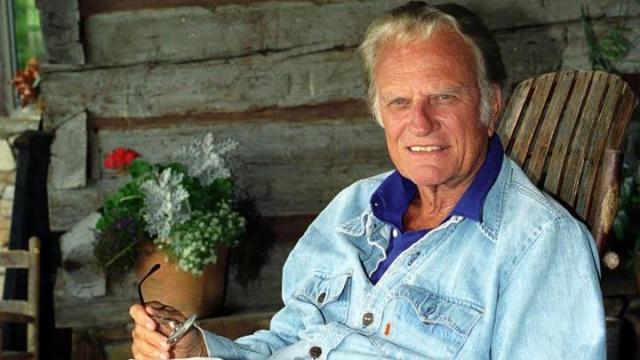 I was hoping this February would not be like those in past years.  I've actually thought it quite pretty with the snow and all.  Then the rains came.  Flooding rains.  With rains come mud.  Although the sun finally popped out behind a cloud this afternoon, my world could be the backdrop in a Dickens novel... all gray and gloomy and chilly.

Within the days of gloom came the headlines that Billy Graham had gone on to Heaven.  I could imagine Ruth waiting for him, as well as friends and family who had gone on before him.  It was an interesting combination of grief and joy that followed for when one is ninety-nine years old, most are beyond ready to meet their Master.

I have such a fond place in my heart for this man.  My mother avoided churches like the proverbial plague but whenever Billy was preaching on TV, she made sure we watched him.  Which is why I cannot recall the first time I ever heard him preach.

Even these days, the Billy Graham Classics are played at times on one of the Christian TV channels about the time I'm fixing dinner.  My stove is separated from the Family Room television only by a half wall (it is really one large room) so sometimes I will listen to Billy while chopping onions and cleaning carrots.

I became a Christian in the midst of the Jesus Movement, arguably the one large "awakening" between the 2nd Great Awakening and now.  I was blessed to know many older Christians, men and women that I greatly admired.  I realize now they were all of what we call "the Greatest Generation".

It was through these elders of the Church that I came to read Schaeffer (both Francis and Edith) and even met a few Christian authors in person at the Presbyterian church I attended at the times.  I felt safe there.

Of course, God doesn't keep us where we feel safe and I eventually made my way into the wider world of the Church where I met good people and those that were... not.  I have known Christians who helped me love Jesus even more just spending five minutes with them.  I have also known Christians who have caused me to doubt my faith.

That, my friends... is the Reality of the Church.

However, in the midst of all of that there were a few people who anchored my belief that all will be well with the Church.  The best of them was Billy Graham.  He preached Jesus wherever he went.  He never forgot what was his message... or Who was his message.

As often as he traveled, there was no scandal and as many people as he met... there were no rumors of him being a different person in real life than in the pulpit.  His family speaks highly of him.  That tells a lot about the character of a famous man.

I think we all needed a person to respect throughout the years.  Someone who... while not perfect... showed the rest of us how to live the Christian life and that it could be lived with character and grace.

I was looking at photos of the people lining highways and small town streets as his motorcade took the three hour drive to lie in repose in Charlotte.  A couple of things struck me as I looked at these photos.

First, contrary to what the national media will tell you my friends... even if only half these people would call themselves Christians then that is a whole lot of people in this country.

Second, I don't think it was because Billy preached Christ and Christ alone that all of these people wanted to give their respects.  I think it is exactly what he meant to me... a life lived with humbleness and good character those ninety-nine years he walked the sod of this planet.

He showed us that it can be done.  He gave us hope.  He always pointed to the Source of that hope.  I have a feeling, along with friends and family, our Lord was standing to welcome His servant with a warm hug.

"He showed us that it can be done."

I like how you put that. His message was simple. His life was simple. I think it was very wise of him to take a humble salary from his organization and nothing more.

I was just talking with some friends about this movement! I hope you will post more about your experience. I am from the generation after the Jesus Movement, but I had an old friend tell me I was just like the Jesus People. :) That's high praise!

I enjoyed reading your remembrances and thoughts about Billy Graham. Every time I saw him on an interview it only took about 10 seconds for him to reference, "Jesus is the way the truth and the life..." I loved that. My father responded to the call at the 1963 crusade at the Los Angeles Coliseum. That was a wonderful turn around for our whole family. I was in the thick of "the Jesus Movement" in the southern California area in the 70's. I was just listening the "Love Song" today. "Little Country Church on the Edge of town". Good memories.

A beautiful tribute, Brenda. So many of us will be eternally grateful for Dr. Graham’s ministry. It’s an incredible legacy he leaves this nation. I was alternately sad and joyful for his homegoing. The sadness is for this nation, which has lost a mighty prayer warrior.

He was a remarkable man and a great servant for the Lord.

I went to a crusade with my parents when I was a girl. Upright, humble those have been the hallmarks of his life. You’re right, he showed us it can be done!

Thank you for your post on Billy Graham. I loved him for the same reason you did. He was such an humble man and someone so at peace. He just seemed to exude peace. That's how I want to be, too, and I know God is a peace-giver and gives peace the world can't take away. I'm so thankful for that.
Thank you so much for your lovely blog!
God bless,
Sparrow

I love that he finished well and never brought reproach on the Church! A faithful follower!