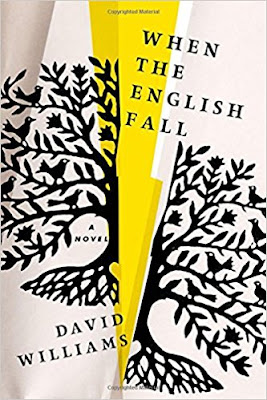 The flu is making its way through our house, nothing terrible but enough that we feel too weak to do much.  I'm better than my husband (so far!) which means being able to keep up with simple meals, doing the dishes, etc.

So I have had an opportunity to read more than usual, getting started on a review book and a novel I purchased for the Kindle (cheaper and immediate gratification) after hearing about it recently.  The novel is called When the English Fall by David Williams.  I'm talking about it on a Saturday because it fits in so well to the whole need to deepen one's pantry.

The article I had read about the book called it a "dystopian novel from the perspective of the Amish".  Well, that definitely had me interested.  That is where the title comes in, if you read Amish based novels you will know people outside the Amish community are called "English".

The book is written from the perspective of an Amish man who keeps a journal about everyday life.  We learn about his childhood and youth and how he and his wife came to live among the Lancaster, Pennsylvania Amish in the first few chapters.

He writes about the seizures his daughter has and the nightmares they bring about.  Not to give anything away but we come to realize they are warnings sent by God of a coming catastrophe.  Of course, they don't know that at the time.  He also writes about the crazy weather they had been experiencing and the affects it has had on their crops.

We learn about his English friend who brings him carpentry orders and the people within their Amish community.  The author lays this foundation in the first chapters and after that...  I could not put this book down.  It was probably a good thing I read it when I was sick (at first in a separate room from repairman who were fixing our water heater).

The EMP event happens suddenly even though readers are made aware that the weather and nature have been odd for awhile.  This event is caused by a sun storm and one day the power went out and did not return.

Now I must insert here something that happened just as I was getting to that chapter.  Our power went out.  It was absolutely creepy how weird that was.  We didn't have storms in the area and no logical reason for a power outage that I found out covered part of our town.

It was like... ummm, God... are you trying to tell me something?  Insert the Twilight Zone theme here.

Most of the book is about how people try to survive without any power.  We learn how the Amish do better than most people at first and how the city dwellers have the most immediate affects.  I like how the different relationships are fleshed out in a way that makes the reader wonder what we would do in each situation.

One thing I love about this book is that it is a rare dystopian novel that is written from the perspective of a man of faith, which also means there is no swearing (except a very mild cuss word now and then from the English), no smut, and we see how people who trust God might go through such an event.

On the other hand, the author tells a true story of the breakdown in society that would occur after such an event.  He does not sugarcoat what happens to society.  This was such a good read and an interesting way to show what might happen if a "suddenly" occurs.  That's what I call those events that we've known might happen, hope they don't, but if they do would most likely occur without warning.

There are many lessons that can be taken away from the story, the most obvious being that the people who are prepared have the easiest time adjusting at first.  It also shows what I have written before, that it is impossible to stock enough food, equipment, supplies, etc. to ride out something like an EMP blast.  But you will still want to deepen your pantry after reading it!

Besides all of this it is just a really good story.  It is hard to believe this is the author's first novel.  You know a book is good when you are still thinking of it days after reading it and wanting to reread it soon.

More information can be found... here.

Disclaimer:  Most links to Amazon.com are Associate links.  I thank you (I could purchase the book because of the credit available!).
Posted by Brenda@CoffeeTeaBooks at 4:12 PM

I am sure you have heard of these because they've been around for a while... Terri Blackstock's Last Light series. That was my first introduction to thinking critically about the future.

I will read this one for sure!

Well, in the last 24 hours I have gotten precisely one thing done—> I got the book on Kindle and read it. Couldn’t put it down. Thanks for the recommendation.

Brenda, Patsy at the blog theworkingpantry.blogspot.com.au had a post about a book on the same subject. This book was titled: Powerless,The year the lights went out by Susan Goldring. Someone commented in her comments that they had seen a British movie some time back about this subject. They did not know the name of it. I looked it up and it is called Blackout. It is about Britain going through this. Made in 2013 and is an hour and a half long. I found you can watch it on YouTube. The person who first mentioned this movie said it was made in a realistic format like a news documentary. These two might give you or your readers further insight and information. Sarah