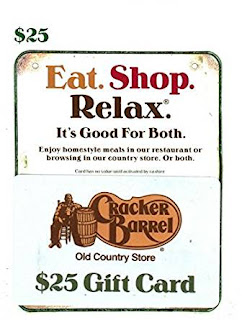 I'm continuing to chip away at the little things I've been procrastinating on this past week.  Quite often, the procrastination is not on purpose but because something is not on my current To Do radar screen.  Such was the Cracker Barrel gift card I'd had tucked away in my billfold the past couple of months.

I knew I had plenty left on the card to cover our meal when my husband and I went out to breakfast with my sister and her husband, so I was quite stunned when the cashier said it had a zero balance.  I had enough to cover it but my very nice brother-in-law said to let it be his treat.  The cashier was insistent that I call the number on the back of the gift card.

I would remember it off and on but it wasn't much of a priority until last week, I was cleaning my purse and saw it again.  This time I moved the gift card and the receipt that said how much should be in it to my desk where it stayed in sight.

Yesterday, the house was quiet and I was caught up on the day's Must Do list when I  noticed the gift card on my desk and immediately called the number while I was thinking about it.   (As an aside... why do they make those numbers so small?)  Anyway, a recording took my information and told me that indeed, I had a zero balance.  I knew that already.  It also gave me another number to call, which was Customer Service at the Corporate Headquarters.

So I called it and got the nicest young man with a very definite Tennessee accent.  He was able to check into the history of the card and confirmed that I should have had the amount on the receipt.  He informed me that my gift card had been hacked.

I DIDN'T KNOW THAT WAS POSSIBLE!  A HACKED GIFT CARD?

Turns out, it is happening more frequently and apparently, it was becoming a real problem although he wasn't allowed to tell me the specifics.  He checked further and told me the remaining balance on my gift card had been spent in Texas.  I've never been to Texas.

He added the credit due me to another card and said it would go out in the mail right away.  So about twenty minutes on the phone paid for itself in credit worth over $30.00 (it was my daughter's Christmas gift to me).  That was worth the small amount of effort it took.

We chatted about hackers and such while he was putting together the information he needed and uploading the credit on the new card.  He said there are many ways they can hack a gift card and mine may (emphasis on the maybe) have been compromised because I had used it once already.  He said it was also possible that the hacker just happened to steal that entire batch of gift card numbers.

So the lesson is, besides how doing something one has been putting off can be profitable... whenever you plan to use a gift card, as soon as possible before using it, you should check the balance online or with the phone number on the card if such information is available.  Especially if it is from a well known store, restaurant, etc.

It is a good thing the medicine has helped my eyesight or I probably could not have read that phone number!  I'm looking forward to what two more treatments do to my sight, even if not the treatments themselves.  My second treatment is the last week of August.

I still have a list of little projects that need accomplished and the one huge project... cleaning the garage.  We will each have to wear a mask when doing so since there are mouse droppings on shelves and such.  I won't even think about cleaning it until cooler weather is here unless a plumbing projects requires it sooner.

NOTE:  I hope to put together a list of prepper sites I follow on Facebook soon.  I don't follow a lot of them but each site is good at sharing links and information from other websites.
Posted by Brenda@CoffeeTeaBooks at 1:47 PM

Happy Birthday week! I like the idea of using the week for reflection and recollection. I had a couple of days away from ordinary responsibilities and took with me the book "My Spirit Rejoices" by Elisabeth Leseur. My, how I was challenged/refreshed by her journal entries. Her heart desires are closely aligned to my own....It was definitely the right time for ME to read this book, reflect and re-collect.

Thanks for this heads up re. gift cards. Makes me think twice about GIVING them!

Our credit card got hacked last weekend. Just when my hubby was gone with the checkbook. Thankfully I had a bit of cash, a full tank of gas and a full pantry. Our hacker also went on a little spending spree in Texas, Houston to be exact. Our credit card company alerted us to the unusual activity and we informed them that that wasn't us.

Sorry for your inconvenience. I wish these hackers would use their skills for good not evil. I'm looking forward to your prepper recommendations. Thanks for all you do!

Praying that your eyesight returns to normal. Or as good as normal gets at our age (happy belated birthday!).

Great! One more thing to be concerned about. No wonder that they want to put chips in us. 😏

Wanted to wish you a most Blessed Birthday before the week was over! Hope I am not too late! It's been a busy month for us. Thanks for the info and the head's up about gift cards! I had no idea gift cards could be hacked, too! Crazy! I have one to a restaurant we need to use! So Glad to hear the treatments are working for your eyes!
Blessings,
Laura C. (WA)