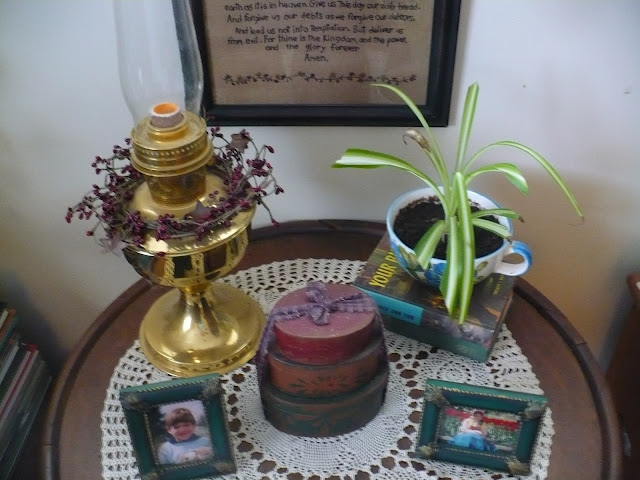 I had planned to write another book review mid-week but my reading glasses broke and I cannot ummmm...  read.  Not books, anyway.  It did force the issue on me finally finding a new eye doctor that accepts my insurance.  That went quickly and I had an appointment today with new glasses expected in two weeks.  I will buy an inexpensive pair of reading glasses in a couple of days.

It was wise, even if I was forced into being wise by circumstances, to get a checkup and new glasses while I have insurance that covers them.  After they arrive, I will make an appointment with my retinal specialist to get some laser surgery done (which I know will be needed).  The eye doctor found more spots that will need zapped.  A challenge of having Juvenile Diabetes.

You know how it seems challenges come one right after another?

The pharmacy I've used for years went out of business recently, giving us only a week's notice.  All prescriptions were transferred to another pharmacy in the area and when I went in to get my long term insulin, I was informed they were the only pharmacy in town that did not accept my insurance.

So... I then found a pharmacy close to me that did take the insurance.  When I went over today to pick up my insulin... now on my very last pen... I was informed my insurance has decided it will not pay for Levimer, anymore.  Even though they have been paying for it at my former pharmacy.

Which requires an emergency call to my doctor's office in the morning.  The pharmacist thinks the insurance company is going to force the doctor into switching me to a newer long term insulin, which should work and is less expensive.  But one would think again there would be advanced warning.  All prayers welcome.  Did I mention I have one day's worth of that insulin left?

Just like my glasses breaking, it could be good for me in the long run as the doctor tries a newer long term insulin that the pharmacist says is even better than what I'm using now.  However, I can't miss even one shot so prayers are welcome that this gets fixed tomorrow.  Even if I get the old insulin temporarily.

It shows me again how precarious our health care and insurance system is!


Posted by Brenda@CoffeeTeaBooks at 7:42 PM

Praying for you. Blessings, Sharon D.

Praying all will work out for you, Brenda. These things can be so frustrating, but as you said, can work out for our good in the end. Thank you for the reminder. My daughter and her family are going through one of these experiences right now. Their landlord gave them five weeks to find another place to live since she wants to sell their house. The Lord helped them to find a much nicer, larger, (and more expensive) house and they move in tomorrow.

Yes, praying that all resolves very well for you and may the doctor get things ironed out on your behalf. Yes, it does seem that things pile on all at once. Good thing we know Who has everything under control and Who is never put off by store closings and mayhem in the insurance industry. Let us know how it works out. the

I pray for you this evening. Rest in the assurance that God's "got" this! I'll be interested to now how it all works out.

Praying this new trial will quickly be resolved and work out for your good in the long run. And for peace while you wait. God be with you. Marsha

Praying the insulin issue gets resolved for you very quickly.

Praying, friend! Trusting God to work it all for your good!

All this can be nerve wracking, though!

The Lord will work this out, Brenda. If you have to, go to the ER. I am praying as I know that all of your readers will do.

It should not be this way. It didn't used to be.

I do hope that you get this issue resolved very soon, Brenda. Being a fellow Type 1 I know how important it is to have insulin running around our bodies at all times. It makes me thankful, living in England, that we have the National Health Service. Did you know that the British Prime Minister, Theresa May, also has Type 1 (Juvenile) diabetes? She has had it about three years I believe. Injects up to five times a day.

Praying for you Brenfren. Yes it does make one feel very humble when we realize that but for God's grace we are just a breath away from disaster at any given moment. It thoroughly puts the trust muscles to work, does it not? Hugs Bebe

Eternal Father, You who created our bodies and are our Master Healer, I pray that you will bless Brenda's body with all the natural insulin she needs as she struggles to find another source. Touch her with your hands of healing that her body might be strengthened and renewed by your Holy Spirit and the constant necessity of man-made insulin might no longer be necessary. Comfort and bless her as she goes about her day knowing that the God of of all Creation watches over her. In Jesus' name, Amen.

Would you mind to be asked, how much does the old insulin cost without insurance please?

He knows your every need. Praying!

Well, if you do not have the insulin you need in time...that would be an emergency...so not hesitate to use the emergency room! We live in the Dark Ages...how stupid this whole medical mess is!! So sorry...will be praying you will be ok!!
Elizabeth in WA

Ugh! Insulin problems.....a situation I remember very well. The next worse thing is being required to use a mail order pharmacy that doesn't ship on time. The almost force you to use them because of the cost. We ended up paying the long dollar because we couldn't trust their system.

I think he was on the Lantus pen......$4000 for three months' supply (we had an odd insurance HSA with a high deductible, but the employer paid for some of that)

Feel for you lady.....I don't miss those days one bit!

Praying all is well with you, Brenda! Blessings, Bess