True Faith and Allegiance, a review 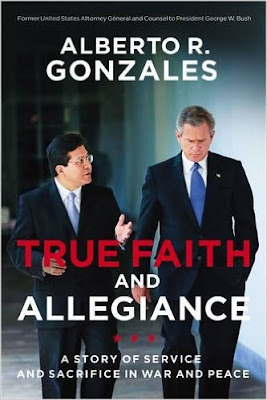 This book by Alberto R. Gonzales is subtitled:  A Story of Service and Sacrifice in War and Peace.  I was interested in it not only as an autobiography but viewing the events of 9/11 through the eyes of the Attorney General at the time.

I will first say that the Prologue made me smile as the former Attorney General and Counsel to the President describes what it felt like to be the Designated Survivor during the State of the Union address in 2007.  I had recently watched the pilot episode of Designated Survivor on TV and my son, daughter-in-law, and I had talked about what it must be like to be in that position.  He explains here what it felt like when he served in this capacity.

Alberto Gonzales story in itself is a reason to read this book.  It is a true American story of a boy from what one could view as "poor" circumstances who becomes the first Hispanic person to rise to his position.  This is the kind of book one could give to a young person to show them it is possible to achieve far more than what the world expects of you.

However, that is what all biography is about.  The telling of the story of events from each individual perspective.  Which is why historians read widely from a variety of resources and biographies to get a good idea of each historical event.

This volume will be much appreciated by individuals and historians.  Not to mention it is an exciting book to read.  It grips you from the Prologue to the ending.

True Faith and Allegiance was provided by the publisher for the sake of review but the opinions are my own.

Further information about this book can be found... here.*

*Most links to Amazon.com are Associate links.
Posted by Brenda@CoffeeTeaBooks at 12:42 PM

I love that show designated survivor as well and did not realize someone had written a book about being one I will have to give this book a go and read it . take care and have a wonderful day / evening .

I enjoy biographies and autobiographies. I'll have to see if I can find this book, or get it through the library system!