Sunday Afternoon Tea - Ponderings on the Passing of Time 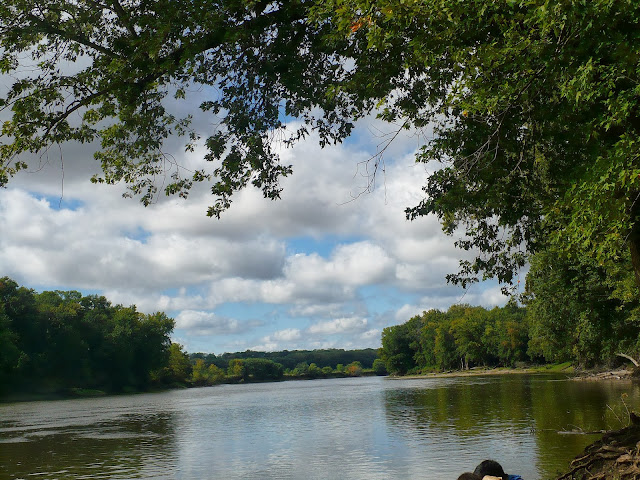 Live life, then, with a due sense of responsibility,
not as men who do not know the meaning and purpose of life
but as those who do.
Make the best use of your time, despite all the difficulties of these days.
Ephesians 5:15,16 Phillips

Recently, while walking past the area by our property that is heavily forested, there was an aroma in the air which caused me to stop and peek into the woods.  While there are unique smells in the Spring and a few in Autumn, this one was definitely a perfume of late Summer.  Earthy, flowery, and musky all at the same time.  Beautiful.  Mysterious.

We are most definitely at the cusp of another season.  Over a month away in reality but as I walked into the grocery store, there were clay pumpkins where grills and charcoal sat just a week ago.  I expect mums will make their appearance soon... although I hope they have the sense to wait until the Summer air has cooled a bit.

Two other events occurred recently, both of which reminded me of the quick passage of time.  The first was my quarterly A1C doctor's appointment and the second being another birthday.  It was quite alarming that another three months had passed so quickly... much less an entire year.  Yikes!

Birthdays always bring with them a realization that the world stops for no one.  I have mentioned before that as a "just turned twenty" bride, I read one of Edith Schaeffer's books where she wrote about being sixty and thinking that quite old.  Now I've passed it and I personally like to think I'm in late middle age.  ;)

My birthday also brought with it ponderings about life, what has been accomplished, what I'd love to accomplish, etc.  The doctor's appointment reminded me of limitations... although he was pleased at all the numbers appearing on my chart.

Part of that pondering includes mental aerobics (the only kind I do well these days) as I think through most days and how to accomplish more that I want to get done.  Nothing strenuous for I have the work in the lawn and garden for that.  Mostly the making of Art while there is more energy early in the day.

For years my early morning routine has been to stumble my way into the kitchen to take the first shot of insulin and a thyroid pill (as one of my auto immune diseases is Hashimoto's), wait the thirty minutes until coffee is legal, and watch the local news followed by a couple PBS cooking shows.  By that time, I tend to be alert.  Most days.

The problem with that is the passing of two morning hours and sometimes it seems in a blink of an eye it is noon already.  Then time to start dinner and then wash dinner dishes.  Days and weeks and months fly by in a haze.

So I'm experimenting with changing up the morning schedule as it is possible. The medication, insulin, and waiting thirty minutes for coffee is cut in stone.  Although I admit to fudging sometimes on the waiting for coffee.  However, I'm changing the rest of the routine to take place in the Study for an hour or so.  Will it work?  That is yet to be seen.

For there is a great Truth in that how one begins their days often sets the flow of the remainder of the day.  Whether one is at home, in an office, at University, or hiking the Appalachian Trail.  Mornings do count.  A lot.

People I admire who have a regular quiet time routine most often have it first thing in the morning.  Although I loved reading in The Daniel Prayer that Anne Graham Lotz has her quiet time after a walk and stopping for coffee each morning as she does not truly wake up until then.  I can so relate.

It really is true, as I have found in almost any area of life, that the little things are what the big stuff is made of.  I have been able to accomplish a lot by doing it just a little at a time.  It may take weeks upon weeks what someone else can do in a matter of days... but it gets accomplished.  Far better than just sitting and doing nothing.

Don't get me wrong, there are severe limitations with illness.  Stephanie and I talked about the possibility of me going with her to Sarah Clarkson's wedding in England.  However, after some moments of dreaming about Oxford with my best friend (that being my daughter), reality set in and I reminded her I can hardly spend a morning away from home before having to head for the sofa.

But one must do what they can with what God has given.  Everyone has something.  No person goes through life without limitations, however small... for we live in finite bodies within a finite world.

Quite often you cannot see them and people have learned not to talk about their challenges.  Especially in the Church.  "How are you today?"  "Just fine, thank you." "And you?"  "Just fine."  Ahhhh... the amount of fibbing that goes on each Sunday.

I really don't have a clear ending to these ponderings, yet.  The tweaking of my mornings has just begun.  They say it takes twenty-one days to make a new habit but I personally think it takes longer when coffee is involved. And mornings.

But I do want to make more Art before the next birthday arrives.  God willing it does.  I want to pray more and read the Word more and talk to God even more often.  You know, more than the usual Please Protect Them quick prayers.

Honestly, what I want is to live life more on purpose and less in waking up and realizing a week has passed and wondering where it went.  I think we all can relate to that desire.  So I'll let you know how the morning changes are going and if they change anything.  With the help of Starbucks Veranda Blend.  Sigh.  We will see.

Photo: The river at the Feast of the Hunter's Moon a few years ago.
Posted by Brenda@CoffeeTeaBooks at 6:55 PM

Maybe you're one of those people who would enjoy "mornings if they only started later in the day". Times does have a way of just hurrying on by when we weren't even looking. Especially the older we get, the faster it seems to go. Best wishes on your new schedule. Thankful for your good report on the A1C. Blessings, Sharon D.

Love reading your musings and sometimes find myself chuckling. Now do not think I am laughing at you...please, no, never. I do learn new things about you and find them endearing like the fact that you are planning to live in this mortal coil until you're 120. Actually, for the Believer, 60 is infancy, yes? Maybe hour 1 infancy at that. Yes, do fill us in on how this is going. As one who hasn't had coffee since her husband brewed that last batch, I am interested.

My endocrinologist has me taking my thyroid pills during the night when I get up to use the bathroom. Some of the other medicine I take cannot be taken for four hours after that thyroid med. I wonder if your doctor would think this good for you and if it would help you tweek your morning routine. Having coffee right away, for instance.
So glad your numbers were good.

"I want to pray more and read the Word more and talk to God even more often."

Happy birthday, Brenda. I love the beautiful scene and quote accompanying it. Thank you for sharing. :- )

Thanks Brenda for a wonderful post. I've been feeling the passage of time as well. I was so longing for summer, and now it feels like it's almost gone. I've been wanting to start a morning devotion time instead of my sporadic bible study. Your words have encouraged me to try harder at it. Thanks for sharing your thoughts. Having one of your posts in my inbox always makes my day!

That sounds like a great plan for your new morning routine. I too have wanted to be more intentional about starting my day in God's Word and spending more time at His feet praying & listening & learning from Him. I have found from experience that turning on the TV in the morning is not a good idea. If I need to know the weather, I mute it until that part comes on. If I watch any news (good or bad) or the Today Show, it distracts me and I end up feeling like I didn't use my time wisely. There is way too much of "the world" on TV. I have also started to go days without turning on the evening news and just check Fox News on the internet so that I know enough about the news and not get saturated with it since it is so unhealthy. Blessings to you & Happy Birthday! ~ Love from Texas, Kim

Your daughter's going to the wedding in England? How exciting for her!!

Hi Brenda! Catching up on blogs and hoping to get back to a more regular blog routine. Can't believe the season change is around the corner. Looking at the weather and seeing so much heat and no rain is not very invigorating but I suppose it is to be expected. Must keep watering my poor gardens. I'm nearly done planning the school year and getting things organized. Starting the younger three on Monday. Rachel and Andrew have been back at high school for a week.

What a lovely post. I found your blog from a reference by Terri at Blue House Journal.
I love how you are thinking through things - wanting the most out of the life God gave you.

I too am at that time of life where I realize how quickly time goes by. Our nest is officially empty as of a couple of weeks ago. We are easing into the "just the two of us" routine quite nicely. In fact, as much as we love our girls, we are loving our solitude together. We had babies very quickly after getting married at a very young age so we are delighted to still have plenty of time left together.

As part of the emptying of the nest, we have gained two "extra" rooms. One has been turned into the guest room and the other is the office which I plan to also start using to create ART. I have had it deep in my soul for years but fear and perfection kept me from finding the time or space or willingness to do anything. Now I'm finally ready. Several ladies in church have had encouraging words telling me they see me as an artist. So I'll take that as God's encouragement.

Blessings to you! I can't wait to read more of your blog and hear how your new morning routine works out.