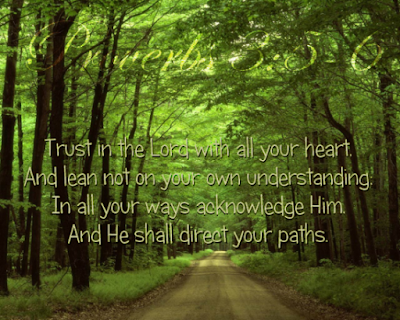 I was reading Rory Feek's latest blog post last week* and thinking about how far God's ways are above my own understanding.  How because Joey's last wish was for a friend of theirs to sing at her funeral and Bill Gather was there and how he loved his singing and how this unknown man in a wheelchair now has a chance to follow his dream of recording music.

I mean, really.  Wasn't there another way for God to work?  Couldn't Joey live to see her small special needs child grow up?  I don't understand.  But then again... God has heard me say that quite often through the years.  I should have known my life would be interesting when, as a young Christian, he gave me the above scripture as my life verse.

I didn't understand my father dying suddenly when I was a child but it led me into the arms of another Father.  I think God has been wooing me from early childhood.  I can't remember most of my childhood years (perhaps due to that trauma) but my earliest memory I do have is seeing what I thought were horns growing up in our yard and becoming convinced the devil was popping through.

While my folks were not church people, they knew enough about Biblical Truth to assure me the devil didn't grow like corn or squash or tomatoes.  I can chuckle now that my thoughts were on Good and Evil around age four but there was definitely a sense that God was there.

That wooing, the longing in my heart to know God, did lead to accepting His call in my teenage years.  I had no idea at the time what it would require of me, the break it would bring in the relationship with my family, the way it would change... everything.  I didn't understand at the time that chasm would make it easier to walk with Him eventually.

When my first child died as a preemie, I didn't know a beautiful baby girl would come along the next year or an active baby boy twelve years later.  Not at that time.  No... I couldn't see in the future a house full of kids and kids-in-law and grandchildren.  All I knew that day was the loss of an anticipated child and returning to an empty nursery.

I definitely do not understand how God has led me... a person who prefers safety and security and basks in one day being the same as another... to step out in faith in such a way that would make an adventurer struggle.  Over and over and over.

Like the time we moved back home from Michigan without the gas needed to make the trip, much less to stop for something to eat.  Although we had already rented a storage shed for our stuff if we did make it, we only had a place to live for one week.  Did I mention we had no money?  This was at the end of a year with little and then no income.

But we took the one step we knew and as we were pulling out of the driveway, the man who had been our next door neighbor at the temporary house... the biker dude... ran to the window of the car (my husband was driving the U-Haul) and handed me a $100 bill.  He said "something made him do it".  I would say Someone.  (His sister was a Christian who had been praying for him many years.)

I didn't understand why God would push us... much as a mother bird nudges her baby that is ready to fly... out of the nest.  Ready to free fall into an unknown future.  But He did and He has over and over and over again.

I didn't understand why He allowed my world to fall apart and we had to sell our beautiful home in the neighborhood I always wanted to live (at a loss) and move to Metro Detroit.  Leaving behind my newly married daughter and all my friends.  Especially when Christopher and I had to stop and ask directions to the street where my husband had rented a house and the grocery store clerk was behind bullet proof glass.

I DID NOT UNDERSTAND!  Because I had always said Detroit was the last place on Earth I ever wanted to live.  Yes, God must have laughed when that was the only door He opened for us to walk through whether I liked it or not.  While the move there was not easy and the move away from there was a nightmare, the time we lived there was actually quite pleasant.

All of this to say... we cannot possibly with our finite minds understand the way God moves in our life.  There are certainly some instances where I can look back and see the path He had us on and how it did end up with our good and His Glory.

But other times... I'm certain I won't understand this side of Eternity.  It doesn't make sense to this finite brain I carry around.  I don't get it.  But He never asked me to "get it" or to understand.  He asked me to trust Him.  Simply to trust Him.

I had to laugh when I was talking to my daughter-in-law one day when they were going through a trial.  She said Christopher had told her, "Life is hard and then you die".  Yes, he is a melancholic!  But he is also the person who told the story of the biker dude at his homeschool high school graduation ceremony.

I think in the world we find ourselves living today, knowing that we cannot possibly understand is a good thing.  There have been and will be times when all we can do is Trust Him and try not to fear the unknown.  This world is full of that which would bring fear on the bravest of souls.

However, knowing this, the tapestry He is weaving of your life has the light threads and the colorful threads and those dreadful dark threads but they all are weaving a thing of Beauty.  Well done good and faithful servant.

*This Life I Live blog post can be found... here.

Posted by Brenda@CoffeeTeaBooks at 10:19 AM

wonderful post. I too don't understand why God does what He does. It is mind boggling

Please know that God knew how much I, and I'm sure many others, needed to hear exactly these words today. Thank you.

Thank you for this today. Beautiful and encouraging. So timely for me right now.

A wonderful and encouraging testimony, Brenda. Thanks so much for sharing this. xoxo

So true ... we cannot see now or understand what the Father allows in our lives. We just have to trust Him ... and oh, how hard that is sometimes. Someday we will be able to look back over our lives and what He has made of our lives.

Thank you for these words today. We are relocating to Michigan and although my DH is there and I am not yet, it is a struggle being apart and not really knowing what HE has in store for us, yet. I struggle to accept HIS will for my life and for the future. Thank you for what you write.

I think about "his ways are higher than our ways" and the fact that He knows what He's doing, even though we don't! It isn't easy but I agree with what you said about us not needing to know why, just to trust.

People have likened it to a tapestry being woven, not till its finished will we see the beauty in full.