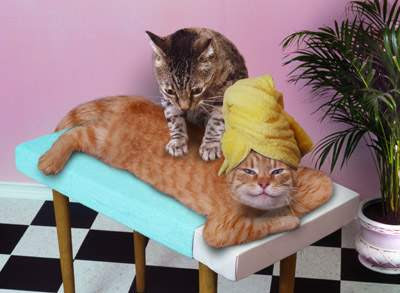 My goodness, has this been an experience I hope is the last in dealing with computers.  My son was able to come over this weekend and set everything up again. I still have to reinstall some programs like Microsoft Office, begin bookmarking again, etc.

The virus destroyed everything so we are starting from scratch.  It even wiped out the backup hard drive but fortunately I gave birth to someone with hacking skills.  I doubt most employees of the Geek Squad could get past the deleted files to find our essential financial documents and such.  He wasn't sure he could do it but I watched him, thinking I'm glad he knows Jesus and is on our side!

It would have taken an impossible amount of time to find each individual file (which is what he had to do) and bring it back but he knew which files contained the family's important information and that I would want My Photos.  When looking for the photos, he located the file that had my recipes stored on the computer and brought them up, too.  Just in case there was something he wanted me to bake you know.

I watched him working to locate files and kept telling him how smart he is.  When he says he can "think in code", he means it.  My friend, Sally Clarkson, is working on a new book about raising an "out of the box" child.  Mine grew up to be quite remarkable when it comes to computers.

Some have asked again how this happened with a brand new computer.  I was at the grocery store when my husband received a phone call telling him we have a virus on our computer.  They had our ISP number (which anyone could pretty easily get with basic skills) and he thought they were from the Geek Squad since he had been on the phone to them a few times recently.  They weren't.

I knew there was a scam going around where they do this and then charge $200 to $300 to unlock your computer.  I arrived home just after they had inserted the virus and were demanding money, got on the phone and told them I was calling the police, and tried to turn off the computer but I couldn't.  I now know (from the actual Geek Squad) that we should have unplugged everything immediately.  Although they doubted it would make much of a difference.

It is unsettling as to where they found our phone number and computer information.  There has been a lot of speculation but no one knows for sure.

Yes, we had to pay a lot of money to get the virus wiped out and Windows restored but at least it went to honest people and not hackers from Mumbai (or wherever).

So I'll be back to regular blogging soon.  I have a few way past due book reviews that must be published this week first.  It is good to be back!
Posted by Brenda@CoffeeTeaBooks at 4:46 PM

Welcome back! You were so missed by so many! It is indeed wonderful to have a son who can help with these things! And he lives so near you! I am so happy to hear you are back! Happy Easter, Brenda, and Happy Easter to all your family!

Hooray for having a son who could rescue you! Glad that you will be back on board!

Welcome back!! You've been missed. Hope you had a wonderful Easter :)

I'm glad you are back and so sorry this happened to y'all. I missed you and hope you have lots of words of wisdom to share with us. Hope you and your family had a wonderful Easter. Blessings,Sharon D.

One of my sons fell prey to that scam also and luckily he called me right when they were going to start installing the virus so I told him to shut everything down. He did and then he wiped his computer clean after that and reinstalled things plus changed all his passwords just in case. I'm really glad to see you back up and running again!

'Not hackers from Mumbai'...ouch that hurts! I'm a regular reader here and I think its rude to imply that people from Mumbai are dishonest hackers.
Glad your computer was fixed.

That is profoundly scary! What a nightmare you had to go through. You hear about these things happening and can't imagine it happening to anyone you know. So glad you have a brilliant computer geek who was able ato retrieve so much valauable information. And welcome back!

So glad to have you back!

I just hate these scammers!

I have a son in law like your son. Very handy.

Yeah, you are back! It's good to have you back. your son could work for Cyber CSI! Grin Pam (SD)

I'm thankful this awful experience is over for the two of you! I've sure missed your posts!

How unsettling! I'm so DONE with scams - of ALL sorts.
I received a similar call some time ago and said, "SHAME on you" as I clicked the "end" button on my phone.
For all the advantages of living in the technological age, there are certainly matching headaches (and heartaches)!

Welcome back! My neighbor had a similar situation after getting a new computer. My husband, who works as an IT specialist, was able to remove the virus and restore his system.

By the way, I believe you meant to say ISP not ISBN. An ISBN is the International Standard Book Number used for book identification. An ISP stands for Internet Service Provider. I had to goggle since you are Coffee tea books & me!

So glad your back! And bake that code thinking young man a batch of cookies!

Ugg....hackers... I always worry about my mother. She tends to click on things. :)

I had a phone call from "Microsoft" a while back. Very serious stuff! I played with him for over an hour. He didn't have any info like the ISBN number. I was trying to be so helpful....but I'm so inept, he started calling me names. :)

I'm so sorry you had to go through this horrible ordeal! Thankful your son was able to restore your most important files!

So glad to have you back ... I miss your posts. And happy you have such a talented and loving son. You are blessed.

I would love to bake your son some cookies for bringing you back to us!! You have been sorely missed. What a crazy world we live in. Blessings, Dee

To Mimi: She did say '(wherever)'. People can't open their mouths these days without someone becoming offended over anything.

So happy that you are back, I really missed your posts! You are very blessed to have a son who could help fix the problems. We have also had calls from hackers. They started right after my husband's new laptop gave him problems and he called Microsoft. Fortunately the hubby worked in IT his whole career so he hung up on them. But they kept calling back, so many times that I got fed up and blew a whistle into the phone(how my dear mother-in-law dealt with annoying calls!)..a bit extreme but they left us alone until just a few weeks ago when we again used the whistle. Haven't heard from them since! But it is VERY scary, how do they get their information??

So Happy to have you Back!! You have really been missed! What a scary thing to endure, but also what a Blessing to have a son so smart to be able to fix it all! Looking forward to more of your posts!
Hugs and Blessings,
Laura C. (WA)