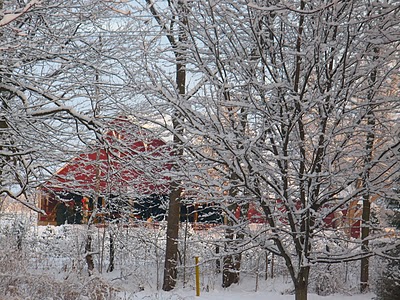 "And who knows whether you have
not come to the kingdom for such a time as this?”
Esther 4:14

I woke up far too early one morning this week.  It was very cold and I was reluctant to leave the warmth of flannel sheets and two quilts but I also didn't savor the thought of just laying there looking at the numbers on the digital clock.  The thought of coffee in a hurry became stronger than the pull of warm sheets.  It was a K-cup morning.

On the way to the kitchen, I looked toward the large window in the Living Room which looks out upon the forest.  The full moon was hiding between the trees but the light was pretty amazing.  So much so that I stopped the main mission... that of inhaling coffee... and looked out upon that beautiful color and sparkle of moonlight on snow.  Such Beauty.  Such Peace.

Like most people, I have to make a place for peace as the world around me wants to take it away all the time.  Sometimes it means shutting the door to the Study (my reward for the empty nest syndrome).  Often it requires opening a book or listening to music.  There are moments that all I can do is to put headphones on and tune out everyone.

All of these can... at any given time... bring a temporary peace.  But what about real peace, true peace, the kind that runs deep within the morrow of our very being?  That only comes from accepting the Prince of Peace as Savior and Lord.  Peace is a Person.

There is something else that brings me peace.  An understanding which has grown over the decades of walking with Jesus.  That is the realization that I am... we are... right at place in time and history and location that He placed us.

He created us for such a time as this.

He had a reason for placing you and me in a time when the world is changing faster than we can keep up.  I used to tell people I did not shock easily with what the world offered.  Now I feel shocked all the time.  The culture, the current Administration in Washington, modern media, all that came together to paint a world which looks nothing like the one I once knew as a younger person.

He was fully aware when he brought about the circumstances of my birth... long after my mother thought she was done having babies... where I was born... when I was born... the people He put in my path and the experiences He allowed... all coming together for one purpose.

For such a time as this.

For you see, I know He calls us to very difficult situations and experiences.  Life is not easy.  It is not Heaven, yet.  He knows we are being born in the first Age of Man that the world could be destroyed by humanity made creations.  He knew the Middle East would be a boiling cauldron and China would become a world power again and that Putin would enter Syria last Fall.

He knew that the the personal computer would change the world and that the Internet would link the world and that both would be used for good and evil.  He placed us here in that time and space, chatting with each other via the keyboard... it did not take Him by surprise.

He wrote about this Day and Age in the Book so when we saw these events happening, we would look up and rejoice for they all are indicators that it won't be long before His second coming and this time... it is for good.

He plopped us in this very time of His-story for such a time as this.

He is always teaching us.  He is always equipping us.  He gives us strength when we falter and notices when we pick ourselves up and shake the dust off and get on with the race... with our spiritual eyes on the goal.  He promises rewards for not quitting.

He knows we are "made of dust" for He was there, making a mud human out of the dust of that fallen piece of earth.  Then breathing in the very image of Himself.

But He also knows something we can't and that my friend makes all the difference.  He knows what we become as we walk through the fires of adversity. As we don't give up, as we keep on keeping on, as we fall, as we take a detour and find our way back, that we have a tendency for fear to grip us and apprehension to steal our peace.

He loves you just as He loved them.  Today.  Your Day.  Your Time.  Your People.  Your Place.  For such a time as this.

Image:  My neighbor's barn after a previous snow.
Posted by Brenda@CoffeeTeaBooks at 10:20 AM

Love this dear Brenda...think n pray for you often! 💞

Thank you, Brenda. This helped me over a huge hump today. It was truly divinely inspired.

Thank you. God knows how much I needed to hear exactly this message today, how much so many of us need to hear it. Life, happenings, attitudes, communications seem vicious now, more so than I remember in my 50+ years. The "still small voice" awhile ago whispered to me, "Give it to Me and watch Me work." He knows and He cares, what a glorious truth.

My kids are memorizing Hebrews 11 and we during a family worship time today (our church was canceled) heard them recite it. Those heroes of the faith were looking forward to that which was promised and we have the blessing of looking back at the fulfillment of that promise. He is our God and faithful to us as he was to Abraham, Isaac, Jacob, Joseph, Sarah, Esther....and all those whom went before us enduring hard, hard things.

Praise God for His faithfulness and His mercies which are new every morning!

Amen!! Could not agree more, Brenda!

You are so right.

And the full moon has been such a gift, has it not?

Stay warm, safe, dry and at peace. God bless you!

Amen to all points! Current world events are frightening, but I know Who is in control. I love your 'Peace is a person'. Last summer my husband had a heart attack, and of course, the bills flowed in. We do have insurance, but even so, I told a friend, "I have never been so not worried about something in my life." I thought if we cannot pay the bills and our house was taken away, that would be okay, as I would get to do something different in life--new avenue would open up. Well, insurance has paid nearly all so far, if there is anything left to pay, it will be okay. God will keep a roof over my head and feed and clothe me. You did write a divinely inspired post.

Thank-you....I really appreciate your perspective. I've heard some of this before (from my Pastor) but in a little different context. Your perspective is helpful and reassuring in these troubled times we live in. It's so amazing to me how much, and how quickly, things have changed just in our generation! Can be a bit scary, but knowing we were born for such a time as this, helps, especially knowing none of this surprises God! So thankful He is the Prince of Peace!
Blessings,
Laura C. (WA)