Living the Pantry Lifestyle - Why prepper shows drive me crazy 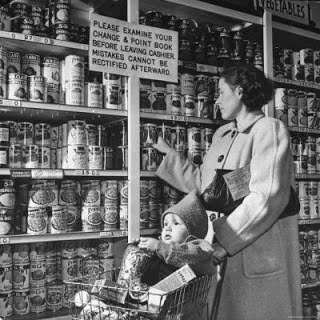 Now, I must admit.  I have never watched an entire episode of one of the prepper shows on TV.  I get so annoyed at them that I change the channel, usually about ten minutes into the program.  I understand that the preppers may be normal sane people and the editing makes them look loony.  But loony is the given word here.

People have asked when I was the moderator of a website/forum that was for preppers.  It was for a few years in the 1990s, long before that name was given to people who believed in being prepared for emergency situations.

I think one of the things that bothers me about these TV shows is that the people I watched are all preparing for a coming apocalypse.  You know, years worth of beans and bullets.  While those of us who grew up in the shadow of the atomic bomb know such an event is possible... and those of us who believe in Bible prophecy know someday it is inevitable... when is the real disagreement among even the best of friends... that doesn't mean our preparations are to be for the end of the world.

If you stop to think about it, the end of the world happens, oh... once.  But job losses occur every day, the family bread winner becomes ill, a blizzard takes out our power for a few days or even weeks, our town is hit by a storm, we need to cut back on expenses severely to save for a vacation or another car.

Life happens... all the time.  The end of the world?  The Apocalypse?  Probably a one time event.  Which is why the prepper shows give me the shivers.

If there there is a disconnect between your everyday life and your pantry, then there is a problem.

Do I believe in having emergency supplies.  I do and ummm... I do.

There are some items in a box in the garage that most likely will be mostly used should there be a crisis.  Like repair parts for our oil lanterns.  Like the wheat grinder you have to crank by hand.  I probably have more flashlights than a normal person and extra canning supplies.  I wish I had a solar generator. Otherwise, what I try to keep stocked is pretty much what I use all the time.

That is a lesson learned from my former preparedness website Admin days.  So many people who thought y2K was going to be TEOTWAWKI spent so much time thinking about the EVENT and putting their money into dehydrated food and objects they never used.  Thankfully there were only a couple items we didn't use and my husband had a job loss so the deep pantry ended up being a budget saver.

Now remember.  I was there.  Y2K could have been a big deal.  I cannot understand scoffers who put down people who prepared for it.  But a lot of lessons came out of that non-Event.  Many of my friends who were in preparedness at the time felt it was a dress rehearsal for a real possibility.  You got to see what worked, what didn't, and how to fix it.  While the lights were still on.

I have friends who felt God was leading them to move to the country and they loved it there.  They didn't move out of fear or what everyone on the Internet was predicting, they felt an inward sense of God's leading them to that lifestyle and they lost nothing when the lights stayed on.

However, there were also people who... out of great fear... spent significant amounts of money in dehydrated food and objects they never used.  When instead they could have used that money to stock up on the food they eat, the nonfood essentials they use all the time, batteries for the flashlights and radios, etc.

That is how I learned the difference between emergency preparedness, food storage, and living a "Pantry Lifestyle"... so there is little disconnect between our life as it is and what it could be like in a true emergency.

If you feel God wants you to learn to protect yourself, fine... but then make it a part of your life right now.  Join a rifle club or a Judo club, or learn wilderness survival and then... go camping.  Buy a shortwave radio, learn to use it, join a club, talk to people around the world.  Now.  Don't leave it in a box until a future event and then you have no idea how to use it.

Buy a Big Berkey and then use it.  We did and we used it until we had to put an under-the-sink system where we now live.  Don't buy it and then leave it in the box until some future event. The worst thing that would probably happen is that you would have to replace some filters.

If you feel God want you to prepare for emergencies, then include the family now and have emergency drills.  Kids love whistles and flashlights and two way radios and learning the best place to hide when a tornado siren goes off.  All practiced in such a way that they are not fearful but instead develop practical skills.

If you store what you eat and what you use every day... and learn some skills like first aid and canning and dehydrating and gardening and stuff that enhances your life today... then should there be a true emergency, your family really will be prepared.  The disconnect between your life before and after a true emergency won't be like night and day.

But you may not end up on a prepper show, you won't be exciting enough for the producers to choose.  Just saying...
Posted by Brenda@CoffeeTeaBooks at 7:59 PM

Living genuinely, is what I am gathering from your post. Thank you.

I remember the feeling about 6 or 7 years ago now, that God wanted us to learn to garden and for me to show my girls how to can. I just felt He wanted us to know how to do these things.

We don't can a whole lot but we know how and we have supplies.

Good advice. I think it is a waste if we dont store things we will use, things we like... they just wont be used otherwise.
Also I suspect prepper shows are meant to portray people who prepare as nuts. Not as prudent or wise but crazy.
I think oh well! There are more smart people quietly preparing than we know. God has whispered in their hearts and they are quietly going about it. And very sensibly too! I am noticing more and more people are starting to stock up, deepen their pantries as you say. I only felt this calling last year. But I have learned to listen and act or regret it! Very interesting times! xxx

You are right that Y2K was a real threat. It was taken very seriously at the nuclear plant my hubby worked at, as well as most electrical power generating plants. A gob of money was spent in preparing. I have to admit not much of what we gathered in preparation was used...most ended up given away to others for their use. But that is ok too. You are right, preparing so much as we can, is a good idea because yes, job loss comes...in our case totally unexpected. And nothing personal. Just a big company deciding to cut costs by cutting employees...then it becomes a political decision as to who those employees are. So what we had when that came was very helpful. Other good things came too...hubby was working on another degree then so we took out his retirement funds from that company (after the govt took a third, of course) and lived on that while he finished that degree. He and our son were in school together working on the same degree...so how special was that? A gift we could not have asked for really. And graduating together wearing the gold cords. A rare thing that few are privileged to have in life. So good things do come often from bad situations.
Elizabeth