The Ancient Path by John Michael Talbot, a review 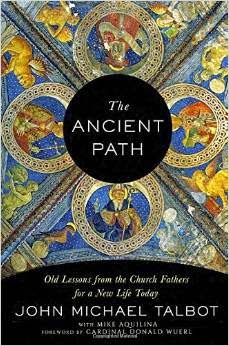 It probably seems odd that I, as a Protestant, would choose to review a book by a Catholic writer.  But there were two very important reasons I wanted to read this book.  First was because of who wrote it and the second reason was simply timing.

John Michael Talbot's music was well known to us who came out of the Jesus Movement.  There is a brotherhood (and sisterhood) of sorts of those who came to Christ during that time.  We often share a similar beginning even if we chose different paths to follow in our walk with God.

Which is why I found the chapter about the influence of Francis Schaeffer on the young Talbot very interesting.  For he was also a significant influence in my own life during that time.  But whereas most of us for whom Schaeffer was such an influence (and almost a father figure) became Protestant, John Michael Talbot became a Catholic.

As I read that chapter, he describes the process of his thinking and God's call toward Catholicism.  Oh, I get it.  That makes sense now.  Actually, that is what this entire book does for the reader.  Talbot explains much of what he has done in his spiritual walk.

The second reason I wanted to read this book was due to the timing of it becoming available.  For just the day before I had a chat with my daughter about our interest in the "Desert Fathers" and how as Protestants, we need to know more about the early history of the Church.

The subtitle of this book is Old Lessons from the Church Fathers for a New Life Today.   In this book, the author combines a narrative about his own life journey with the influence of the Desert Fathers along the way.

It is not just a biography and it is not a definitive book about the Church Fathers.  Instead we learn more about the early Church from the viewpoint of each person's influence on the life of the author through the years.

I thoroughly enjoyed the book and would recommend it to anyone who is interested in the journey of John Michael Talbot and the influence of the Desert Fathers in his life.  While thoroughly Catholic in theology, this is one Protestant who believes it a worthwhile read to those "on the other side of the Reformation".

This book was provided by Blogging For Books but the opinions are my own.

For more information about the book at Amazon.com, go here.*

All links to Amazon.com are Associate Links.  I thank you.
Posted by Brenda@CoffeeTeaBooks at 1:32 PM

I just downloaded four mp3's of John Michael Talbot from Amazon Music a few weeks ago. Music I had back in the later 70's, early 80's.
I named my 24 year old John Michael, (28 year old daughter after Bethany Green) and have been embraced in the remembrance of my conversion 1977...the music that shaped us. John Michael is timeless.
Remember? Bob Dylan....Gotta Serve Somebody.

I'll definitely read this!
Much of the reading I do each year during the week I retreat at the Abbey of Gethsemani includes the Desert Fathers (and Mothers). So much to learn...

I had several John Michael Talbot albums in my youth that I listened too. I especially liked to listen as I went to bed.

This sounds like a very interesting book. I am not familiar with the term Desert Fathers, so I am going to google it. I am familiar with Francis Schaeffer though, and Edith.

I have always loved Talbot's music and will have to read this book which I'd not heard about. Thomas Merton also talked about the church fathers, the Desert Fathers, especially in The Sign of Jonas which had a very big effect on me in high school. I think I last read it in 1962, so maybe I should look for it again. One definitely gets different things from a book after a half century or so of living!

Woman of the House said...

A growing knowledge of church history over the years has given me a broader and richer understanding of God's hand in the world. It is well worth the study. One resource that has been invaluable to me is Issues, Etc., which is a two-hour daily talk show that spends much of its time on church history. The website is issuesetc.org. You might want to check it out. :)