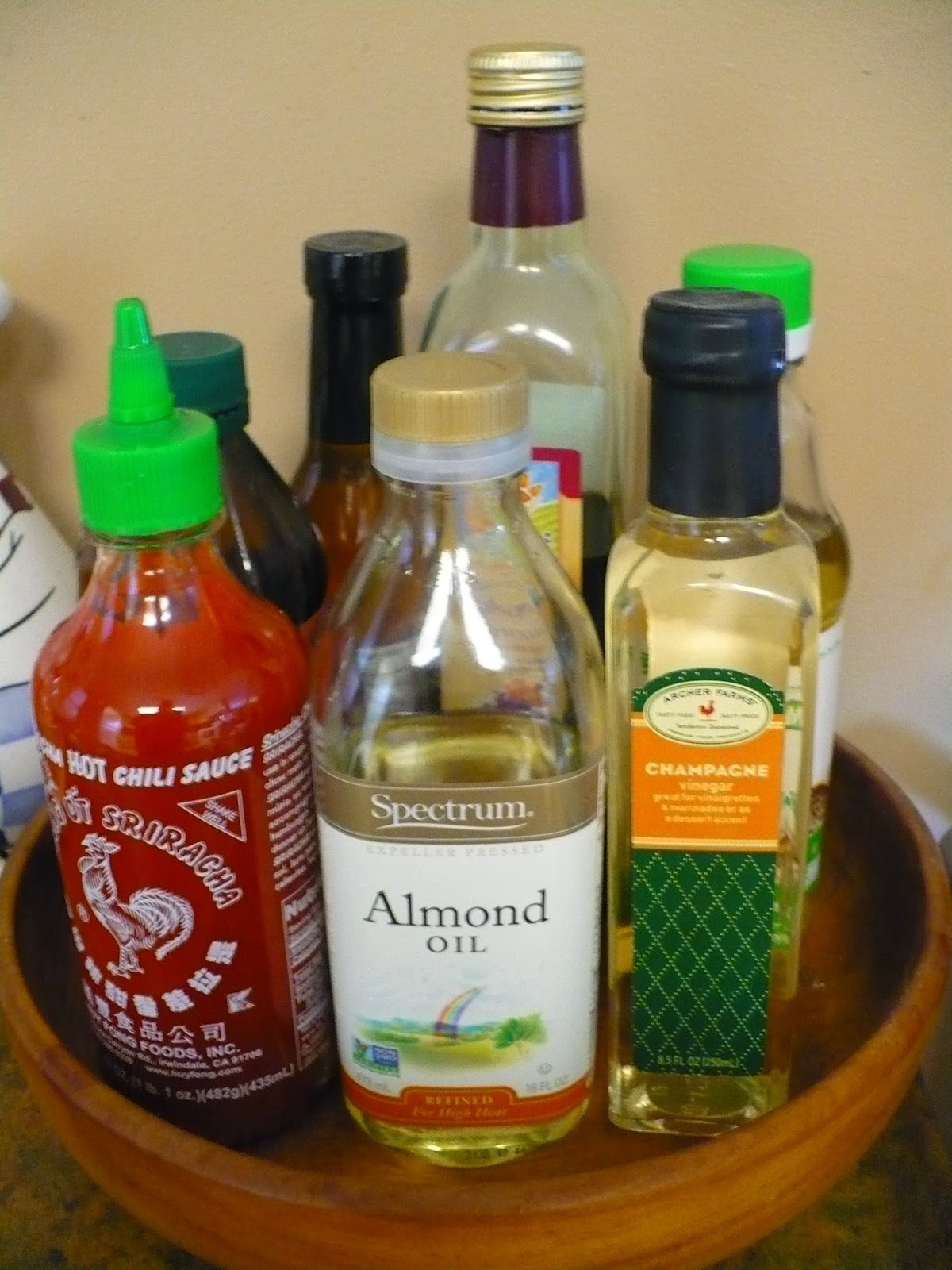 For a long time, I was a typical Midwestern cook.  I liked my recipes just the way they were thank you very much.  But the more I learned about cooking, I started adding more ingredients here and there.  Then both of my children introduced me to new ethnic foods and I can't say as I ever looked back.

I don't try anything very expensive.  They are more on the line of inexpensive gourmet foods or  "frugal luxuries" as a special friend* calls them.  As I've mentioned before, so many ethnic foods I like are not only healthy but inexpensive.  Much of it is peasant food or food prepared in the kitchen by mother for supper.

For instance, I once thought French food was always made with expensive ingredients.  Then I learned most of the ingredients are usually local and inexpensive.  A quote I thought funny was, "You know a country has had numerous wars fought on it when they made snails a delicacy".  ;)

This past week, I decided to try Huy Fong Sriracha after reading about it everywhere. I mean, really... this stuff has a huge following and fan club.  I didn't try it before because my husband does not (I repeat does NOT) like heat in his food.

But I saw a recipe for hot wings where one simply mixed sriracha and honey and brushed them on the chicken.  I decided to give it a try (it is about the same price as ketchup), putting just a small amount of the hot sauce in the honey and mixing well.  It was delicious!  I brushed it on only the chicken I was eating after it was cooked.

It reminds me of using my once "new to me" seasoning, red pepper flakes, in dishes since you can add just a little for that background heat or a lot if you like hot food.  So many Italian cooks used it, I figured it must be good.  It has had a permanent place in my spice cabinet for a long time and since I don't use it constantly, I'm pleased to say it holds up well to neglect.

The above photo shows my condiments (except my everyday canola oil and my olive oil) like various vinegars that are fun ways to try something new.  The bottle of champagne vinegar came from Target last fall, I'm waiting for delicate Spring salads to make a vinaigrette with it.  Hiding in the back is a bottle of balsamic vinegar and a flavored oil (which was given to me).

Tucked behind the champagne vinegar is my most often used rice vinegar and there is the often used apple cider vinegar.  I only buy apple cider vinegar with "the mother" and usually Braggs but I think that is Eden Organic hiding in the back. The almond oil shown was also given to me and I use it when making the homemade granola.

I want to try sherry vinegar soon.  It is a little more expensive and I can only find real sherry vinegar at the health food store.  When I read Bread & Wine by Shauna Niequist (link on my Amazon Favorites widget), she said she may have a "thing about vinegar".  I tend to understand.

I need to go back to the Asian food market where I bought the sumac and just have a look around to see what I can find that is inexpensive but tasty.  It is a good way of living on a tight budget and eating well.

Speaking of trying new things... Mr. & Mrs. Christopher stopped by a few nights ago.  My daughter-in-law was borrowing some teacups for a party but they arrived bearing a gift.  A bag of potato chips.  My son asked me to try one of them and see if I could recognize the flavor.

It was a bag of the prize winning flavor from a contest Lay's had for customers to submit flavor ideas.  The wasabi ginger submission won.  He has eaten enough sushi with me over the years, watching as I added a big heap of pickled ginger and a tiny tip of a spoonful of wasabi to my sushi to know I'd love that flavor combination.

He left the entire bag for me.  My husband won't go near it...  which is not a bad thing.

So, do you have any suggestions for an inexpensive and unusual condiment or food stuff to try?

*My bloggy friend and author of Frugal Luxuries, Tracey McBride... here.
Posted by Brenda@CoffeeTeaBooks at 2:08 PM

Yes, I have found that most basic food can be made delicious with seasonings, like you have said. I like the quote about the French and snails! I've had the same thoughts about that!

It is fun to try new things...we like sriracha, but my husband and son really like it! I have tried making curry dishes, but I haven't made a dish that I liked. Not a fan of wasabi either. :D hmmm soounds like I'm not that adventurous after all. We enjoy Mexican, Chinese, Japanese, Greek and Thai foods but not so much India.

Hi Brenda,
I always have coconut oil, as well as being healthy to drink in hot water, use for your skin, baking & cooking, its multi purpose is very high in health benefits. It is my go to for many reasons, a little goes a long way. Ruth

Hi Brenda;
Great post again today! I make homemade vinegars, some to give as gifts and some to keep myself. Some use white vinegar, some apple cider vinegar. Some people like to warm their vinegar others say don't heat, lol. My neighbor loves garlic vinegar which is so easy and fun to make. I have a European (sp) store nearby, need to check it out. Love and Hugs, Nana

Nope, not me ... I'm still that Midwestern cook who really doesn't like trying new things. Not many herbs used in my kitchen as we do not like them. It's amazing we can be friends. 😄 I'd be more like Pete. But I enjoy reading about it on your blog!!! 😉 I'd leave those chips for you too. I have tried wasabi ... Oh my ... Once was enough. 😝 Pam (SD)

Noooo, I am so old-fashioned it's not even funny. None of these "exotic" condiments for us. I just got John used to salsa for goodness sake. Ha! Sometimes it's nice to have "a treat" all to oneself. Enjoy those wasabi chips. *shudder* =D

Brenda, do you use fresh herbs, or dried, or a combination? I haven't yet figured out how to consistently have fresh herbs. Does anybody keep a kitchen window herb garden, and if so,,how difficult is it to maintain in the winter months? I have bought fresh herbs at the grocery story to use in a particular recipe, and then usually the remaining bit ends up spoiling. Cilantro is a good example. I love it, but the grocers sell it in such huge bunches,,I can't possibly use it all before it goes bad.

Do you eat the mother in the vinegar? Thanks,Angela

I'm not one for trying new foods. However now that I'm on THM plan, new foods are becoming a huge thing in my life, especially items like apple cider vinegar, coconut oil, coconut flour, almond flour and milk. And I'm enjoying them!

Last spring I was at the Quaker Meetinghouse for their Spring Festival which I try to attend each year. They always have several types of homemade soups and quiches available for sale and I decided to get a cup of the Cream of Mushroom and must say it was the best I had ever tasted. When I was finished I went to the kitchen window to say how wonderful it was and the woman who made it offered me the recipe! In addition to garlic and onion, it also was seasoned with tarragon, curry powder and apple cider vinegar. The flavor is fabulous!

Probably the newest spice I have been tinkering some with is turmeric. Very healthy. Found a recipe that supposedly is the favorite chili of the Obamas. Had to change it some, such as leave out the red pepper as that bothers hubby a lot (must be an allergy). The main things that spice this chili are chili powder, cumin and turmeric...in addition to onions, garlic etc. I have read up on turmeric and am trying to find as many yummy ways to use it as I can. Another item that is new to us is coconut sugar. Use same amount as cane sugar. Supposed to bother us diabetics less. I use xylitol for parts of recipes instead of sugar. Also we buy the xylitol gum (via amazon) in large container because it is so much cheaper this way. We diabetics have to guard our tooth health and xylitol is one of the best ways I know of. I also use xylitol toothpaste. Almost don't need cleanings at the dentist. Also I am supposed to be gluten free, though I sometimes cheat...so use a lot of alternative flours etc for basic cooking as well as desserts. And really? These alternative flours are so much more nutritious...speaking of garbanzo bean flour, amaranth flour in particular. But you must use some xanthan gum and or guar gum to take the place of the gluten in those recipes, if you want things to hang together well. Though expensive, you use such a small amount that you do not need to replace them often. Oh, another accidental find was using a bit of cashew flour to replace some of the regular flour in a recipe one day. WOW, that is as good as adding sugar...made it much sweeter. I never thought of cashews as sweet but they are fruit. If there is one thing I encourage you to try out is cashew flour...to replace some of the sugar in recipes. If you use only a small amount, say 1/4 cup, I doubt it would even be noticed as cashews...and would make a good difference in the taste.