David Wilkerson: The Cross, The Switchblade, and the Man Who Believed, a review 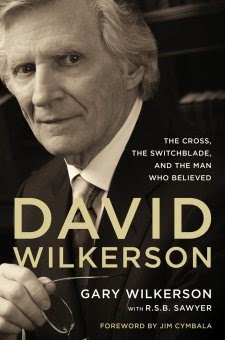 I looked forward to reading this book from the time I saw it would be available to review.  For I will be quite upfront and honest to say David Wilkerson has been a hero of mine since the Jesus People days of my late teens.

The book and the movie, The Cross and the Switchblade, had taken America by storm and Rev. Wilkerson was in some ways a Rock Star to those in the Jesus Movement.  As I followed his ministry, read his books, and received his newsletter... I knew there was a lot of suffering in his life.

This biography is written by his son, Gary Wilkerson (co-writer R.S.B. Sawyer).  So the story not only shares with us the facts of his life but it goes behind the scenes in a way only a family member can do when writing such a book.  Not only that... I think it is perhaps written as only a son could write about his father.

The book shares the miraculous way David Wilkerson rises from a very small town minister to becoming one of the most well known men in the Christian faith of the 20th Century (many young people may not realize just how famous he was).  But the book is more than just a list of dates, places, and accomplishments.

We learn how he was drawn to go to New York City to minister and how that came to be turned into a book and the movie starring Pat Boone.  He was much later to return to New York City and set up the church in Times Square.  We learn how Teen Challenge was begun to help addicts and a worldwide ministry to help the poor as well as pastors in other countries.

We learn how David Wilkerson struggled all of his life, not in wondering if Christ was real (for that never seemed to be an issue) but if Christ truly loved him.  If he was good enough.  The seeds of which began from being raised in an extremely legalistic denomination where his father and grandfather had been preachers.

We learn how he did not consider himself a prophet but definitely had prophetic words for America.  So much of what he wrote has come true that his books The Vision and Set the Trumpet to Thy Mouth now sell for quite a lot of money.  I have both of them on my bookshelves, kept for that very reason.  Not that they would be worth something someday (who knew?) but to reread because they began to come true.  Unfortunately.

This book is not only for those who were blessed by Wilkerson's ministry.  It will be an excellent read for Christians who have suffered a great deal.  For this man and his family did go through great trials and they came through them.  Not perfectly as none would expect that.  But with greater faith.

I can't recommend this book enough.  It blessed me very much.  Although my copy is an Advanced Reading Copy, it will go on my bookshelves to be read again.  More information can be found... here.*

This copy was sent to me by the Publisher for Review but the opinion is my own.

*All books links are Associate
Posted by Brenda@CoffeeTeaBooks at 10:12 AM

I remember him=s ministry and the movie from my high school days. I didn't know anything about the rest of his life. Nice review. Thanks. Pam (SD)

I, too, have a great admiration for Mr. Wilkerson, even though I don't share all of his theology. I do remember when I first read The Cross and the Switchblade and other writings by David WIlkerson---as a teenager. I would like to read this biography since it seems to be both respectful and honest.

His book led me to my relationship to the Lord. I will definitely have to read this book.

I remember reading The Cross and The Switchblade at around age 12. I know I've seen the movie, too. I think this would be an interesting book to read.

Our friend Denny went to Times Square Church for a while when he lived in NYC. Maybe I'll get the book for him for his birthday in November.

Thanks for the review!
Deanna

I grew up reading The Cross and the Switchblade and later actually heard David Wilkerson's nephew preach, as well as Nicky Cruz. I would really like to read this!

Thank-you for the book review. I first heard of David Wilkerson when his book, "The Cross and the Switchblade" came out. We have subscribed to his newsletter for years and have read many of his other books, as well. We always thought highly of him and were So sadden to hear of the accident the took his life. We'll,be looking forward to reading this biography!
Blessings,
Laura C. from WA