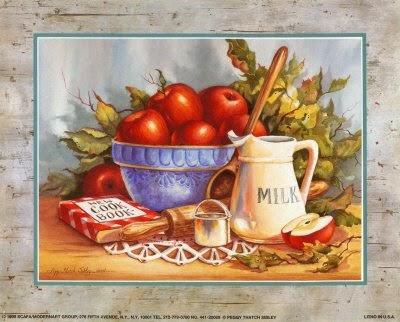 I was at the grocery store this week, picking up milk and cream for coffee.  Since it was close to dinner time and my husband had already said he was eating leftovers, I thought I'd see how much a pre-made sandwich would cost so I wouldn't have to cook.

Well, you probably know already that they are not cheap.   I was not going to pay up to $5.00 for one grocery store ham salad sandwich.  Thinking I could save some money and buy the ham salad already made, I went to the aisle where they sell it and found one pint was about $5.00.  I didn't buy it, either.

I started thinking later about the cost of having someone else make your dinner.  If I'm going to do that, I'm going to go all out and have a delicious Panera sandwich and good coffee for just a few dollars more than the cardboard grocery store sandwich!

But when you do stop to think of it, a nicer option like Panera can cost say $8.00 to $10.00 (especially if you are like me and have to indulge in good coffee while there). Then there is around $5.00 for the pre-made sandwich at the grocery store.

It gets a little better when you pay $5.00 for the pint at the store.  At least you will get two or three sandwiches from that, just adding your own bread and whatever else you prefer on your sandwich.

Problem with the grocery store brand is it has a little ham and a lot of mayo... which translates to not very much taste and more fat and calories.  All that for $5.00.

This line of thinking took me back to my mother working in the kitchen to make salads for the diner where she worked.   Ham was ground with the old fashioned grinder and mixed with the other ingredients in just a few minutes and it was delicious with no extra amounts of mayo added to make it cheaper.

Even more frugal was the use of leftover ham as she ground chunks of ham and turned leftovers into delicious sandwiches for the family for very little money.  She would be appalled at how much grocery stores are charging for their "watered down" ham salad, not to mention for the sandwich itself.

So, what is my point?

I think you get it since most readers are like minded in their pursuit of putting good food on the table as frugally as possible.  Knowing how to make food items yourself saves you money.  Knowing how to turn leftovers into good food saves you a heck of a lot of money.

Once again, knowledge is as important as what you have in your pantry.  Sometimes even more when the larder is lean (as mine tends to get!) and you want to make something delicious out of little.  Like grandmothers did just a generation or two past (according to how old you are at the moment).

Think of the genesis of macaroni salad, bread pudding, hash, hamburger gravy, sausage gravy and biscuits, scalloped tomatoes... just to name a few.  Past generations who had to stretch their food tended to know how to use everything.  My folks generation called it using "everything but the oink".

I'm still in the process of learning to cook more with beans, lentils, and other inexpensive but high quality sources of protein... and finding some things we like a lot and others not so much.  But those we like are being added to the menu and the pantry.

I'm finding as I make these frugal and healthy changes, the pantry begins to look more and more like it would have a hundred years ago with basic food stuffs and a little extras here and there.  More pondering on that subject soon.

I'm sharing a link this week that I was delighted to find.   One of my favorite chocolate cake recipes is the Wacky Cake (aka: Crazy Cake, Depression Cake).  So I was happy to find a young food blogger has been playing around with the recipe to come up with more options.  I'm going to try the lemon cake later this week.  (I do not mix the cake in the pan but in a separate bowl, then add it to the pan.)

The original recipes are good for two or three people and they can be doubled if you want to bake them in a 9 x 12 pan for more people.  I send you to Sweet Little Bluebird's list of recipes with the Wacky Cakes showing up first... here.

Image:  Cookbook and Apples; allposters.com
Posted by Brenda@CoffeeTeaBooks at 10:21 AM

Yup...lots of beans. We have been discussing why McDonald's is struggling just now along with some other fast food outlets. We think we have the answer...because that's where we have gone for a treat since we could afford that. Now we can not afford even that. Other restaurants have not been hurt as bad because their patrons still have some discretionary funds left. It is a good time to eat at home. Say, do YOU know how to make homemade noodles? =D

Hello, thank you for recommending Sweet Little Bluebird.I always enjoy your site whether Facebook or a welcome e-mail. I hope your day is good. Cecile P.S. when it says to choose an identity I hope I picked the right one.

So enjoyed this post! I've been making the chocolate crazy cake for years ... copied down all the variations and will now use them too. Thanks so much for sharing this!! Pam (SD)

Oh, I remember the Wacky Cake - "wells" for the oil, etc. I'm going to go to that site to see if they're the same as what I used to make.

Grocery prices here are off the charts. Bread is crazy high. Meat just about unaffordable.....

Thanks for the inspiration. Eating out is a real budget drainer. We try to keep it to a minimum around here. Much healthier to eat home prepared foods too!

Wacky Cake is our family favourite. It's so quick and easy to make.

My mother used to make sandwich spread with ground leftover meat. Sure takes me back.

When my boys were young, I made "ham salad" with a grinder as well...but I used a chunk of baloney, cut-up so that it would fit in the meat grinder. Also in the meat grinder, added onion and cheddar cheese. To the mixture added then pickle relish and mayo. YUM! Especially spread on leftover hotdog buns and slid under the broiler for a minute till cheese melted.

Supper on Thursday night was salmon patties made with canned salmon. Way too much for just the hubby and I so I always turn the leftovers into salmon salad by mashing up the patties, adding a little onion and some of my homemade sweet pickle relish and just enough dressing to hold it together. Delicious with lettuce and tomato on homemade whole wheat bread! My Mom never wasted anything, and I learned from the best!
Thank you for the crazy cake link! I've made the chocolate version for years but am very excited to try the other flavors. I love the small size, much better for us as we are now "empty nesters".

Like lejmom, we used bologna as well. West Ky. cooks used ground bologna, chopped eggs, sweet pickle and mayo. If we had it, my mom added a little celery, just a smidge.

This is so true! Many of us no longer have 'discretionary' spending money. I will check out that link to the wacky cake!

Luncheon meats used to be tasty but these days they aren't and the texture is...ugh. Now and then we splurge on the pricier deli meats and have sandwiches from those but mostly we don't. Mostly I make egg salad and tuna salad, pimento cheese, bake and slice a roast or chicken or turkey, have gotten very creative with peanut butter and cheese, and now and then we have meatloaf!
I've been shopping nearly exclusively at Aldi of late and this past pay period indulged in a piece of what appeared to be turkey breast portion to use as sandwich meat. I paid the $5.69 for the pound piece. Boy! It was not what I thought it would be. I'm never making that mistake twice! I'm going right back to my good homemade sandwich fillers