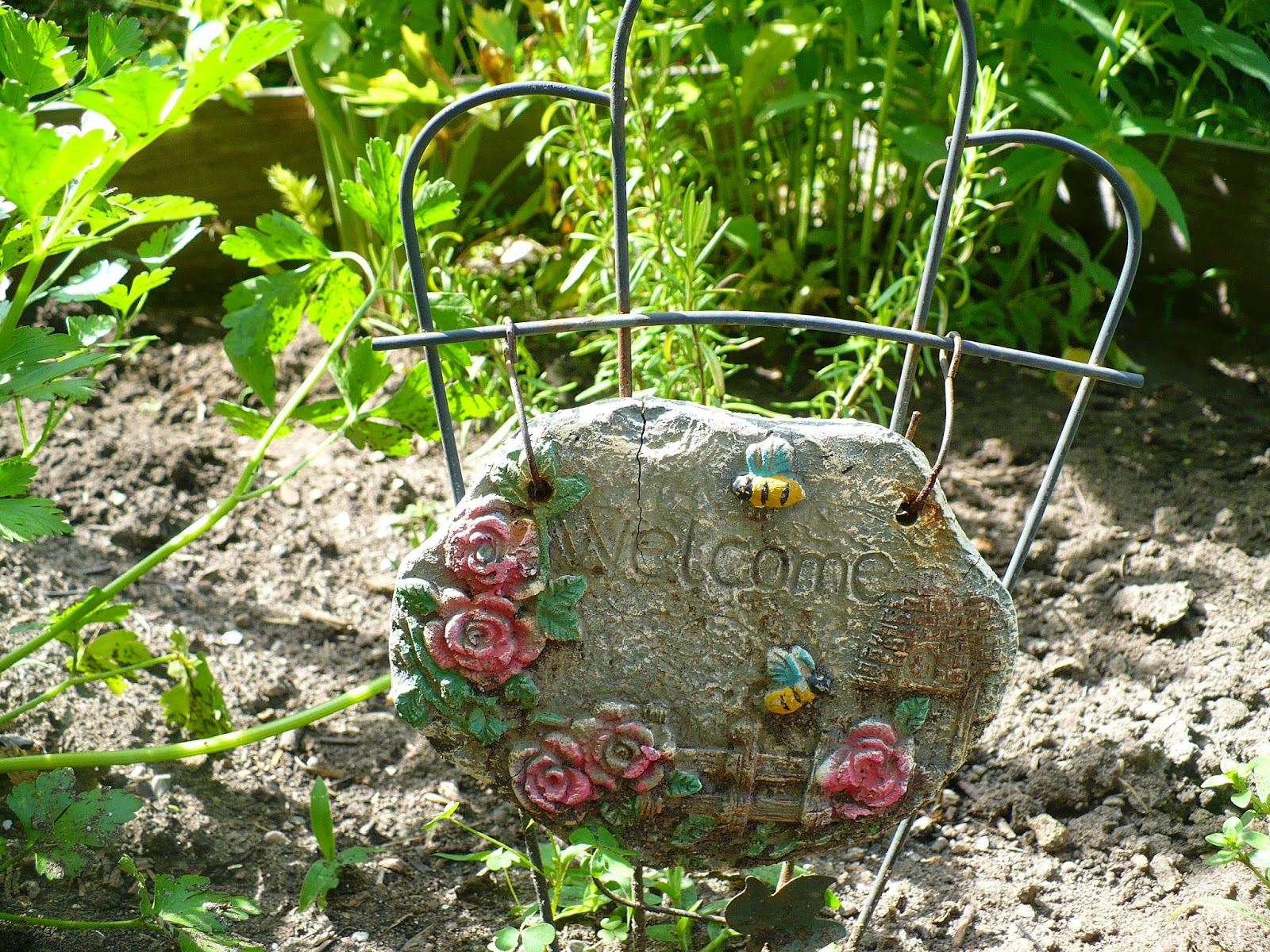 I'm showing photos of my garden as of this morning.  I know I recently showed it but hopefully seeing how fast it gives food for the table will inspire those who are thinking of planting a raised bed garden in your backyard.

Only half gets enough sunlight for tomatoes and green beans, the other half is the "shadow garden".  Which is nothing like a shadow government or "the Shadow knows".  ;)

My blood sugar is still quite wonky as we are tweaking the levels on this different insulin.  But having a raised bed garden makes it possible to still grow veggies even when I'm not feeling well.  Except for last year when I had the vertigo.  One does need to be able to stand up and kneel without keeling over to garden.  I still believe my neighbor thought I was tipsy when I fell over when trying to untie the garden gate last summer.

Before I start my Show and Tell, I want to send out a little reminder that deepening the pantry right now would be a very good idea.   I was quite surprised when a few different Christian TV shows this past week talked about the wisdom of "stocking up" on food and supplies.  I asked God if He was trying to tell us something?!!

This included a show I listened to this morning while doing dishes.  The program was showing a clip from a recent conference where one of the speakers was talking about the dire straight of the world's economy... and he said one way the average citizen could prepare in case of a job loss or civil unrest (which he says is possible if we have another economic collapse)... is to put some of their present income into stocking food, water, supplies we can't do without, etc.

He was more in-depth but it is pretty much what others have stated on links I've given here before.  And his financial advice was mainly to purchase property where one could garden and to put their cash into banks and places outside the United States.  I put most of my cash into Kroger's and BP or Marathon gasoline... in reality and not for stocks.

So here is what the garden looks like in early June. 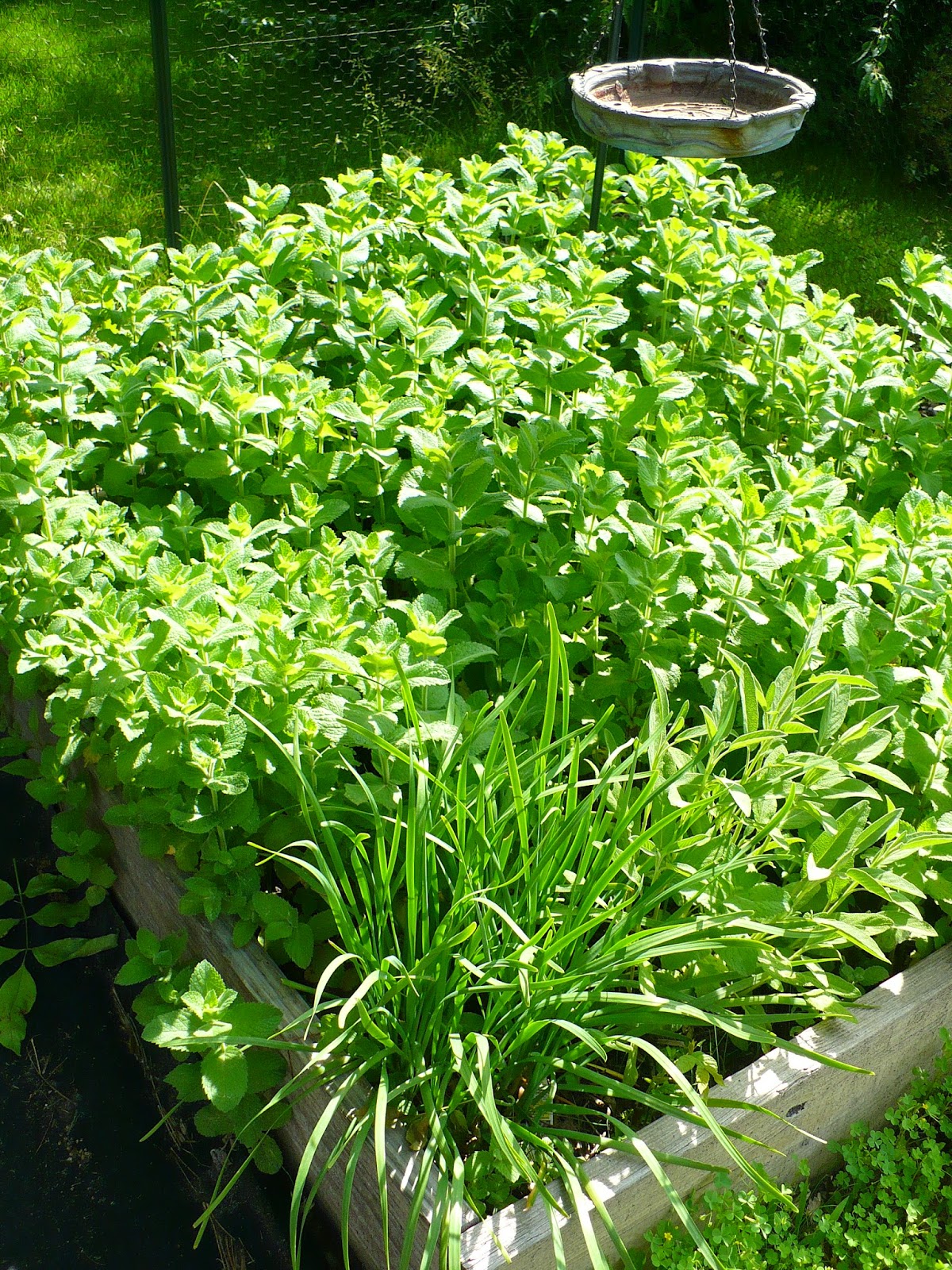 The garlic chives are glorious this year and you just see the sage tucked behind it.  This is how the apple mint looks after no less than three cuttings.  I'm not going to dry it this year (at least I don't think I am) so I'm using it all spring and summer.

It only receives dappled sunlight starting in June, which helps the mint as it does not like really hot weather. 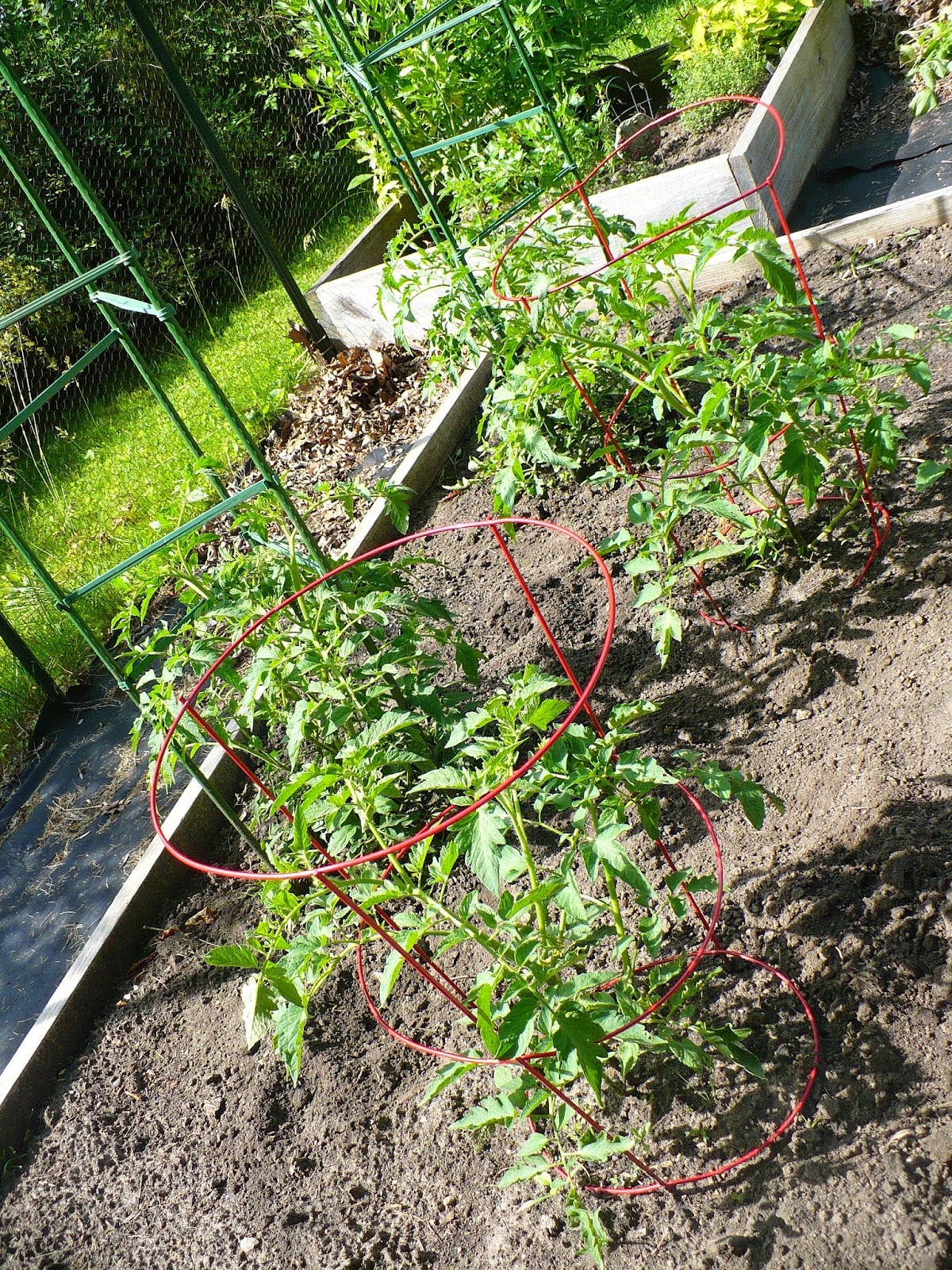 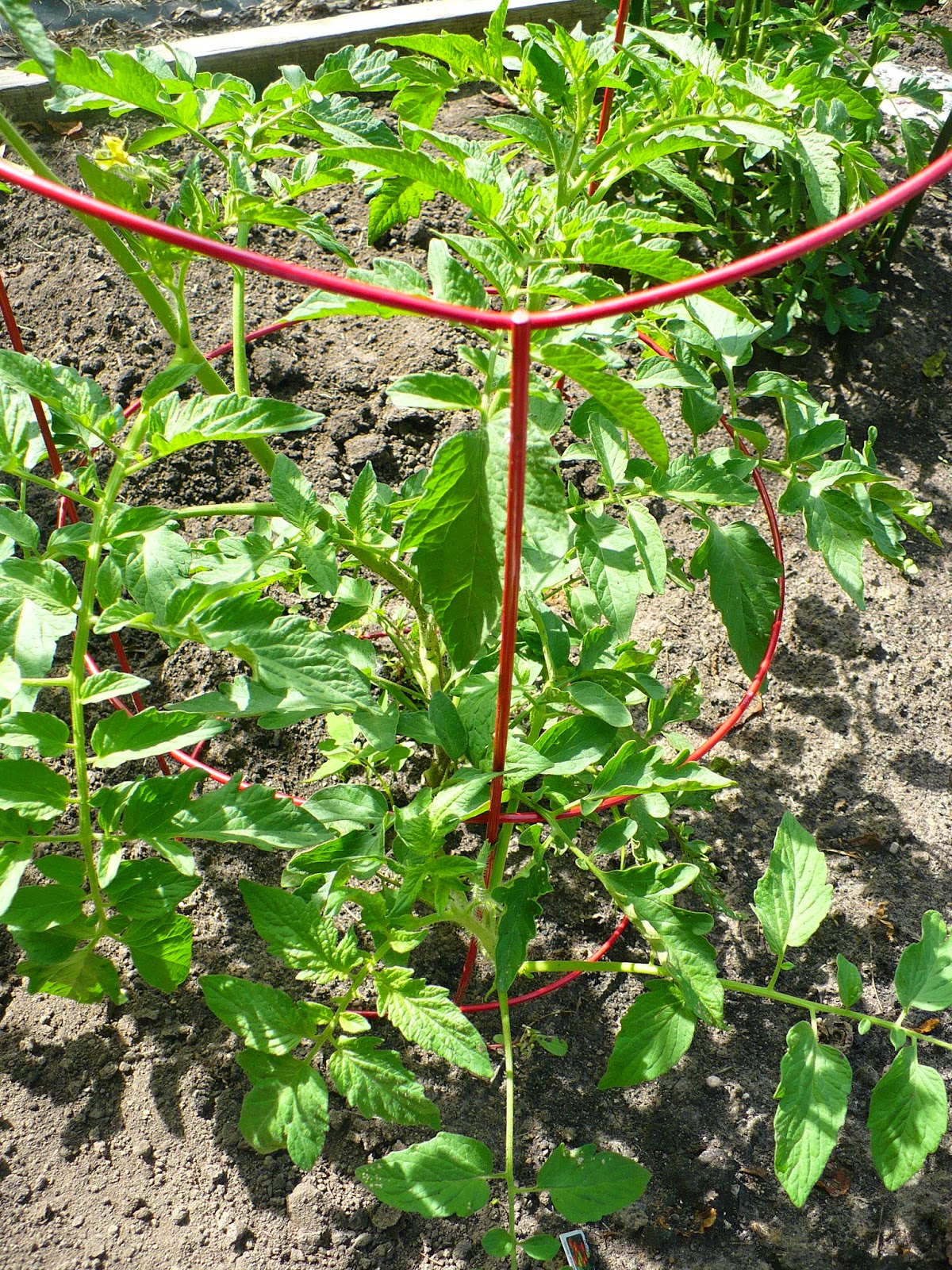 The tomatoes are beginning to grow nicely now that we've had some heat.  That plant in the bottom photo is one of two Early Girl plants I thought I'd lost in the extremely late frost.  So far the two of them look fine. 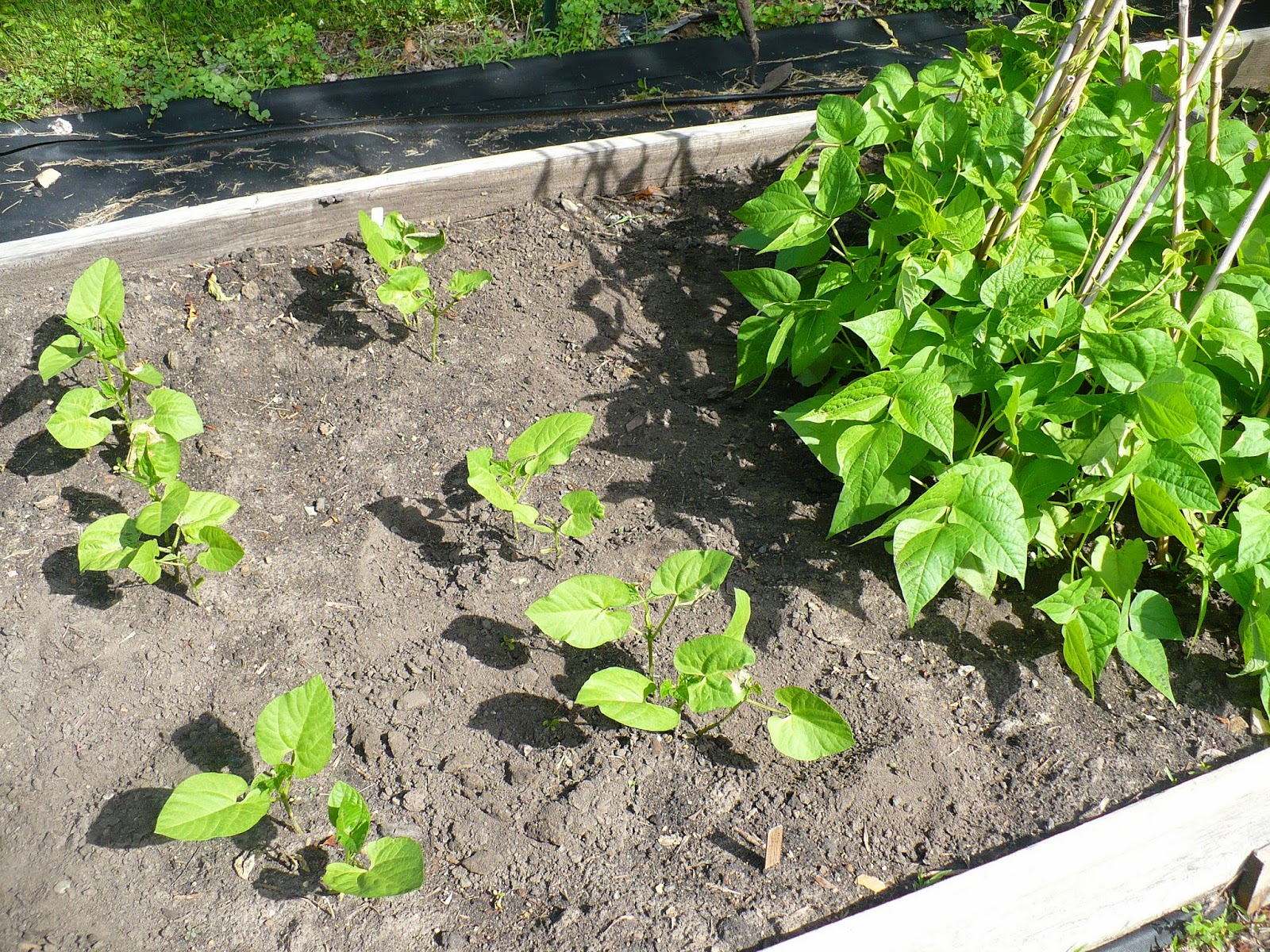 I have not thinned out the bush beans I replanted but they are looking pretty good.  I thought they were getting plenty of rain water but they looked a little peeked this morning.  So all the garden received a nice shower from the well water (via the hose) even though rain is in the forecast tonight.

I did thin out the vine beans after taking the photos this morning.  I hate to thin veggies.  But I know I should, especially when I planted extra seeds! 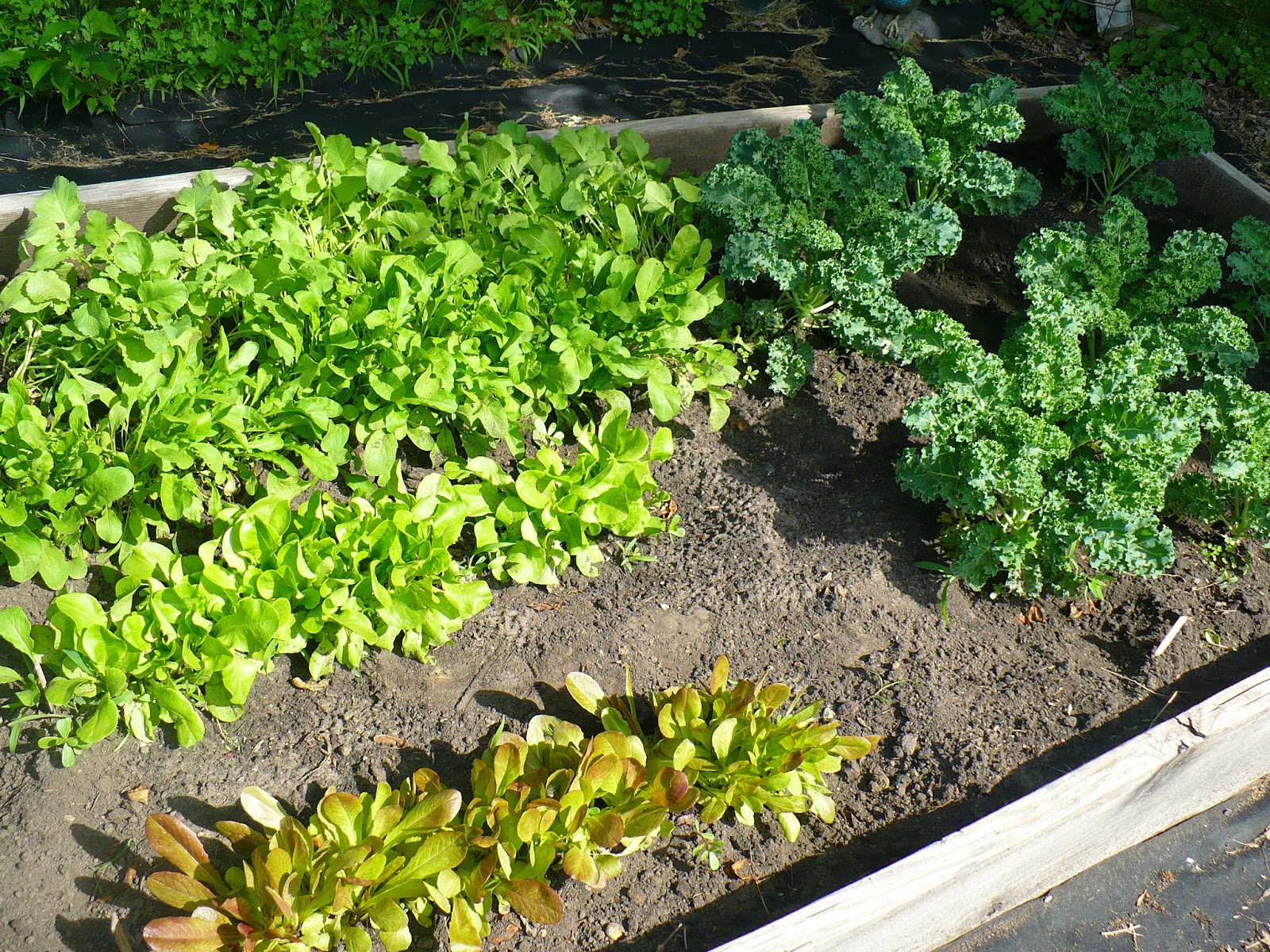 This is the other shaded raised bed and it is perfect for growing greens this time of year.  There are radishes, arugula, and two kinds of lettuce growing on the left side of the raised bed.  Obviously that is kale (eight plants!) on the right side.  All but the radishes can be harvested now for baby greens.

Next year... God willing and the creek don't rise... we will switch the kale to the left side and the greens to the right.  The shade definitely helps these cool weather veggies grow in warmer weather. 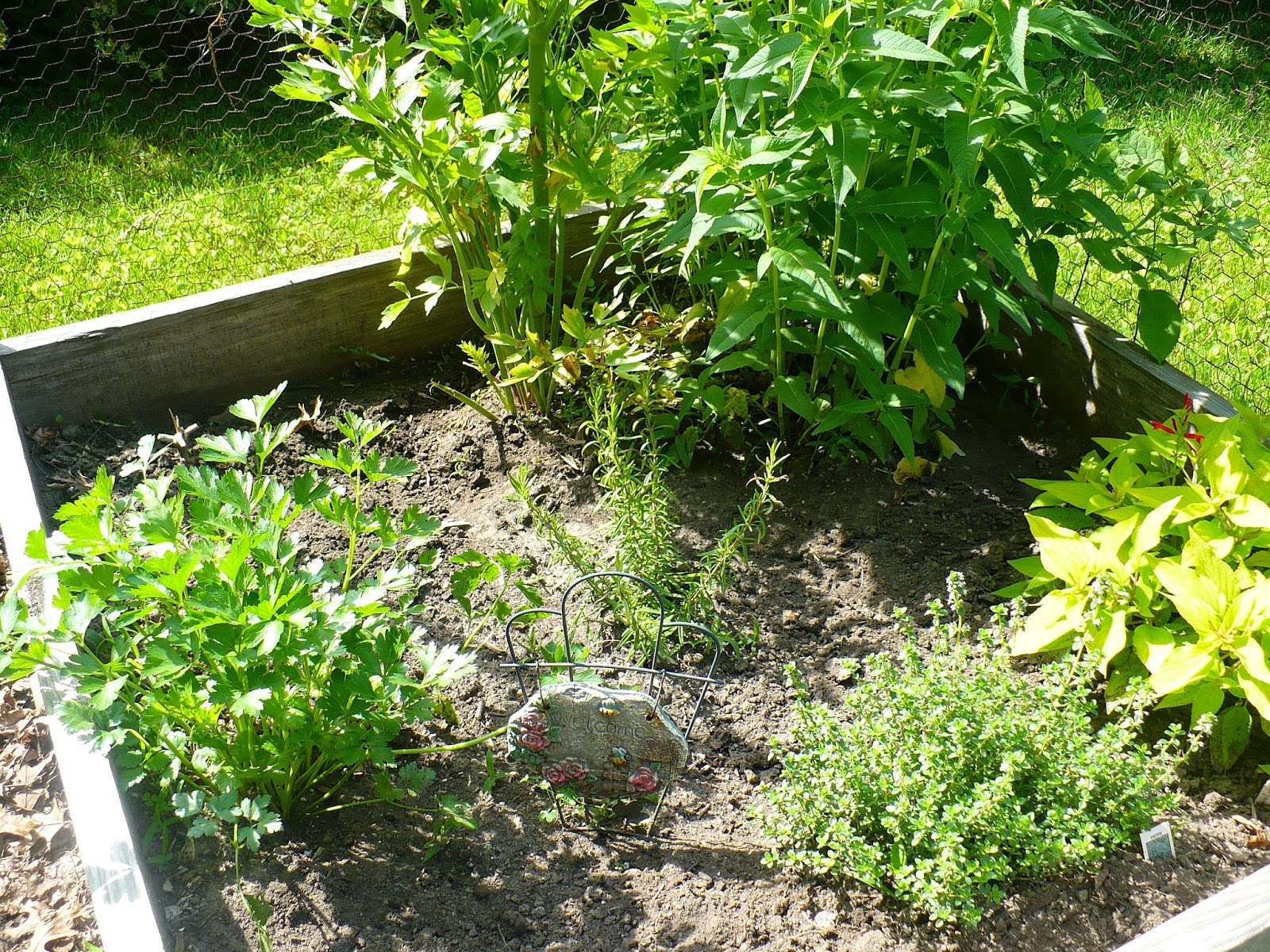 The "new" herb bed is really taking off.  That is lovage and bee balm in the back, pineapple sage peeking in on the right, lemon thyme looking all cute and bushy next to it, rosemary in the middle, and Italian parsley off to the left.

I'm thinking the rosemary does not like the shade that has come with the two back herbs growing so high this year.  So it may be transferred to a flowerpot on the deck.  I'm still planning on planting a few other herbs as possible.

I hope you like my Show and Tell and it inspires you to create your own raised bed garden,  Even a small one for greens and perhaps another small one for your favorite herbs is possible?  But don't plant anything in the mint family if you eventually don't want to give it your entire raised bed.  Just saying...   (I did it on purpose for apple mint tea.)

More to come next week.  Should the creek don't rise and all that.
Posted by Brenda@CoffeeTeaBooks at 2:14 PM

I would like some raised beds for veggies. Like you, half of my garden does not get major sun. Kale does thrive for me, and I always have tomatoes, zucchini, basil, etc. I like how my 2 blueberry bushes are yielding berries. Your beds look very productive.

I planted winter savory this year because it looked nice at the other end of the box that Italian parsley is in (!) OMG! I love it! It has a wonderful peppery flavor. Have you ever grown it?

We have always had some extra food put aside in food storage. I wish I could get the hang of this Arizona hot weather gardening. I may try a fall garden this year. Enjoy the rest of your weekend.

Ah your garden looks great, Brenda! Really wonderful. I would not put my money in banks outside of the US! If they crash then money anywhere may be pretty useless....But anyway, I wonder if you knew that one can plant green onions like the bunches we get from the grocery store and keep snipping the tops off for salads nearly all summer, and then just buy some more and start again. Last year I was so ill I didn't garden at all so I am enjoying my deck garden this year and have flowers, herbs and tomatoes. It does my soul good to just sit there and soak up the peace!

If you are not sure of how to garden in your areas you can check with your Agriculture Department for gardening information. Many of them even have Master Gardeners who have help lines and or web addresses to answer any concerns. Also the web can give lots of local information too. Most book stores in each state cater too to books for their areas. I have many just for S. California or desert gardening and also some that are by the month even. Most were found in used stores. The have lots of good information that pertains to just our soil and weather.Ask if your local newspaper has weekly local gardening advice. Ours does have several pages once a week. I have a friend who saves it for me.
We have had a pantry for ever it seems. First to help with a growing family and finances. To help when there were layoffs or illness. Then too for the economy and possible glitches in it. I keep hoping I can thin it way down and not worry any more. Then always some thing comes up that scares me into keeping it. :-) Always. :))) With just the 2 of us it seems a waste in some ways but nothing goes to waste really. thanks for spreading the word. I feel your keeping this idea in your writings will help many. I can't tell you how many sources of impending doom I have heard even more so the last two weeks. Coming from many different areas of concern. You may be right...Maybe He is trying to tell us something. Sarah

Hi Brenda,
Your garden looks lovely!
It's been my experience that rosemary likes it hot and sunny and fairly dry - it's native to the Mediterranean area.
We have a large garden in the Great Lakes area of Ontario. I would love it if our tomatoes looked as far along as yours! But I know they'll come along. I can taste those toasted tomato sandwiches :-)
Blessings,
Marie

I try to have a deep pantry, but it's small right now. I am going to build it up again.

Our tomatoes are growing well, so are the peppers. Our garden is small this year, but I'm okay with that for this year. You do what you can do.

On another note, I thought because of the super cold and long winter, that I may have lost my Strawberries. But we are getting the best crop we've ever gotten, lots of berries and I am thankful ! I just made two quarts of freezer jam. Yum!

Your garden looks marvelous! Are you juicing with all the kale? My raised bed is pretty funny...a clump of chives, two tiny tomato plants, and a wee bit of rosemary. At least they are in the ground...more than I could say last week.

There is such richness in all that growth - food for homemade meals that truly nourish. I'm glad that after last summer's health limitations you are enjoying being back in the garden again. I trust you have your insulin back in balance soon.

I'm all for stocking up, being frugal, and raising your own food when practicable. But that one guy needs a reality check, big-time. Most folks can't afford to just go out and buy land. As for investing outside the US, what foreign country does he suggest--Nigeria? He sounds like a member of the 1% who has no idea how the other 99% lives. I hope his "advice" isn't typical of what Christians are getting these days, because I can't believe it's coming from God.

I've heard those raised square foot gardens can produce quite a bit. I only have tomatoes, lettuce and a variety of herbs. we have to do a little more deepening of our pantry too.

Your garden looks beautiful! I wish my kale would take off like yours.

I had a rosemary plant in a container for years. It likes it hot and dry as far as I can tell.

I found apple mint for the first time and bought some to plant in your honor. Thank you for sharing your life with us...love your Saturday and Sunday posts! Now the mint will remind me to pray for you!