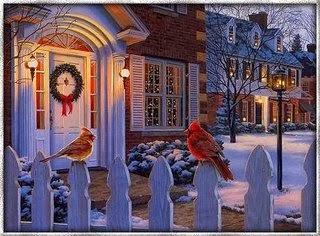 Sometimes you just have to step out in faith.  You know... the doing before the feeling.

That is what happened during the Advent season for me this year.  As I have written, I came into the whole thing less than enthusiastic.  Partly because of the real emotions which come when family is not part of your everyday experience, anymore.  But also just because I felt... blech.

You don't know that blech is just a notch below blah but not quite as bad as bah humbug?

I personally wouldn't have minded one of those long winter's naps beginning the day after Thanksgiving and waking up say... Easter.  Not a coma from an injury but a nice, cozy, comfortable very long nap.  But I am the chief cook and bottle washer so that is not going to happen.

It is a good thing to finally be in a mood where I can enjoy this special season.  It was always my favorite.  The period from early October through January 1st to me held the most magical opportunities of the year.  From the beauty of the crops and fields and trees in October... the Feast of Thanksgiving... the anticipation of Advent... to the clean slate of a brand new year.

I had to run errands Friday morning, the most essential to pick up insulin and prescriptions before the anticipated snowstorm was to hit (our world still looks like Narnia).  As it was one of those rare times I was "in town" that I didn't have a time constraint, I stopped by the Goodwill there to see if there were any treasures.

But what I was thinking about while pushing the shopping cart was the music.  The grocery store had been playing beautiful Christmas music in the background and so was Goodwill.  Music which glorified the Savior.  God will have His remnant of days as well as people.  A Light does shine even in darkness.

I have decided rather than calling my current Christmas seasons quiet, I will call them... cozy.   For I do remember many seasons when I had very young children that I would have given just about anything for some peace and quiet.  :)

What is a cozy Christmas?  Well, for one thing to enjoy it one must come to accept it as a gift and come prepared for all things cozy.  There must be some hot beverages available, a few Christmas books, a stack of Seasonal DVDs, and lots of the music of the Season.

In my home, I must have a tree to light in the darkness and candles to flicker at night.  When one does not have a fireplace, they at least can have candles.  It helps to have a cat or a dog or a bird or perhaps a bunny.  But not all at once, at least inside.

There is an old throw for the sofa, one which was a gift long ago when I was on staff for our former church.  Given by a parishioner thanking me for a kindness shown.  It is getting ragged and I should replace it but it is still quite warm.

And to think this Season it all came about because I took boxes off their shelves in the garage even though I didn't feel like it.  How often through life does He have to teach me that same lesson?  That feelings do not have to control my life?  I expect it will be a lesson learned again and again until I go to be with Him face-to-face.

The lesson that by doing... within limitations, of course... we can change our feelings and be lifted out of the doldrums.

I heard a story on K-love which reflects exactly what I have been learning.  Callers were sharing their Thanksgiving plans when a woman called complaining about the season.  She was a single mom and her ex-husband would have the children for Thanksgiving.  She had no family around so she was spending the Holiday alone at home.

The young woman who is a DJ at that time of day began talking to her, sharing how her child would be with her ex-husband, too.  But she had decided to spend that day helping women worse off than herself so she was spending Thanksgiving serving a meal at the women's homeless shelter.

Once again, the young DJ... by choosing doing over doldrums... affected the attitude of everyone around her so much that her story has stayed with me long since I heard it in November.

So I accept my limitations and stay home quite often but when I do get out... there is the music and the decorations and the Beauty of the Season to appreciate. I choose to live life as it is and embrace the possibilities within limitations.

Christmas can be very painful for many.   There is no Peace on Earth, yet.  Has God placed you in a position to be a Blessing this year?  Ask Him.  He will answer.  And you just may be surprised at how you will be blessed as you become a blessing.

Image:  Winter Scene
Posted by Brenda@CoffeeTeaBooks at 8:37 AM

Thanks for sharing the hard bits of the season and the cozy bits as well. I am praying that Jesus meets you right there in a special way today, Brenda.

I love this post - just the reminder I needed to read today.

Beautifully said, Brenda. I feel the cozy and the peace and contentment in your words.

Attitude is what makes the difference, and you are so right that we have a choice in how we deal with each situation.

You will inspire many with your comments, today.

Hi Brenda;
Another lovely post! What an inspiration your words are. Today I was running myself ragged trying to prepare last minute things for Christmas and soon realized how wrong that is! I will try to slow down (easy to say now that I'm almost done) and truly try to be content. I never thought of cozy, and I really love it! Love and Hugs, Nana

I remember being intrigued by reading once that our type of education says, "Get the children to feel the right feelings and the right actions will follow", and that Japanese education said, "Get them to do the right actions and the right feeling will follow". I don't believe either is always the right way. But the difference is..interesting. I hope you will be full of Christmas feelings now, Brenda! We are celebrating the Incarnation! Blessings to you and your family and friends!

Christmas is so hard for so many; Merry Christmas to you, however you spend it.

Dear Brenda,
Your blog posts are a like a beacon of light shining in my little corner of blog land. Thank you for your beautiful words.
Wishing you and yours a very merry and beautiful Christmas
Laurie

Your honesty is always refreshing. I'm more inclined to have the blechs and the blahs in the bleak midwinter. It does make me smile that the anticipation is building.

blech season it diffently is. Have you been eves dropping? We need to have tea. I definitely want to be a bear and hybernate.

Brenda, I too was having a hard time getting into Christmas this year. Like you I love October through January 1st, but this year I just could not get in the mood to decorate, bake or shop. For me I know its in part the fact that our oldest daughter will be getting married soon after the first of the year and moving four hours away. We will have a very empty nest as she has been living with us for the past four years. On one hand I'm quite okay with the change and happy for her as she has many health problems and challenges and we are so very thankful to see how far God has brought her and how well she is doing. Still it will be hard to have both of our girls living out of the area. Thank you for the post..it really helped to know I am not alone in having the "blechs"..